We’ve finally done it! 9 months in the planning….. 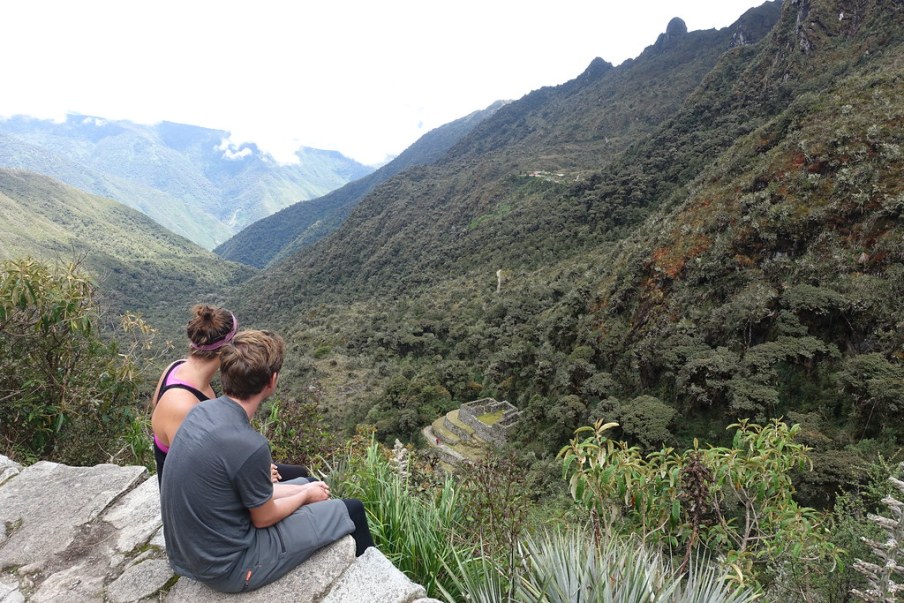 The Inca Trail to Machu Picchu is complete and ticked off our bucket list.

Peru is finally here! I’m so excited- I’ve wanted to come here for so long and we actually made it. Peru has fascinated me for a long time and the Inca trail even more so. We arrived in Cusco from Chile, 2 days before the trip began as it’s necessary to adjust to the high altitude for a few days beforehand. Although we’ve been at altitude in Chile, this was on a different level- as soon as we stepped off the bus it was harder to breathe and even a 10 minute walk into town was hard work.

The Inca trail is a 43km ‘path’ that leads to the spiritual home of the Inca people, Machu Picchu. The trail is the original path that the Incas built so that pilgrims could visit Machu Picchu around 500 years ago. It’s a 4 day/3 night trek that’s only accessible with a guide- new restrictions means that everyone needs to have a permit which is linked to your passport.

We’d planned our SA trip around this as you have to book around 7 months in advance to get onto the trail. The government limit the number of trekkers to 500 per day (including all staff) so that means only about 60 trekkers can start the trail each day. For months we’d been looking forward to it and it did not disappoint.

We decided to go with Peru Treks, which we thoroughly recommend to anyone- they were absolutely brilliant from start to finish. Originally our friend Mab was supposed to come from London and and walk it with us but unforseen circumstances meant he had to pull out last minute- we were all gutted as we were looking forward to catching up, but c’est la vie.

In our group there were 15 trekkers, 2 guides (the very enthusiastic Ernesto and Edy,) a chef and 19 porters. The porters carry pretty much everything except your personal items- they had massive packs full of tents, folding chairs, pots, pans and food. Recently the government has imposed a limit on porter carrying weight so that they now only carry a maximum of 25kg- they used to carry upto 60kg! These men are seriously superhuman and without them we would not have been able to manage. Some people on our trek also chose to pay for an extra porter to carry their sleeping bags, mats and personal items- we didn’t and on reflection we’re glad we didn’t because we felt a huge sense of achievement at the end. 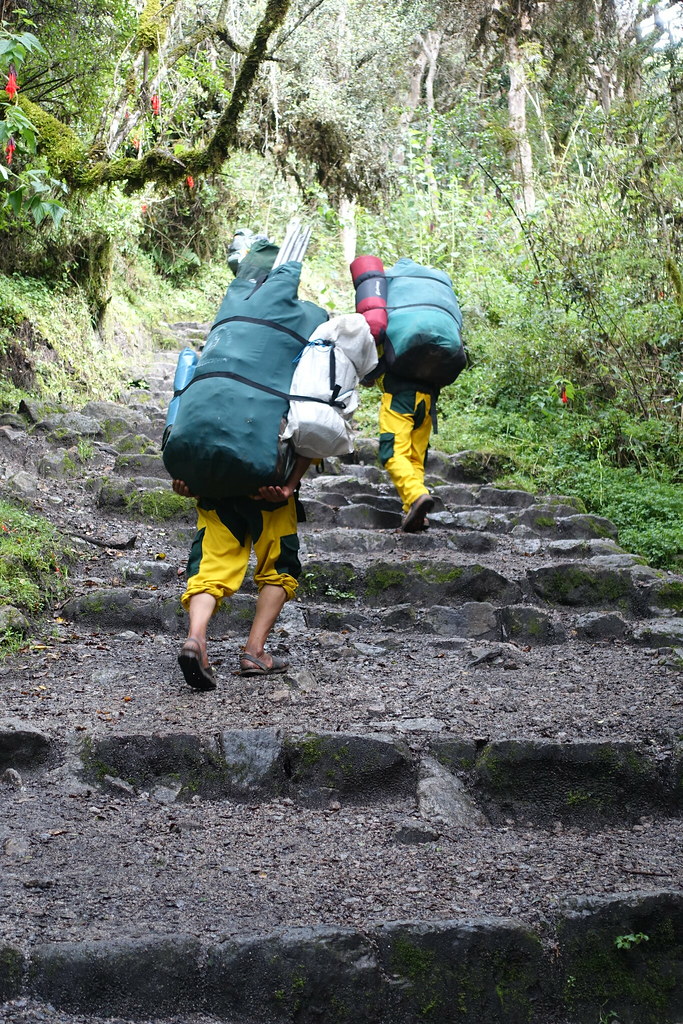 This is one of the lighter loads we saw!

We were picked up at 5am and taken by bus with 13 other trekkers for breakfast in the little town of Ollytatambo, around 1.5 hours from Cusco. We stocked up on snacks and coca leaves (great for altitude) and zoomed off to km 82, the official start of the world famous Ina trail. 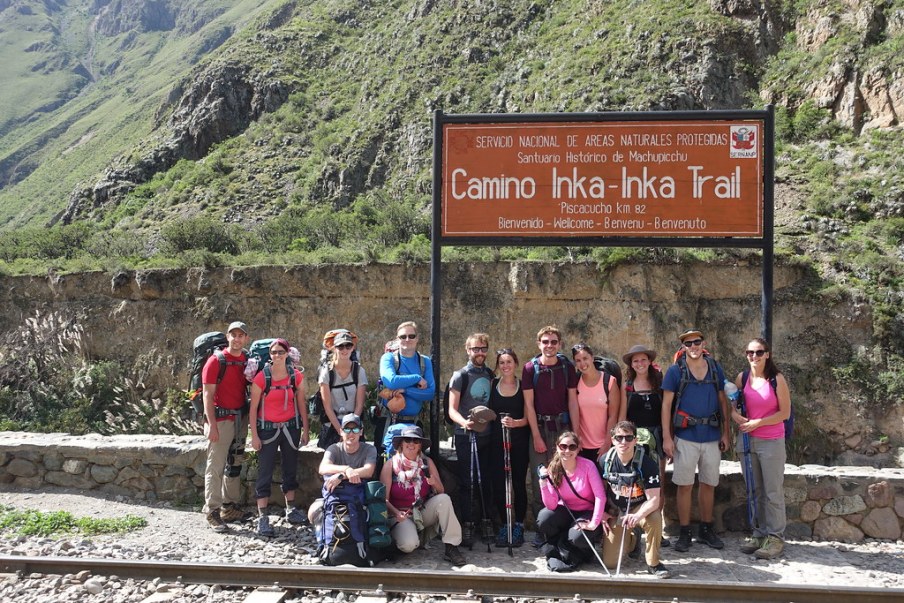 The other people in our group came from all over- Finland, US, Ireland, NZ, Nederland’s and Belgium.

Our two guides, Ernesto and Edy had given us a briefing the day before so we knew that day 1 would serve as a training day for the next few days- only 12km today and it was fairly flat in places with only a few steep ascents and descents. The scenery was incredible but so far, no Inca ruins in site. Our guides stopped us often to tell us interesting facts about the Incas. After around  4 hours hiking, we stopped for lunch- we expected a sandwich and sitting on the grass, but this what we got instead: 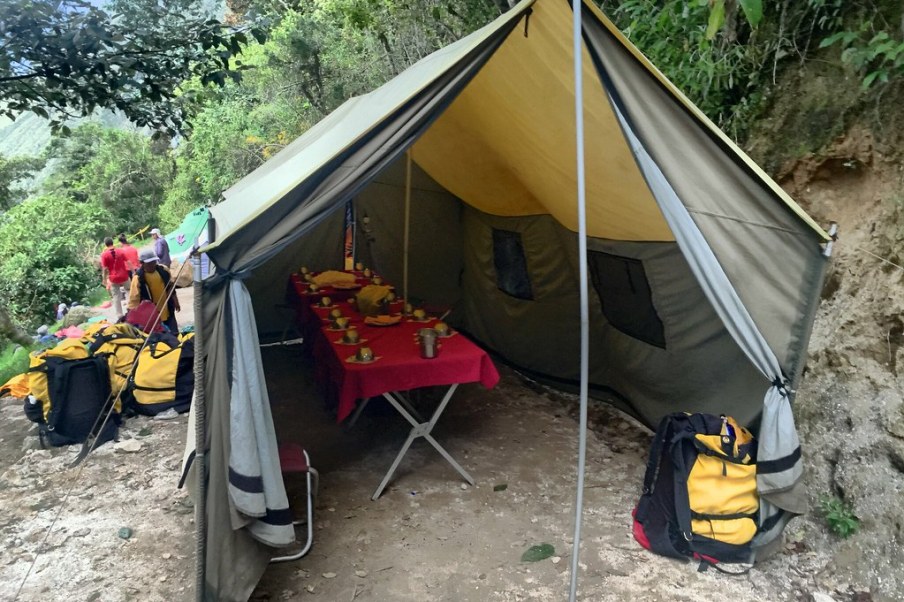 This tent appeared at every meal time, thanks to the porters. We felt so spoilt and ridiculously well looked after. The food itself was incredible. I have no idea how our chef managed to prepare 3 courses for every meal, but he did and it was fab. He put on his chef outfit and went into his little kitchen/tent and managed to cater for so many dietary requirements- I’m really fussy about where meat comes from so opted for vegetarian the whole trip whilst Sam obviously went full on meat mode. There were some gluten free and soya free people on the hike also- none of us ever had cause to complain.

We camped in a really pretty field in super roomy tents. Was lovely. Due to the high altitude (we were camping at around 2700m above sea level,) we were all exhausted and went to bed super early. The higher the altitude, the more oxygen you require so the harder your body has to work. We knew we were going to be climbing upto 4200m the next day and were all slightly wary, despite taking altitude sickness tablets. 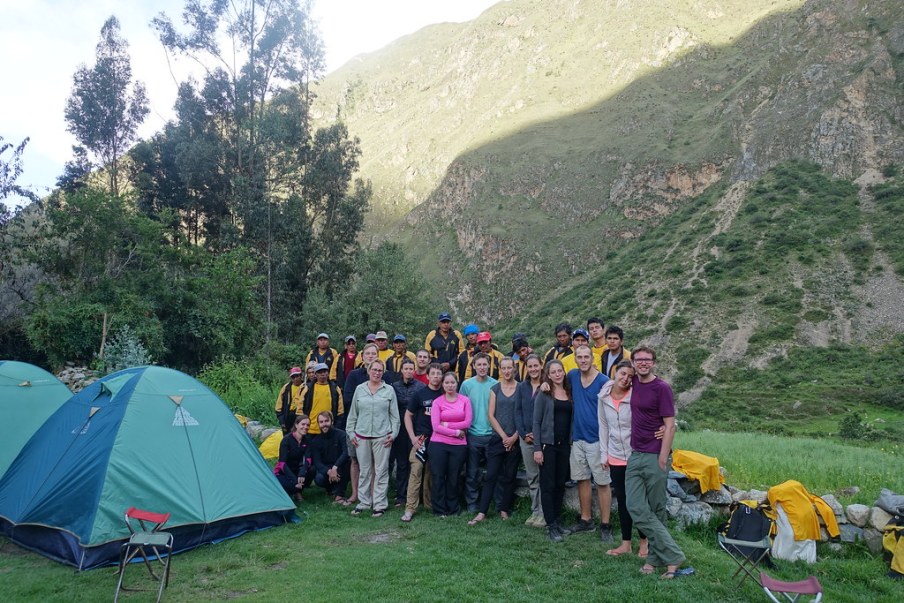 What was not so lovely was the 5am wake up the next morning- although they did bring us coca tea when they woke us up so it wasn’t all bad. Coca tea is most similar to a bitter green tea and Andean people drink it in copious amounts. At 6.45, we set off for the most difficult section of the trail- a 1500m ascent to Dead Woman’s Pass. This was not easy. We had to keep stopping every couple of minutes to adjust to the altitude, which meant it took a lot longer than we would have liked to make it to our first resting spot. Luckily, the tent was up and brunch was served, yippee! This gave us all the energy to reach the top. In our group there were some people who shot off super fast and others who needed to take it slower, so each break was a chance to regroup and catch up with everyone. 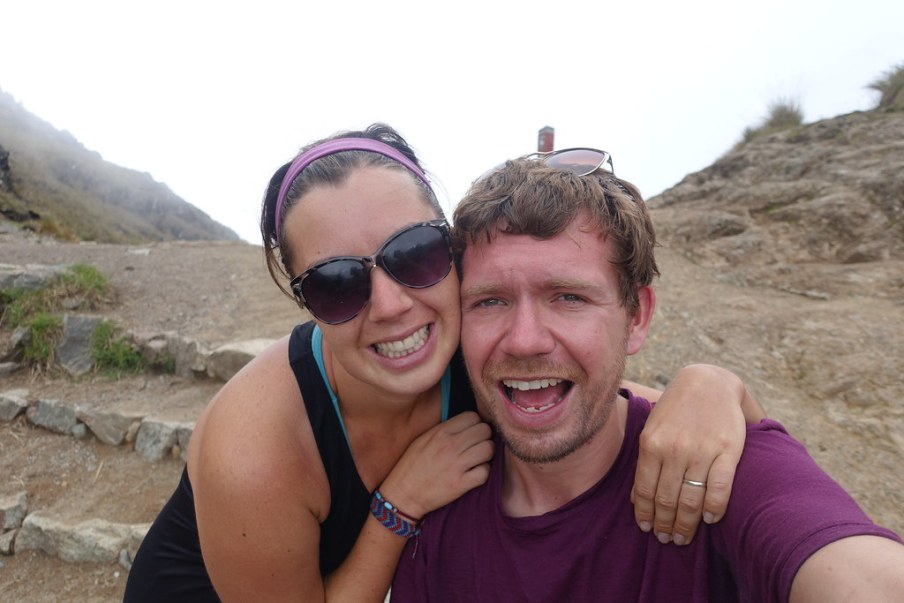 From Dead Woman’s Pass, we then descended steeply around 700m to our campsite.This took around 2 hours and surprisingly for us, didn’t affect our legs as much as it did others. Usually I have issues with steep descents but was actually ok for this one. I think it was the knowledge that my sleeping bag was waiting for me! 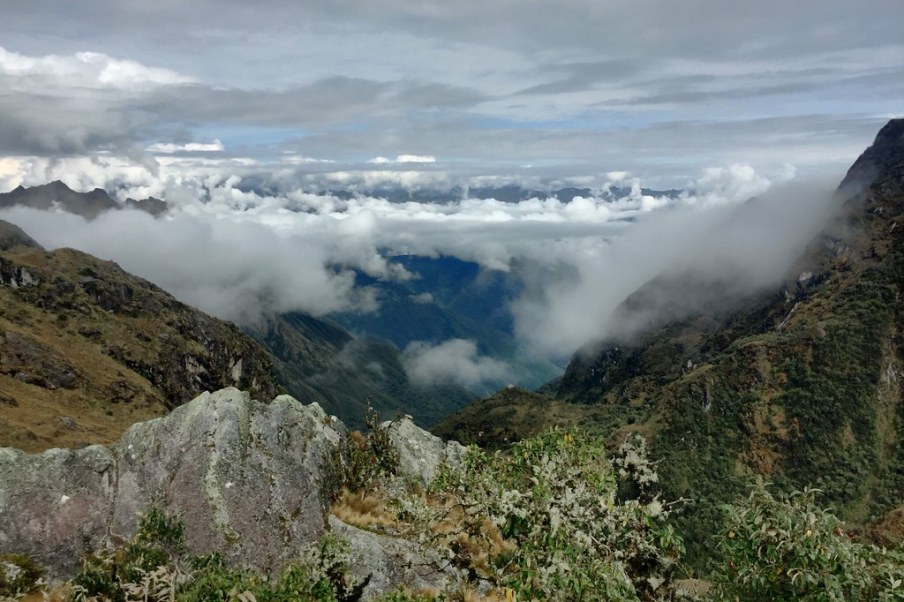 Another 5am wake up! If we’d been able to sleep, this would have been bearable but none of us slept well- there were frogs singing really loudly the whole night, an uncomfortable concrete floor and a slanty camping spot which meant I ended up rolling into Sam a few times. Day 3 was llonnnggggg- only 15km but it took a long time because of the terrain. 2 more steep ascents and the ominously named ‘gringo killer’ steps- over 1000 steep steps down. Painful. This was when it started to really feel like a path the Incas would have taken though, so many beautiful original ruins along the way. 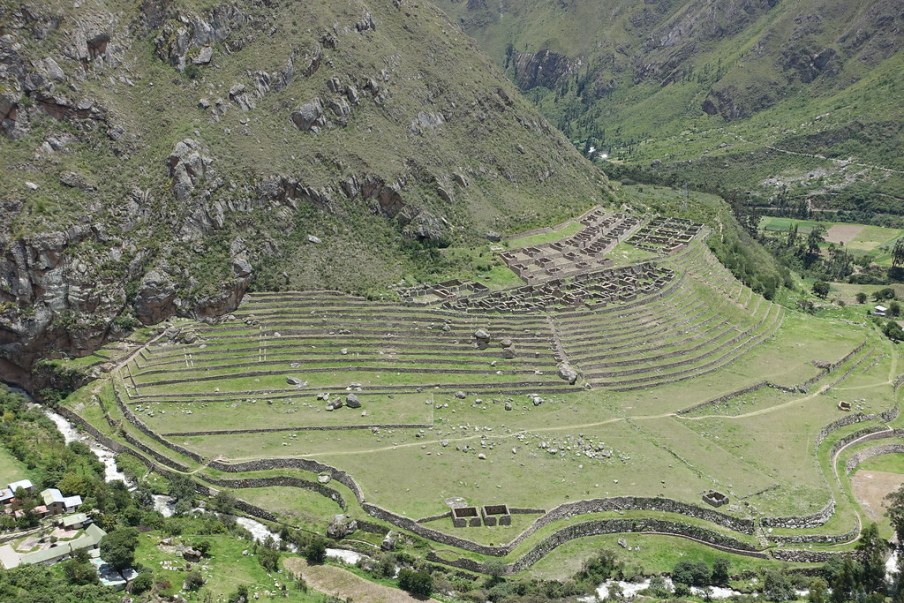 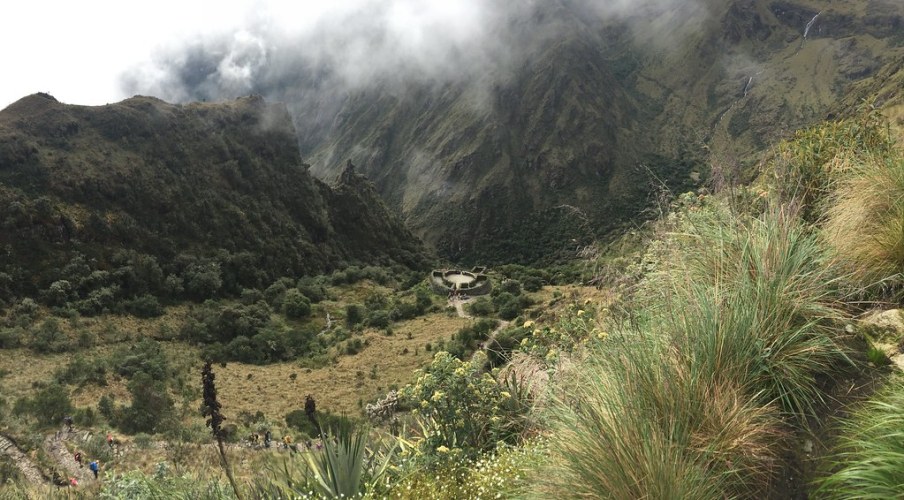 Our guides let us stop at each one to explore and give us information so even though it was a long day, it was brilliant. Our final campsite for the trip finally came into view at around 5pm. This was a really busy site because everyone camps here on the final day as it’s only 2 hours from Machu Picchu itself. Along with this, people who do a 2 day/1night trek also camp here (weaklings.) Chef outdid himself tonight by making us all a huge cake to celebrate the end of the trip (where did he get the oven from? We don’t know.)

5am? Too late apparently. A 3.30am start followed by 4am breakfast awaited us as we struggled through the torrential rain to get ready for the final hike. The weather so far had been amazing, with fantastic visibility but now it seemed the rainy season had caught up with us. As soon as breakfast was over, the porters dismantled tents and rushed off to catch the 5.30am train back to Cusco, leaving us standing in the dark with our torches, backpacks and very wet feet. Regulations state that no one can walk the trails before 5.30am because it’s too dangerous in the dark so we queued up with what felt like hundreds of other people at the control gates.

When we finally got through, all of us were really excited because it was only a 45 minute hike to the Sun gate, where all of the famous Machu Picchu photos are taken. On a clear day you can see the whole city below you. This is what we saw when we finally got there: 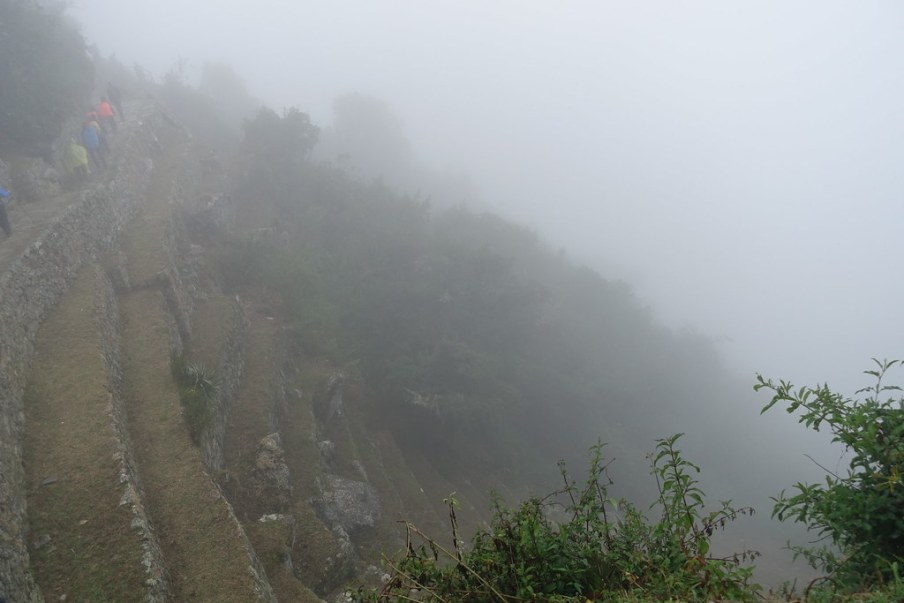 Not exactly postcard material is it?!

You could almost hear a collective sigh of disappointment from everyone. We’d trekked so far to get this view and all that was there was clouds! Never mind, it was still amazing to be there and we hiked down into Machu Picchu itself. It was absolutely staggering to see and as we descended it was hard to take it all in. It was like when we went to Angkor for the first time- so incredible and although you see it on TV and in photos, nothing prepares you for it.

The city was discovered in 1911 by Hiram Bingham and was in disrepair when he got there. I imagine it was like whats some of the Angkor temples are still like- overgrown. However, the government decided to ‘fix’ it, and although what they’ve done is very impressive, the repairs do look like a rush job compared to the skill of the Inca people: 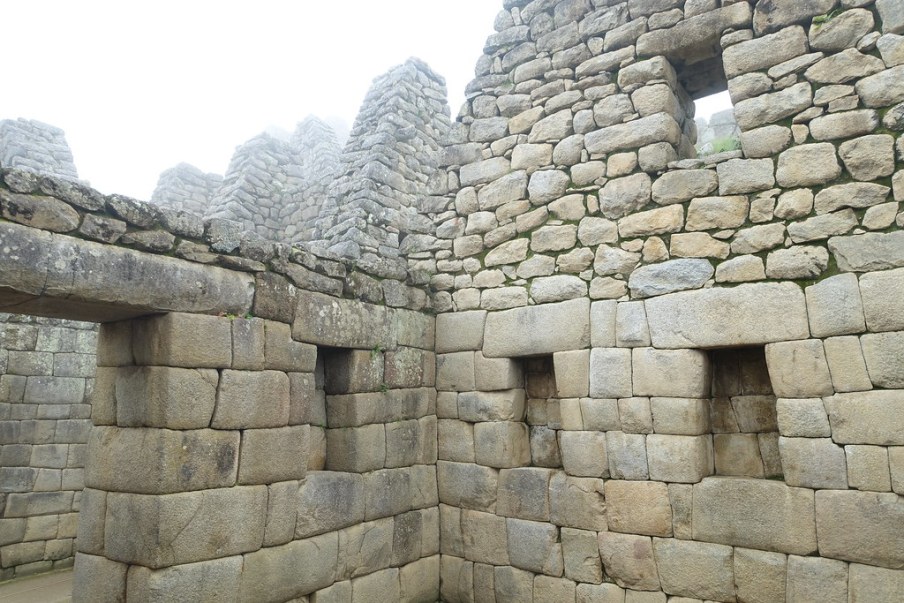 Only the most important Inca people lived in the city- the king, priests, royal attendants etc. It’s so impressive how they’ve made this whole city on a side of a mountain. The photos really don’t do it justice. 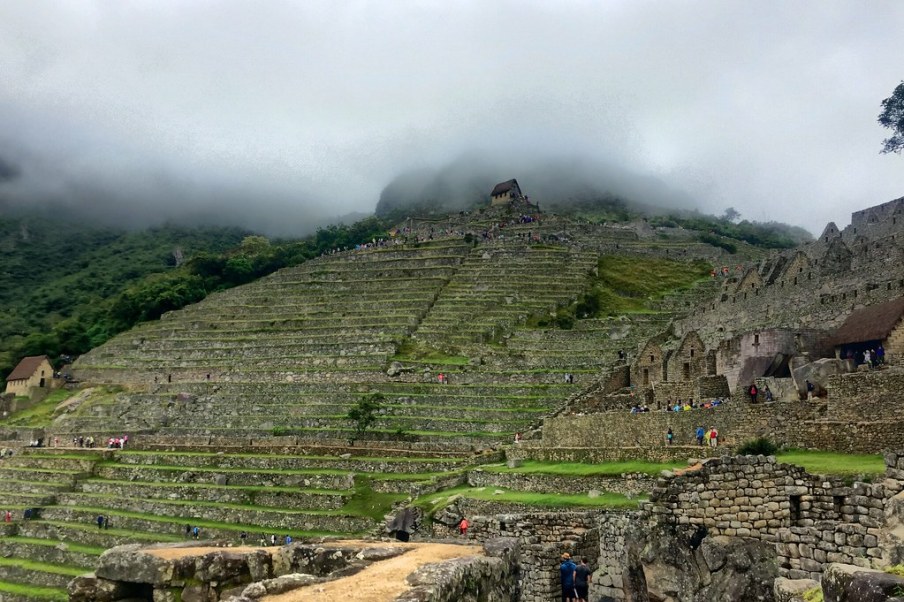 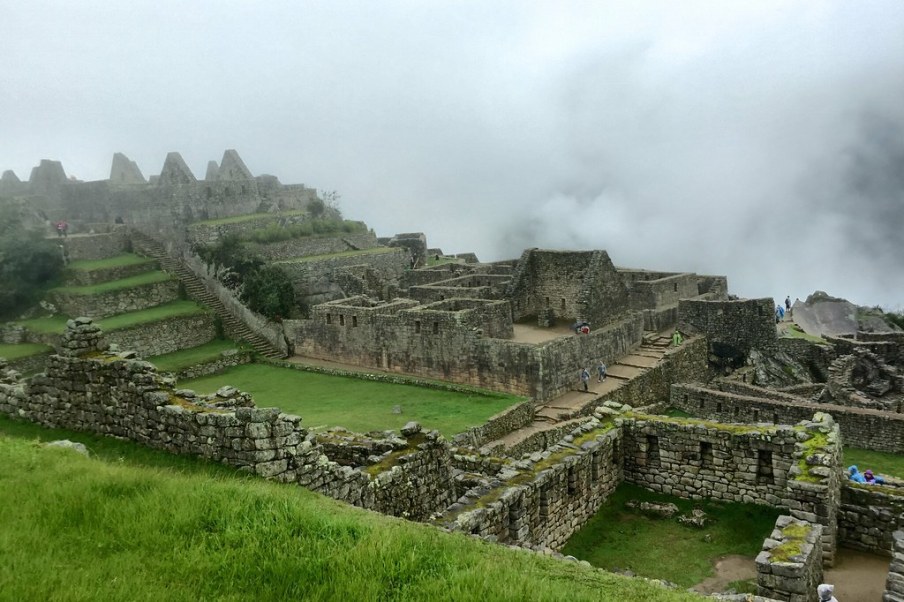 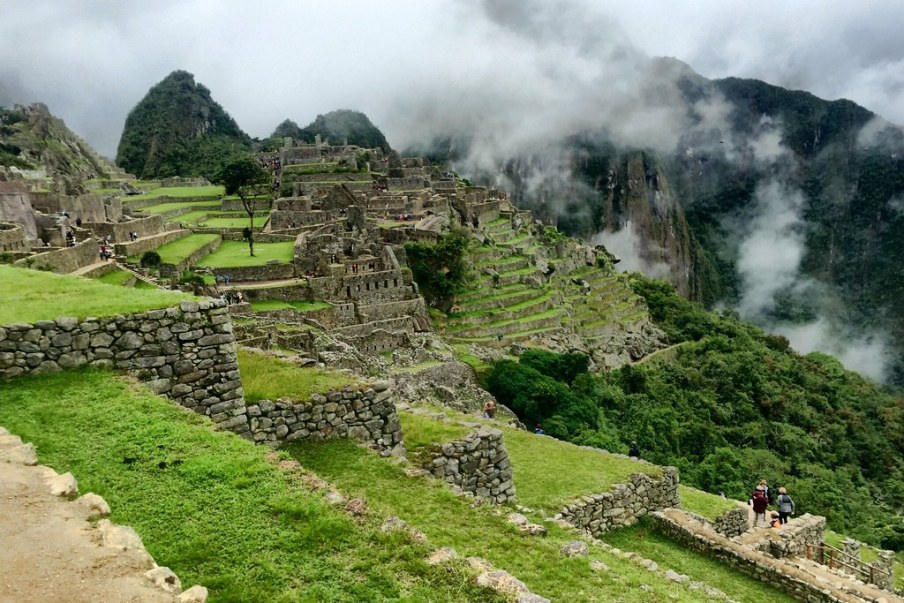 We dropped our bags into storage and our guides gave us a 2 hour tour of the main sites. Just as we were about to leave and explore on our own, something totally unexpected occurred- one of the guys, Nick, proposed to his lovely girlfriend Danielle right amongst the ruins! It was so great to be a part of- what a fantastic way to get engaged! It was crazy busy as it was the first week of the season and made it quite frustrating at times.

After a couple of hours exploring, we headed to the town of Aguas Caliente to meet up with our group for celebratory drinks and food. Then it was back to Cusco we went, via train and bus, all exhausted, dirty and having had the best experience.

Although Machu Picchu was spectacular, it was the trek that made the trip. This was truly a once in a lifetime opportunity and it’s hard to imagine how we’re going to top it. A definite highlight of the trip so far. 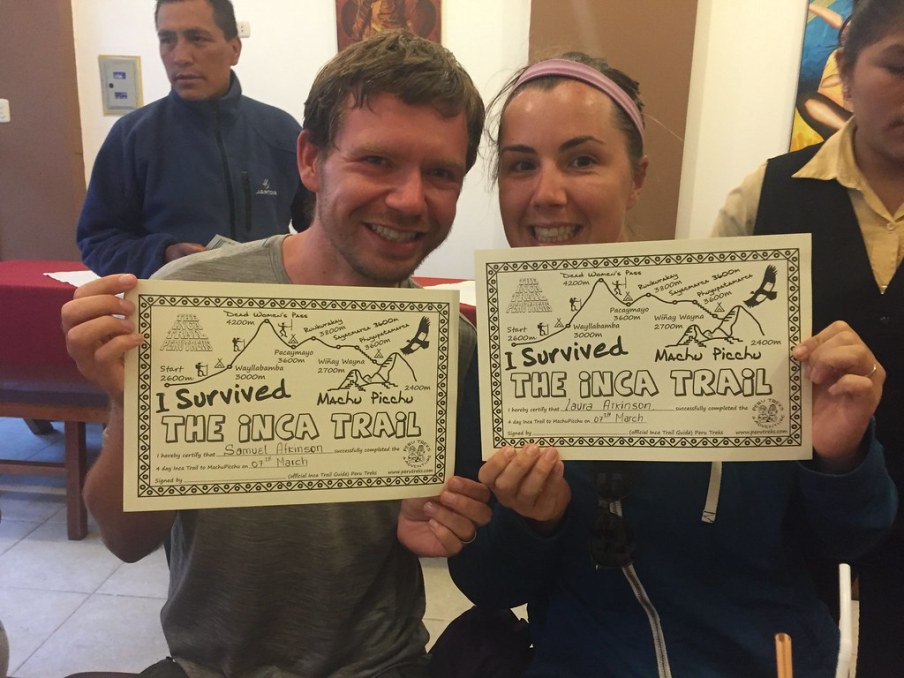