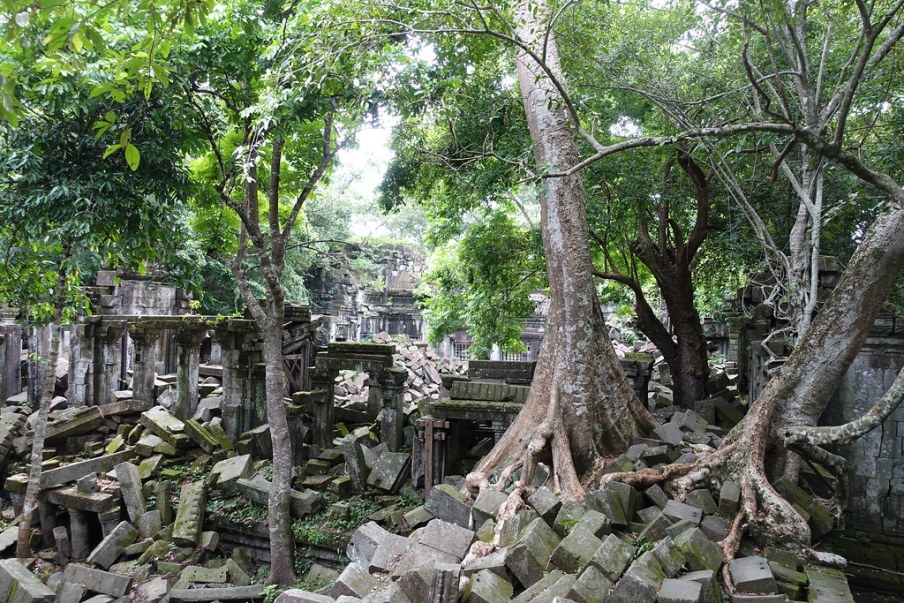 Mission accomplished- somehow we’ve managed 3 days of temples. Although it’s been hard work at times because of the heat and the distances we’ve had to cover, it’s been totally worth it. Yesterday we hired a tuk tuk and went 2 hours northeast of SR to Beng Mealea and Bantaey Srei, also a cheeky last visit to Angkor Wat. 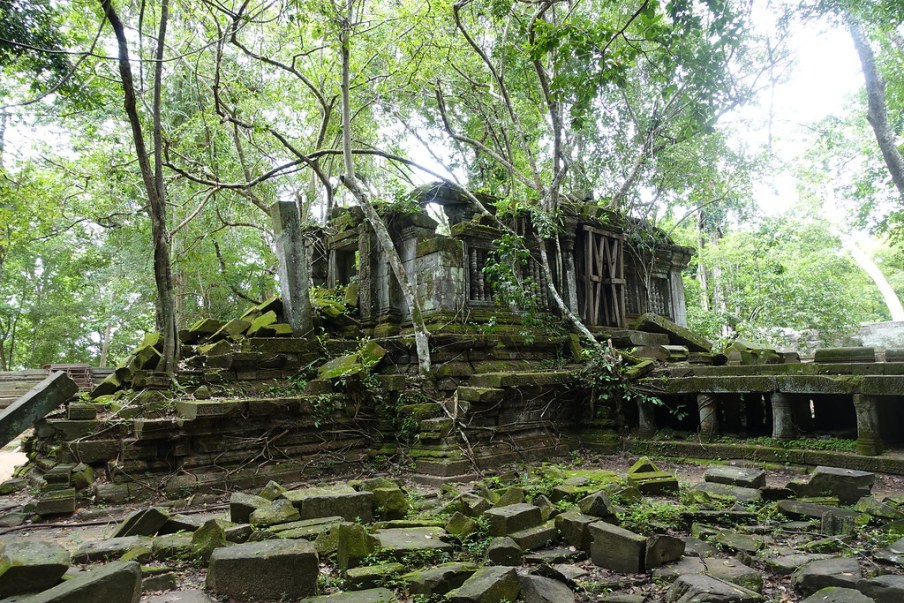 As well as seeing what seems like hundreds of temples, we’ve managed to fit in some awesome eating and drinking too, as well as an anniversary stay at The Shinta Mani Club. This hotel had got to be one of the best we’ve ever been to, if you ever get to come to Siem Reap, do a night here. Amazing. 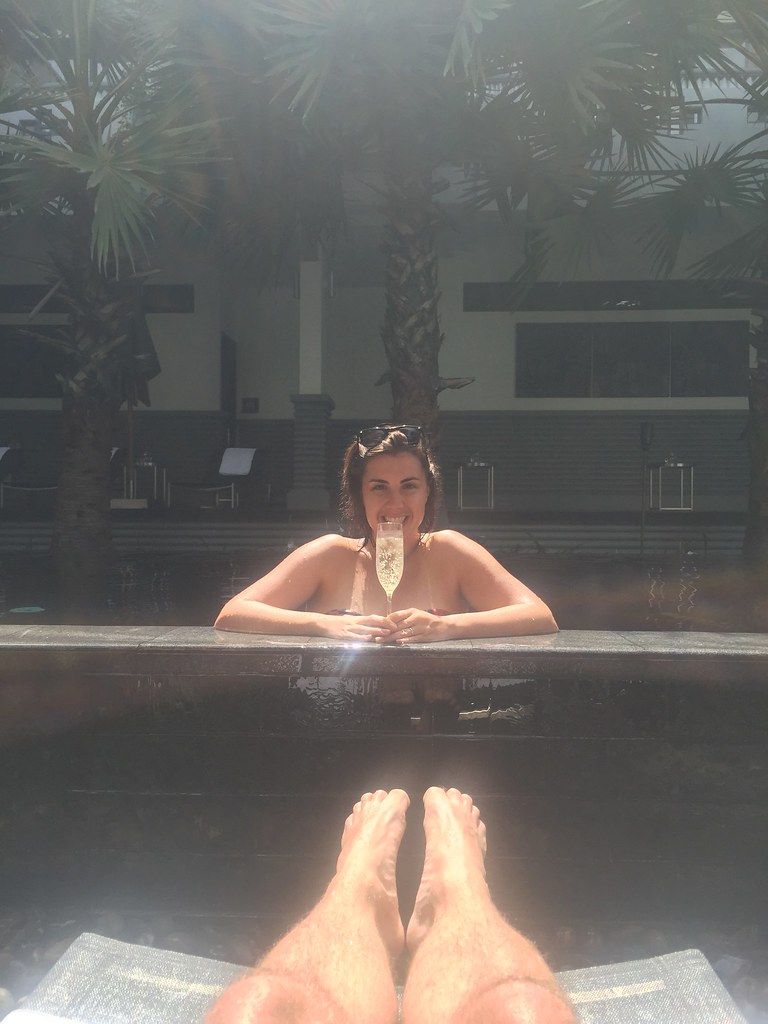 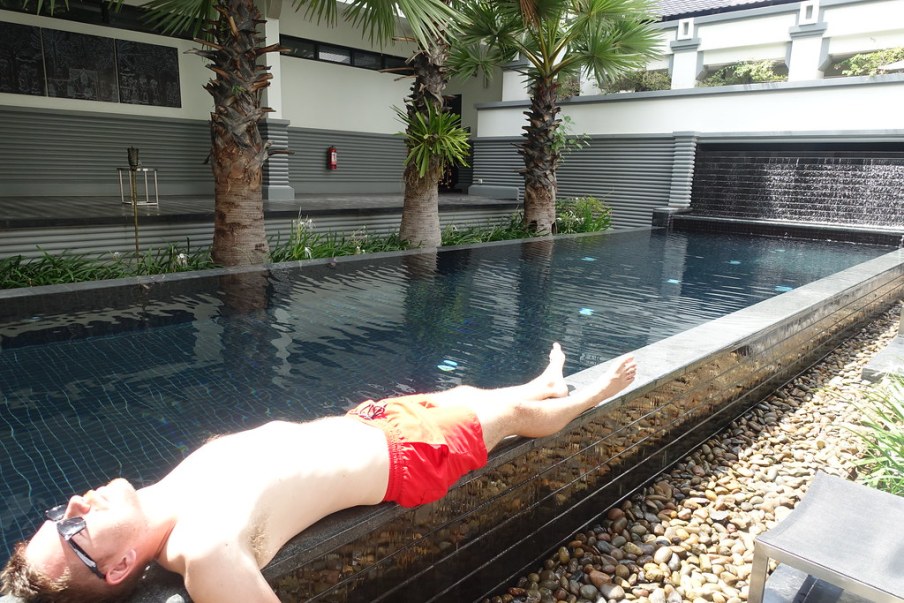 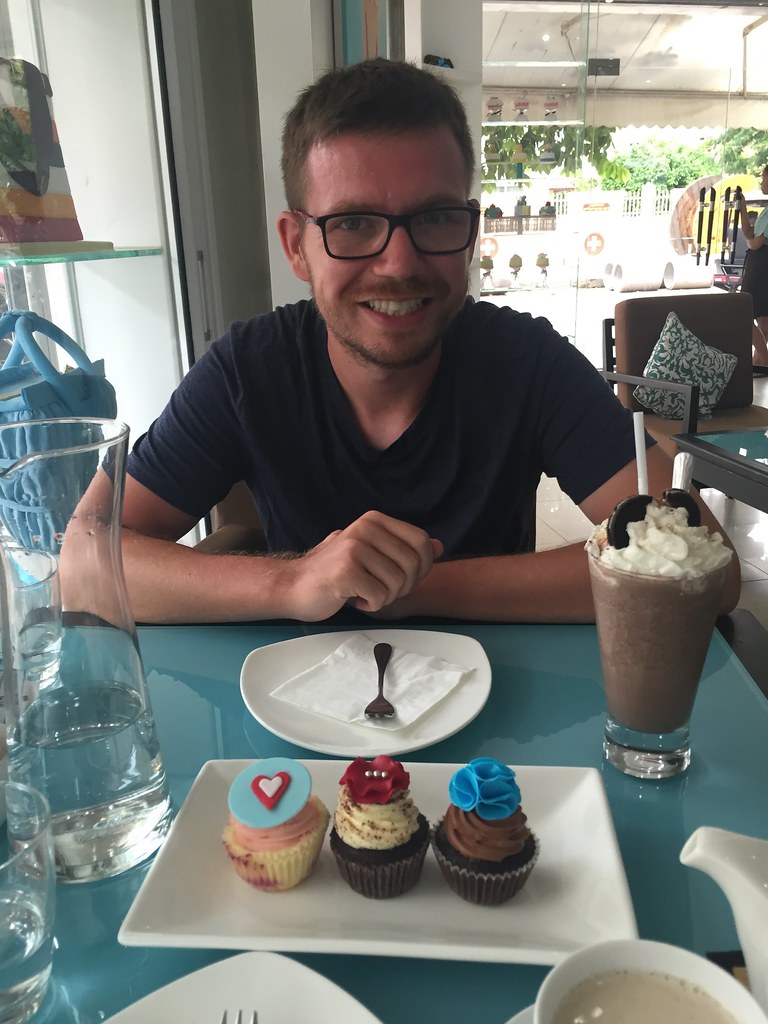 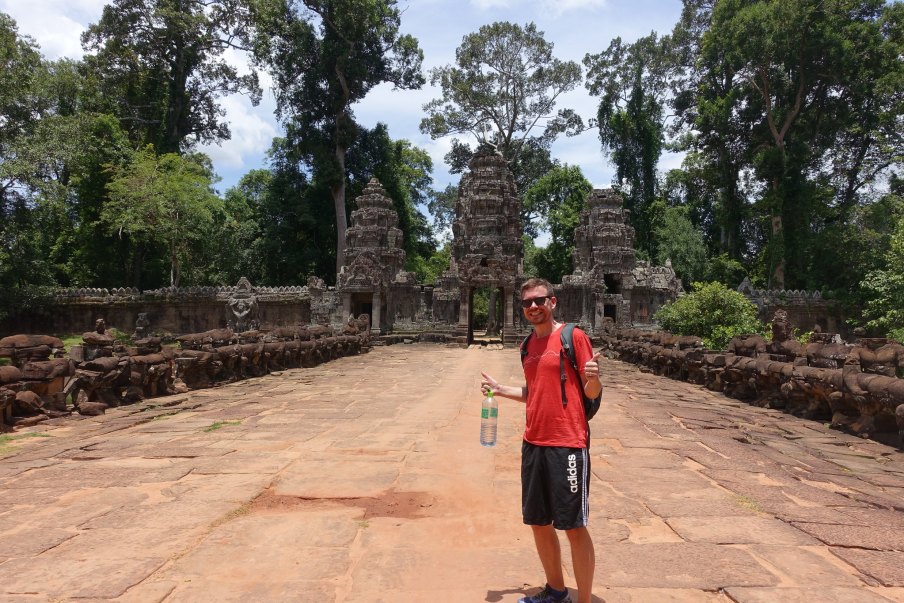 Following our lovely trip to Battambang we’ve headed to Siem Reap, tourist capital of Cambodia and home to the famous temples of Angkor.  Most people who visit Cambodia normally just visit Siem Reap to do the temples and never explore the rest of the country.  As a result the entire city is built up to cater for tourists of all shapes and forms- from streets full of mid-range hotels to backpacker central near the aptly named “Pub street”, high priced boutique hotels and everything in between. This place is built to cope with tons of tourists.

Surprisingly though, there isn’t much to do (other than the temples). There’s plenty of restaurants and bars of varying quality, and plenty of places that will offer draft beer for 50c.  But if you’re not eating or drinking, there doesn’t seem to be much else to do so far!

This hasn’t been an issue for us yet as we’ve been busy doing the Angkor temples.  In the 11th and 12th centuries the kings of that time went on a massive building spree, building temple after temple in the Angkor area.  All the temples have switched between Hindu and Buddhist in that time too. As a result you have a condensed area with absolutely tons of amazing architecture in various states of decline, from fully renovated to taken over by the trees.

The most famous of the temples is Angkor Wat; We made the effort to see it at sunset and sunrise (which meant a 4:30 start!). 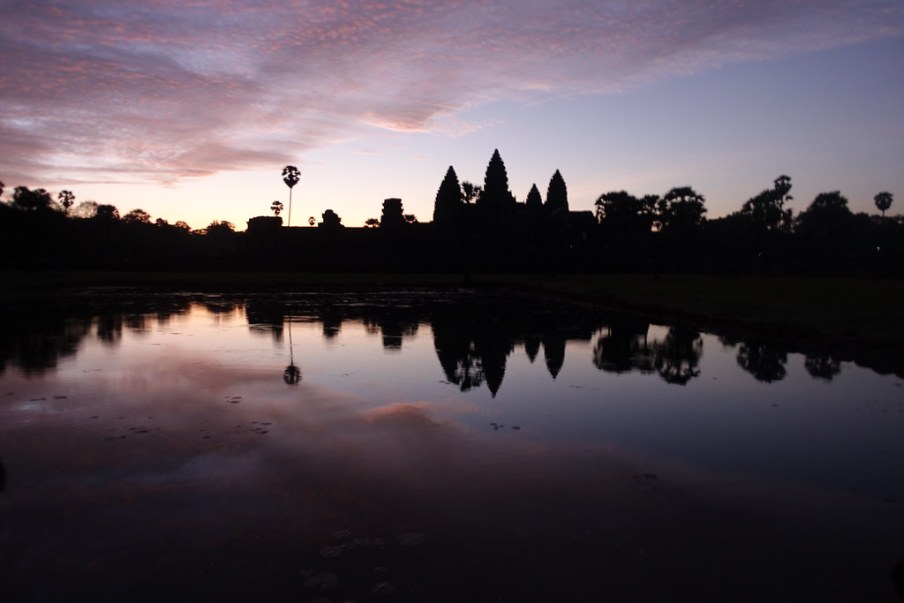 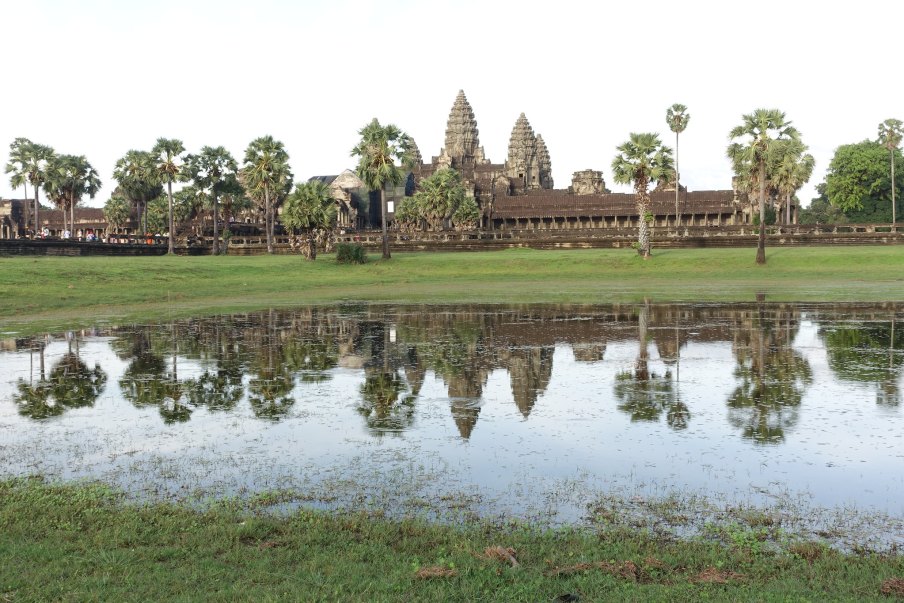 We spent 2 days cycling around the temples; there’s a big loop (37km) and an inner loop (16km) which meant we got very sweaty: temperatures hit the mid thirties which meant we were devouring water at a rate of knots.

There are too many temples to talk about without being overly boring, so I’ll just mention my 2 favourite ones.  Bayon is famous for it’s many faces- decorative stone columns with huge faces carved onto them.  We came here straight after sunrise, about 5:40am, and had the entire temple to ourselves- very rare as it’s one of the most popular temples and normally rammed.

The entire temple is huge.  It’s unfathomable how the ancient Angkorians built such amazing structures without modern technology.  It’s an engineering feat, combined with some incredible decoration.  Both Laura and I agree this is our favourite temple. 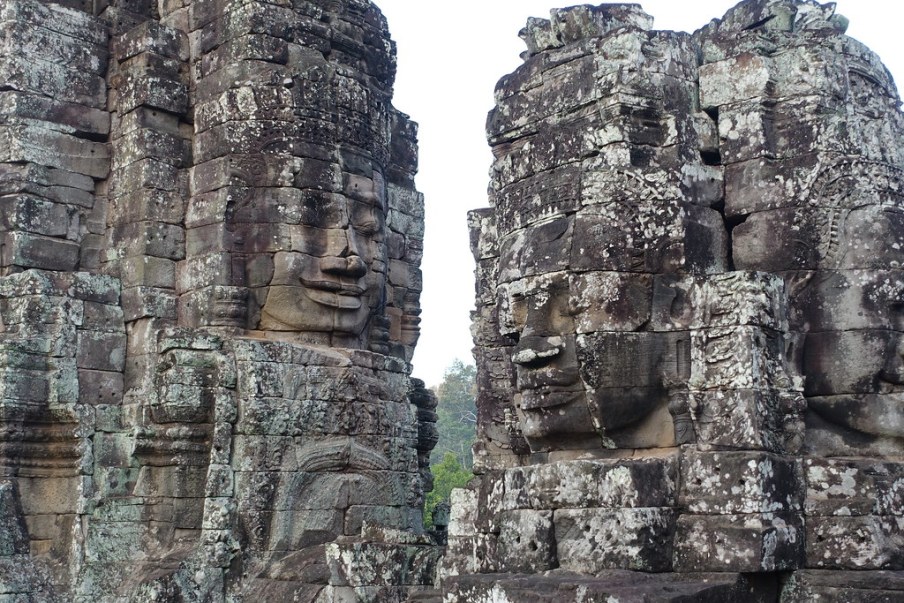 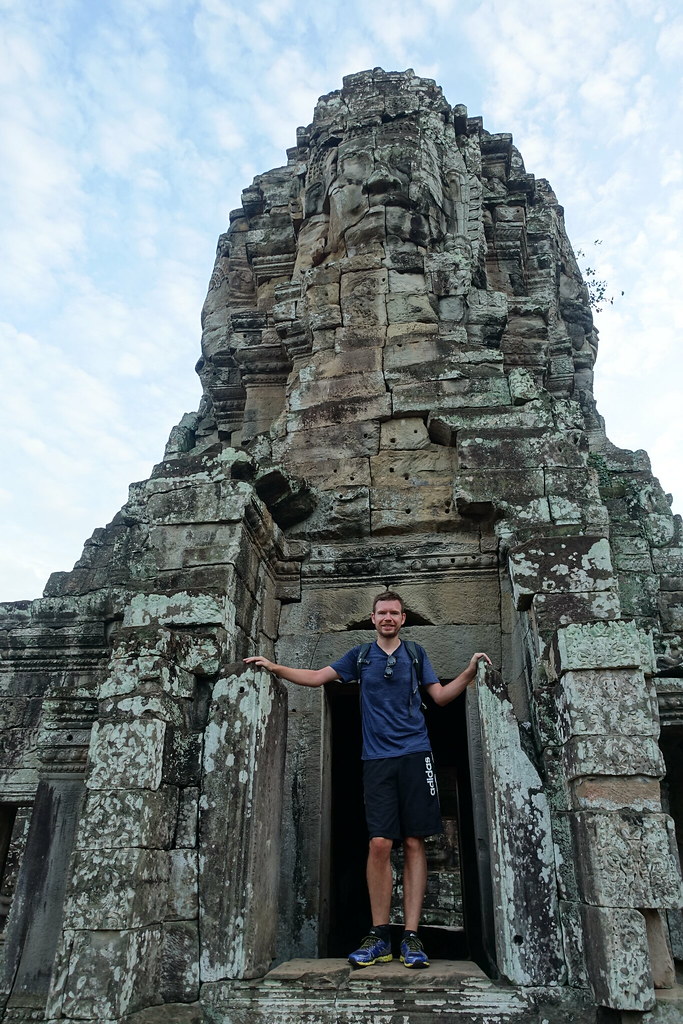 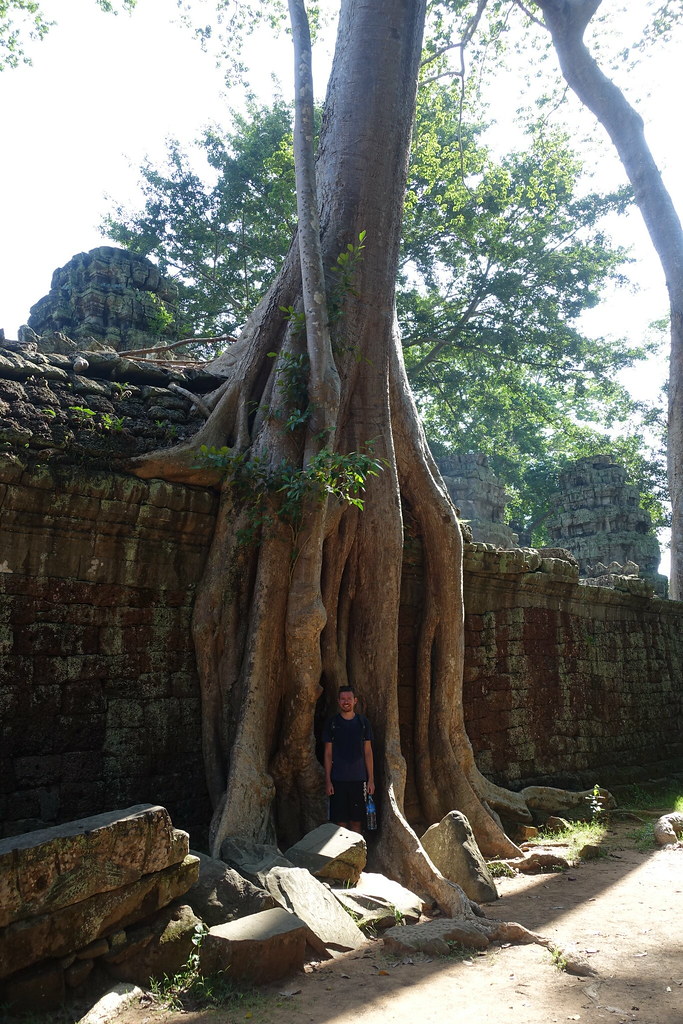 After two days we’re both templed and cycled out.  Fortunately it’s our anniversary, and we’ve checked into a nice hotel with a pool to celebrate and relax.  We’ve still got a day left on our Angkor passes though, so who knows? Maybe we’ll go see even more temples!

Photo of the day: Many faces

Photo of the Day: Where’s Wally? 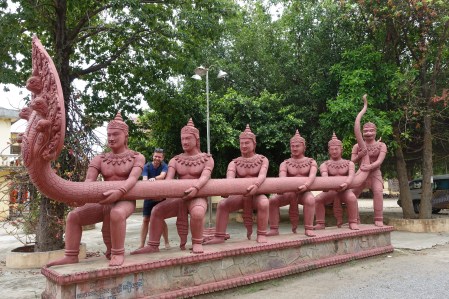 Battambang- worth the detour

So 3 weeks in and we’ve ended up in Battambang, supposedly Cambodia’s 2nd largest city, after Phnom Penh….. so where is everyone? This is such a sleepy place, noone seems to be in a hurry to go anywhere or do anything and there isn’t actually that much to do…..or so Lonely Planet told us….

Another lesson learnt: Don’t believe everything LP tells you.

This is an awesome little place, so much so that we’ve extended our stay by 2 nights. It’s not go go go like PP was, however there is a lot to do, but at a relaxed pace. The architecture is stunning, all French colonial and eclectic. Just taking a walk around here was fascinating. It’s just outside the city that you see really cool stuff  though – we hired some bikes and cycled north where we found a stunning temple. 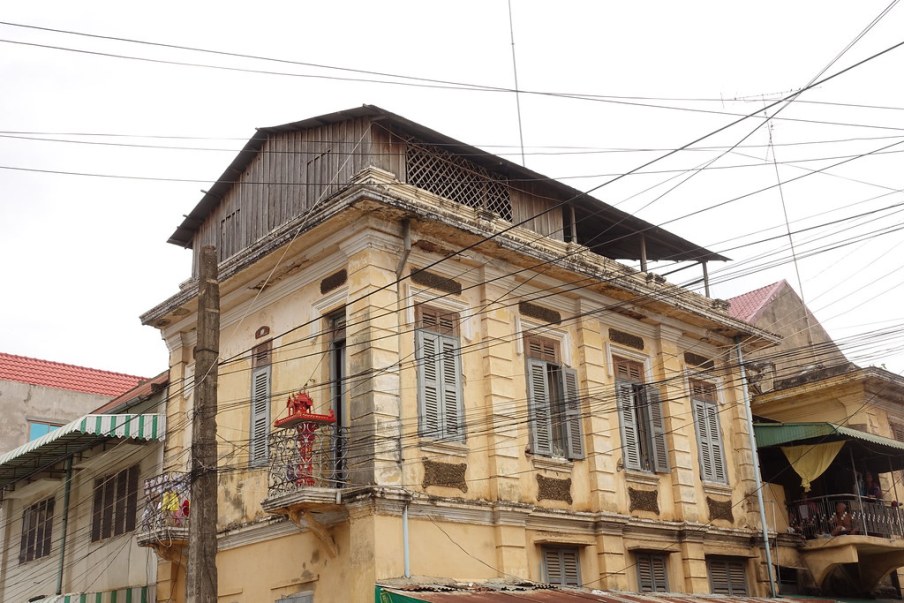 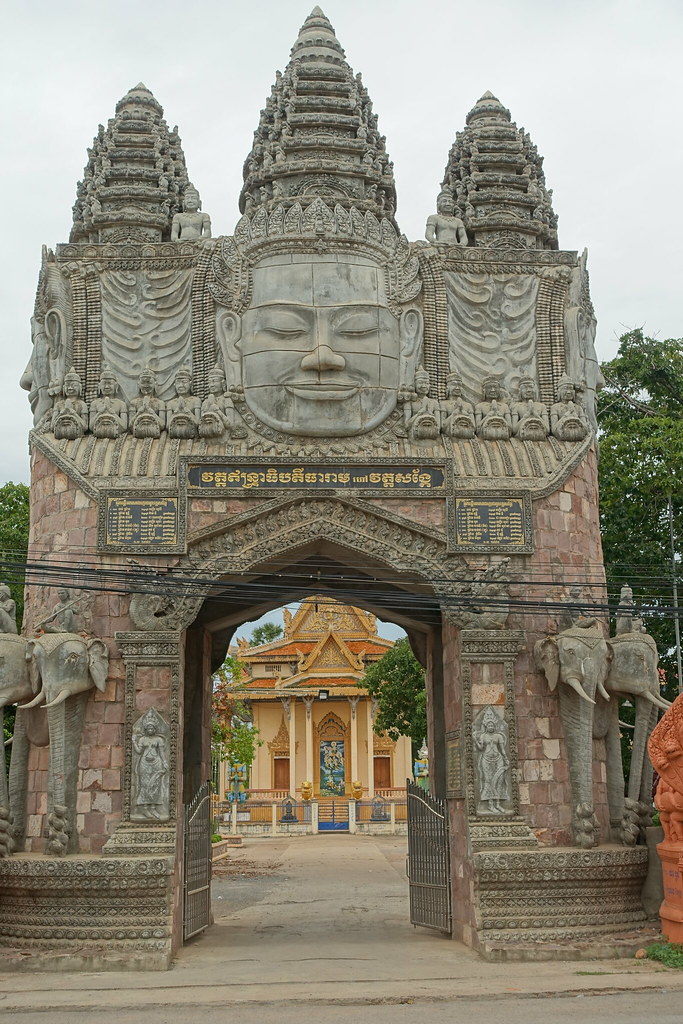 If you’re ever in Battambang, go see the circus- it’s an arts school for teenagers- absolutely incredible. The original circus is in Battambang but when the students graduate they can go onto perform in the professional show in Siem Reap- all the proceeds from the show are invested back into the students education. 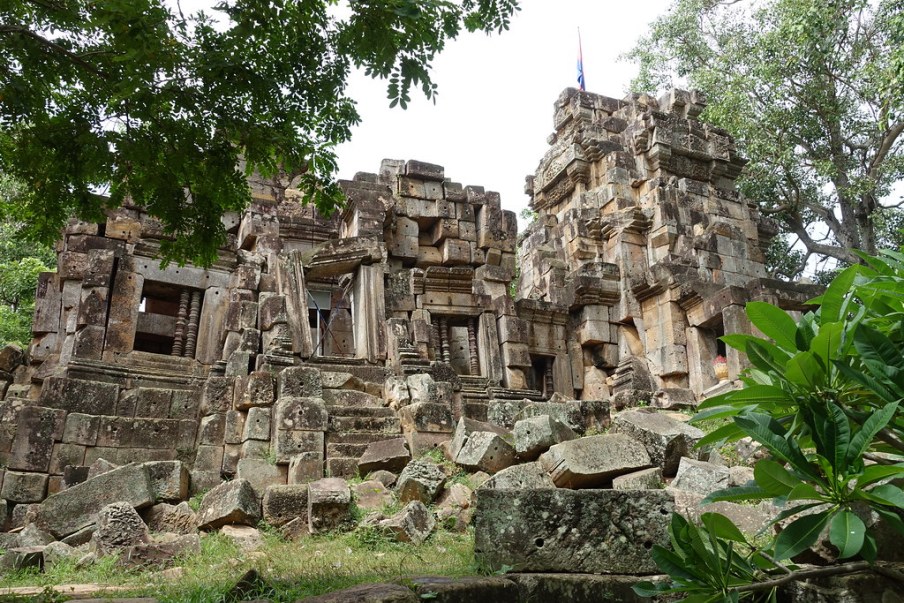 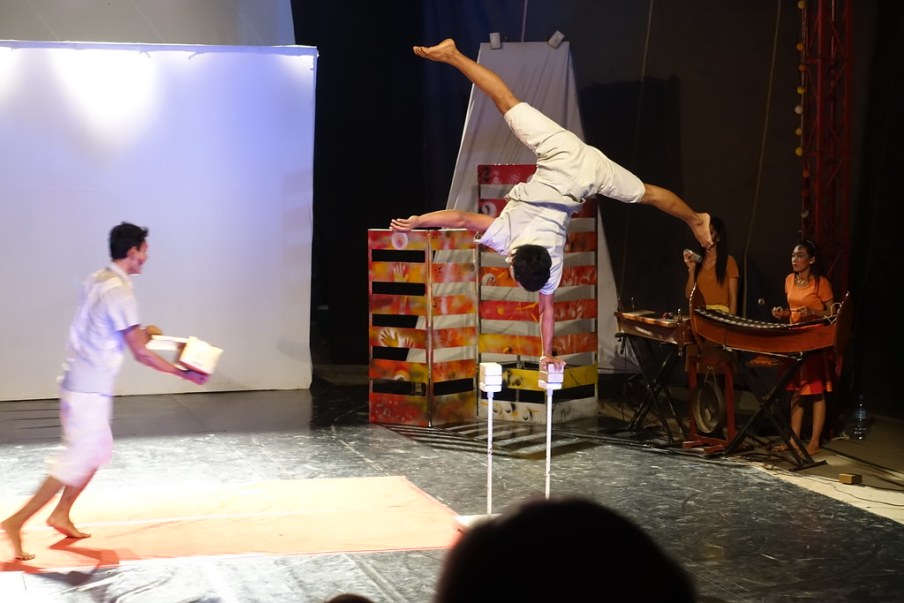 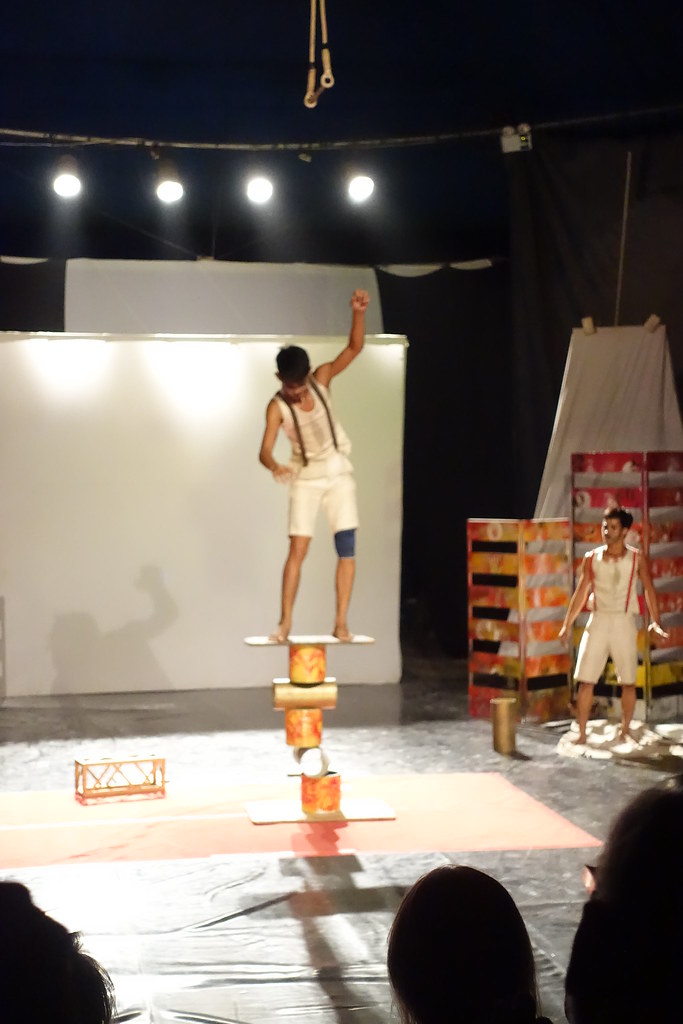 For our last day in BB, we went on another cycle trip, this time heading south to see the Killing caves. A similar situation to that in Phnom Penh,  I’m only just beginning to comprehend the scale and impact of the Khamer Rouge and all of the suffering that people here went through. It’s hard to imagine that almost every family here would have lost at least 1 member to the atrocities. On our way out, we saw the famous bat caves- every night, at dusk, millions of bats leave the cave to fly to Tonle Sap lake to feed. Our camera didn’t do a great job at capturing it, but it was truly amazing. The fly in groups so from a distance it looks like a massive swarm of bees flying towards you! 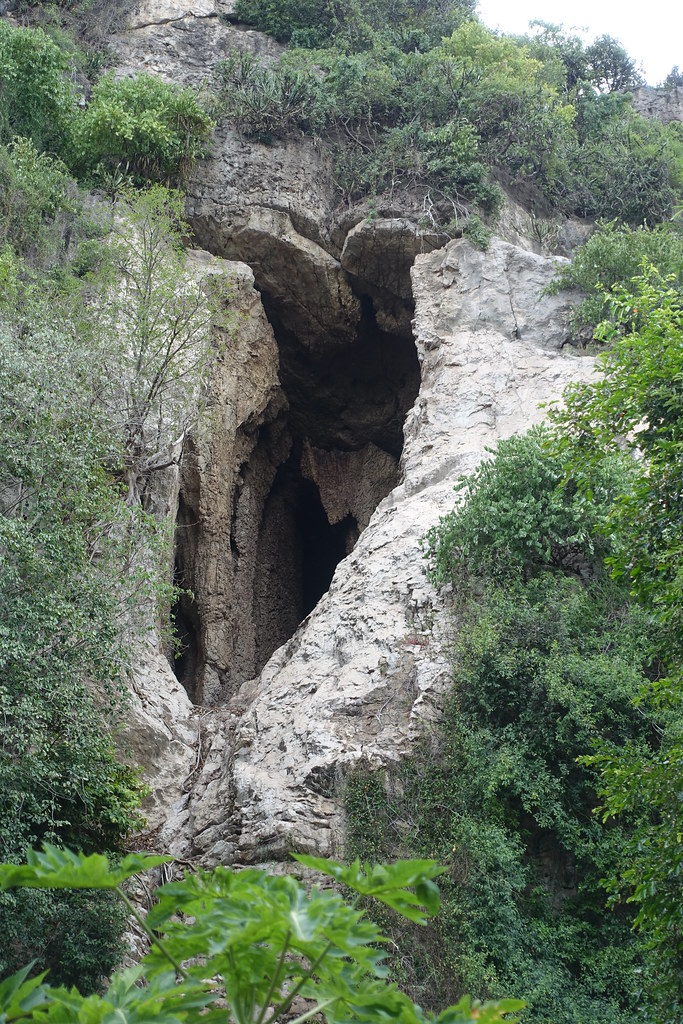 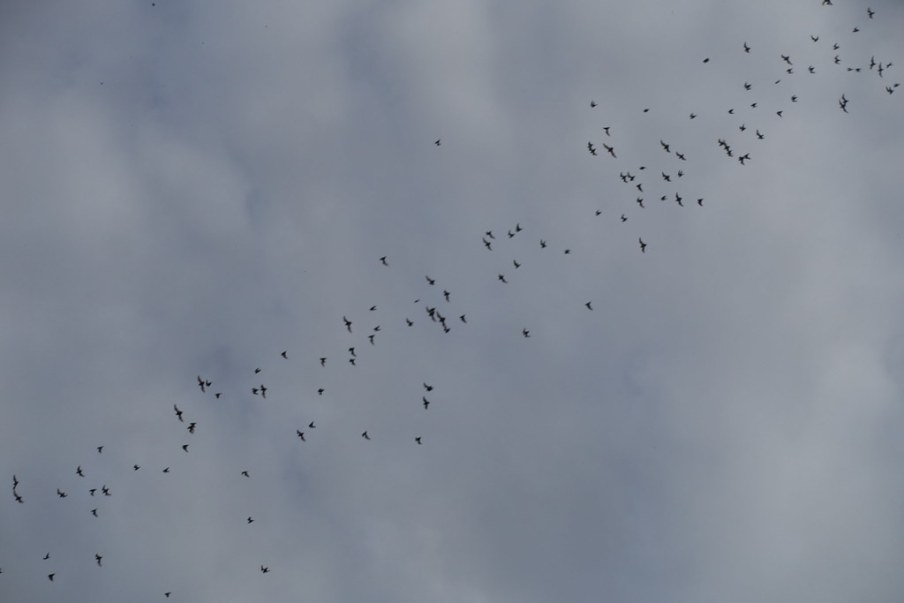 A seemingly massive amount of time is spent whilst travelling figuring out our route; where are we going next, how do we get there, where do we stay?  Information on the internet is impressively sketchy, with sites like wikitravel being particularly poor (yet also useful).

So, to try and help anyone else who stumbles upon this page in the future, here is out trip in detail. Where we stayed, how we got there.  I hope this helps you figure out your way around.

We’re here in June/July. It’s rainy season and it’s low season, which meant a lot of stuff we’ve been able to do last minute as there’s a lot of availability. We’ve booked mostly through hotels.com, because for every 10 nights booked you get 1 night free, and airbnb, because it’s just really awesome for finding unique places and being able to communicate directly with the owners (really helpful when navigating to new places).

If you click here to sign up to airbnb, you can get $25 for free to use on your accommodation.

We turned up at the bus station (Ben Xe Mien Tay) and found the MaLinh ticket booth (far right of the booths, pretty obvious) and booked 2 tickets on the next bus (ours departed at 10am, we arrived at 9:45 and got on fine).  Bus was a sleeper bus despite being daytime and was very cool.  Cost about $5 each.

The guesthouse is a bit of a journey from Vinh Long. Supposedly there is a free shuttle bus provided by Ma Linh to take you anywhere but after an hour and much hand waving nothing materialised.  We took a taxi to the An Binh ferry (about 150k dong), went on the ferry by foot, then we were met by Tong and someone else on the other side who scootered us to the guesthouse on what was quite a nervewracking (but enjoyable journey) along thin paths.

On the reverse leg, we paid to get biked all the way to the bus terminal; this was marginally more expensive (think 150k dong each) but compared to taxi ended up cheaper and much easier.  Would recommend doing it both directions.

Vinh Long to Can Tho

Not sure which bus station this went from as the xe om took us directly in.  The bus clearly said “Vinh Long to Can Tho” on it and was a pay-on-bus affair.  It was quite reasonably priced at a few dollars each.

Nguyen Shack Can Tho (booked via agoda)

Again, a bit out of town. As soon as we stepped off the bus we were jumped on by a xe om driver. With the help of his English speaking friend they figured out where we were heading, and took us for 60,000 dong each.

The manager organised a taxi back for us (a proper, 4 wheel, air con taxi) which dropped us off at the bus station.

Can Tho to Chau Doc

We got our accommodation to book the bus for us, going with the bright orange bus company. Despite being harassed by an old lady who wanted us to go with her cheaper (and less appealing) bus, we just headed straight to the offices, claimed our ticket and waited for the bus to turn up.

Although out of town, it was really easy to get to.  The Chau Doc bus station is out of town, so there is a free transfer minibus.  This took us to the Victoria hotel in town, which then had a free shuttle up to Nui Sam.

There are a number of boat options at different price levels, but they’re all effectively the same (some may offer lunch for a huge added price to the ticket).  We booked through our hotel which was an error as it cost us an extra $9 for nothing.  We went with Hang Chau which, if you book with them, will cost you $25.

They will slightly overcharge you for the Visa for a “handling” charge, but it’s not worth fighting (think we paid $34 each).

The boat leaves from the dock right behind (and slightly to left) of the Victoria riverside hotel.  Even in low season the boat was overbooked; we had to sit out back.  I’m glad we did because we got great views and natural air conditioning, but the wooden seats are hard: we had travel cushions so it wasn’t so bad.  A lot of people were angry about having to sit out back. If you would be one of them, get to the front so it doesn’t happen.  Boat leaves at 7.15.

Photo of the Day: Just chilling out in the pool. 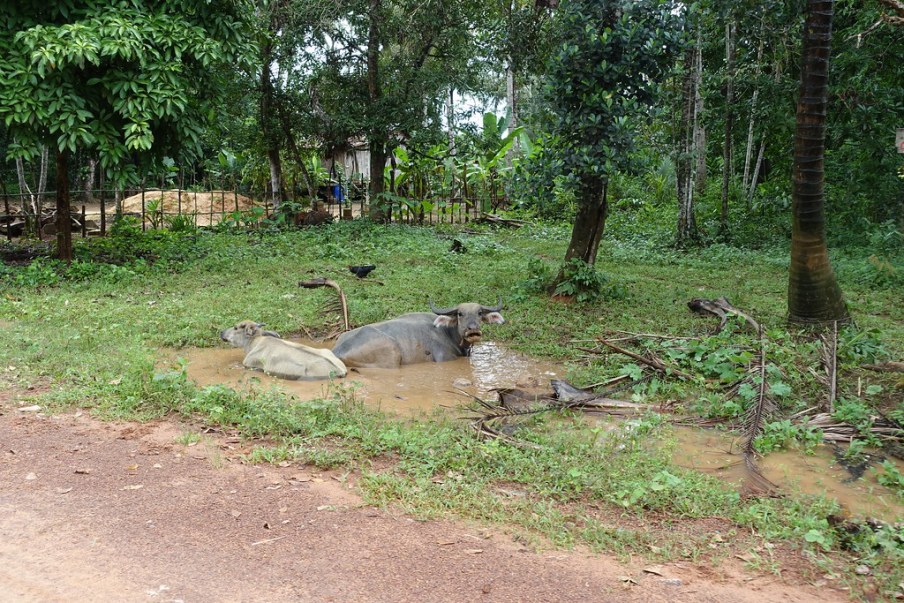