Or specifically, travelling in Fiji is hard.

Having returned to the mainland, we headed to Suva after a night in Nadi (at an overpriced hotel, compounded by the fact we’re really overbudget for this part of the trip).  After trapsing all around the airport to find out where our bus went from and being directed in different directions by whoever we spoke to, we finally got on a perfectly pleasant minibus for our journey to Suva.  This is where our real problems began.

We’d really struggled to find a place to stay beforehand. Everywhere was either super pricey, catering to the weekday business crowd, or it was cheapish but terrible. We’ve never seen a place with such a divide; there was nothing mid range, and all the backpacker hotels had reviews in big capital letters saying things like “DO NOT STAY HERE” and “TERRIBLE STAY AWAY”.  We’d found 1 place that looked ok, but there was no web booking and we were waiting for a message back.  That message never came, and so on the bus we had to make a decision, and ended up going for the Novotel.  It was pricier than we wanted, but by far the cheapest of the brand hotels as they had a weekend special on, and it was a bit out of town.  Fortunately we’d read in the reviews they had a free shuttle into town.

Except that doesn’t run on weekends, and it was a Sunday.

And it turns out that pretty much everything shuts down on a Sunday in Suva.

We got a taxi in and had a wander around anyway. It’s a lovely little colonial town, with great architecture.  We even managed to find somewhere for a spot of lunch.  But all in all, there wasn’t really much there at all. There was a great highlight for me though as we got the bus back up to the hotel. All the buses are retro things that look like they’re about 50 year olds and all have classic paint jobs.  Really really cool. 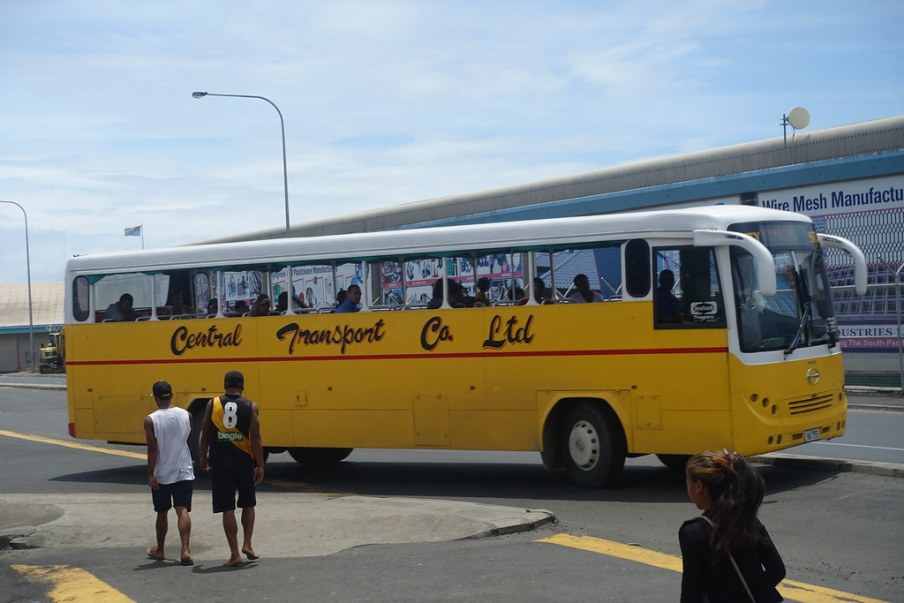 Then came our next battle.  We knew the next day we wanted to go to Savusavu, one of the bigger town on the second biggest island in Fiji, Vanau Levu. We knew there were boats available, so assumed we’d be able to get a ticket when we were here to head over.  Except it turns out that the ferry companies have almost zero information online. After a whole bunch of phone calls (did we mention that Fiji shuts down on Sunday) mostly on Monday morning we managed to discover that;

a) 1 Ferry company wasn’t running because of the cyclone

b) 1 Ferry company was running, but it was a 12 hour boat overnight, and we’d probably have to sleep in plastic chairs.  And knowing our luck, it’d probably get cancelled anyway

So we had no choice but to fly or go somewhere else. Only all the direct flights were sold out.  So, instead we flew from Suva to Nadi (you know, where we got the bus from in the first place) and then Nadi to Savusavu.  What a faff! And a lot more money we don’t have. But we got here at last.

We also found we had the same issue here with accommodation. We struggled to find anything that was cheap but not terrible. We eventually stumbled upon one hotel which managed to fit us into a basement type room with a fan.  Not great, but certainly within budget, and the next day they moved us (with some prompting) into a nicer room with a spectacular view. The view is pretty much the only thing the hotel has going for it though. The breakfast is terrible; I don’t mind for what we’re paying, but there are others staying here paying over 100 quid a night only to come down to breakfast to discover they’ve run out of bread and hot water for tea!

Griping aside, Savusavu is a lovely but weird town. We’re seeing a lot of westerners, and they don’t seem to be tourists but locals. A lot of them seem to hang around the yacht club (not as posh as it sounds) drinking from 11am.  And we have no idea what they’re doing here, as theres no real business to speak of. The towns just 1 road of shops, a market and a bus station.  Very strange! 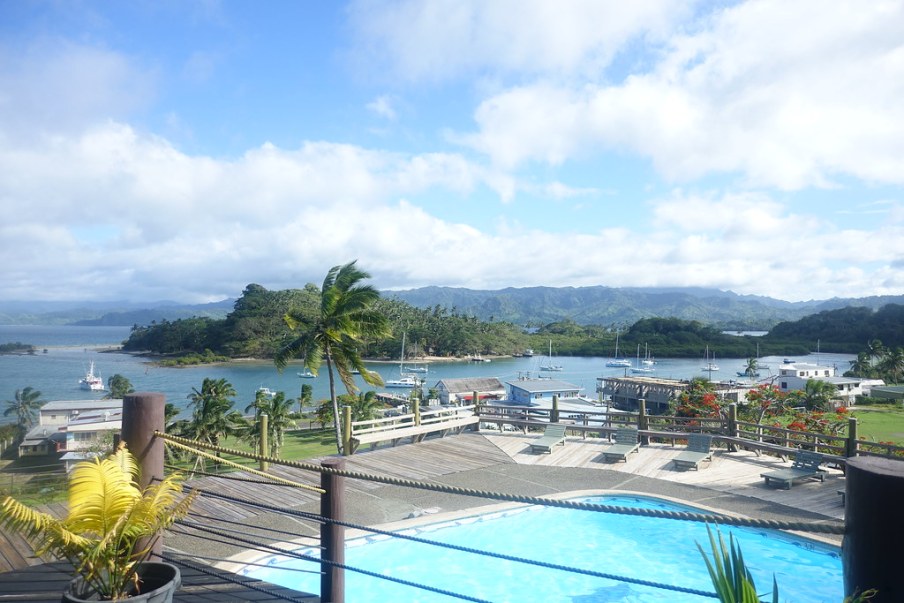 Still it’s a beautiful place with lush green forest at every turn, and the weather has now turned around to being mighty hot and humid. The lack of hot water in the shower is truly not a problem.  The major problem we’re finding now is it’s so hard to go anywhere or do anything. We’re so used to SE Asia and NZ where each day we can decide what we’re doing and get there via a bus or walk, but in Fiji everything requires incredible research skills and planning. When we pointed at a few of the things from the top 10 things to do on trip advisor for the area our receptionist didn’t have a clue.  It turns out that the big resorts here all have their own tour guides who sort this, and to go solo is basically unheard of.  Fortunately we managed to find an amazing tour guide to go for an island adventure tour!

The day started out with a trip to one of the inland villages. We could go no further until handing over an offering of Cava root (used to make the drink Cava, the national drink of Fiji. Not intoxicating, just makes your tongue numb) to the village Chief.  I know the image you’re imagining, of someone in chiefly tribal robes and a formal ceremony.  That’s what we thought. Not a chance! The chief was a fellow called Tom, wearing dirty shorts and t-shirt who we interrupted during his hedge trimming.  Laura thinks he might have been high.  Either way, we sat on a mat and some Fijian was spoken, and we were “formally” allowed into the village. Hoorah! 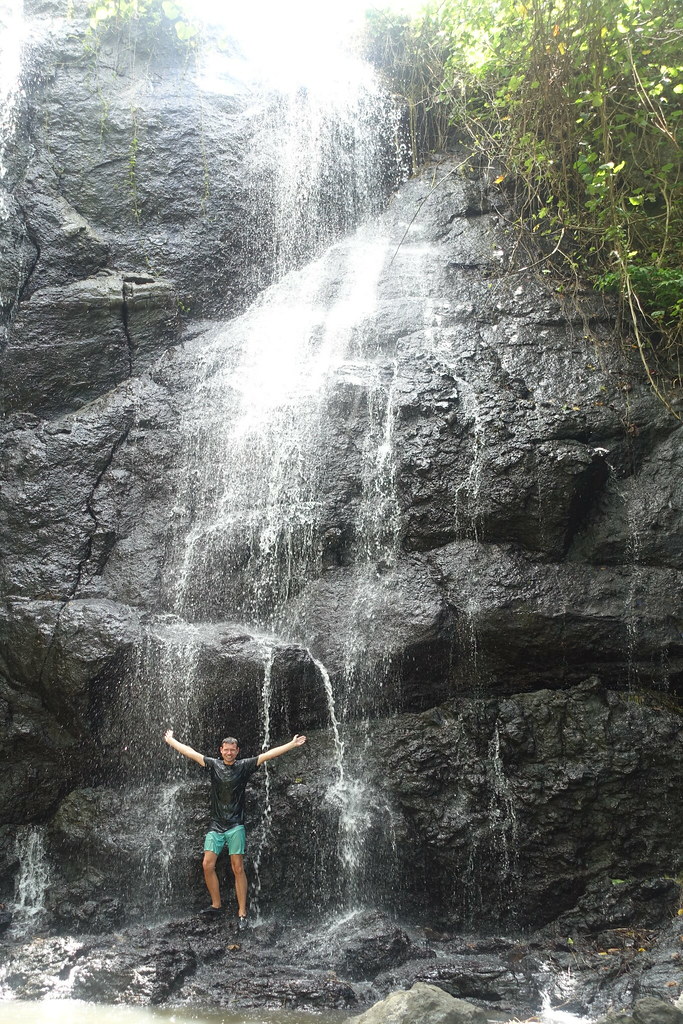 Things picked up from there as one of the tour guides took us to some private land he and his wife own.  A small hike later (they normally make it a long hike, but it was too hot) we arrived at a private waterfall.  As you can see from the pictures it was really beautiful, although some over friendly fish were jumping out the water to try and nibble me (harmless but surprising). 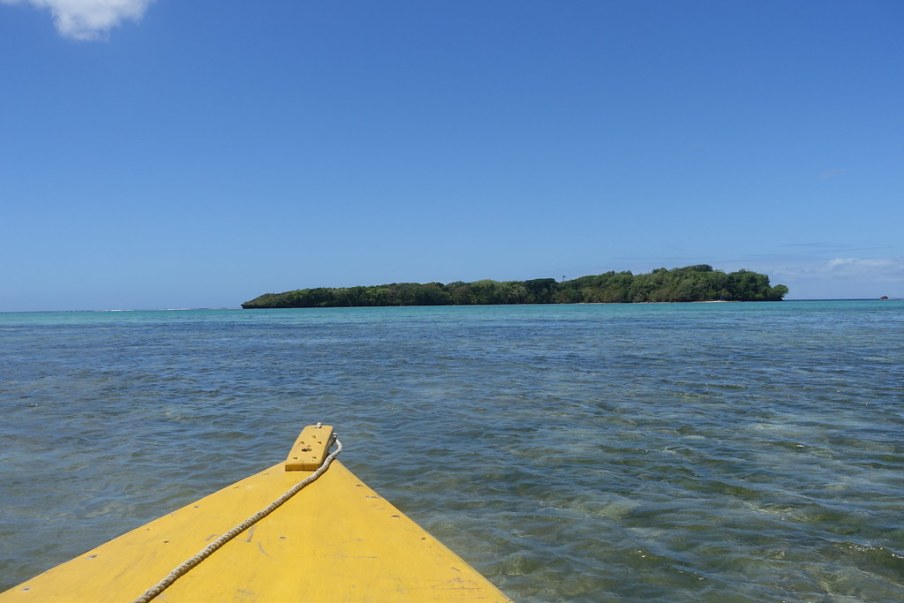 From there we then headed back to the guides’ house to jump in a boat over to a private island belonging to the village. No one on it except us, the guides and the other 5 people on the tour!  We got to go on a big snorkel to see some beautiful coral, although the tide was a bit strong in places for our liking. We’re regretting not buying a Gopro so we could show you what the snorkelling is like.  After that we were treated to a massive lovo dinner (a style of cooking where the meat is buried underground) and a walk around the island to see the Bat tree (literally a tree full of hundreds of massive bats. Quite a sight to behold and hear.)  After the hermit crab race (they collect a hermit crab for everyone, put it in the center of a big circle and the winner is the first to the edge) in which I one the first round and Laura won the last we then had time for another paddle before being shepherded back to the hotel.  It was a wonderful day and something that would have been impossible without the tour guide. 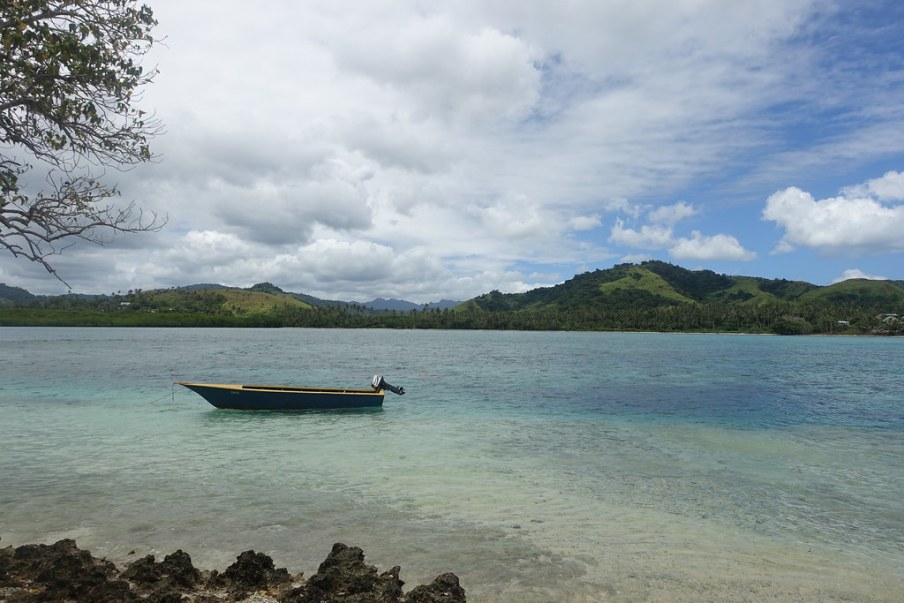 Today has been a chill day; partly because we couldn’t find anything to do without costing a fortune, and partly because we needed to do some planning to try and get the rest of the trip running smoothly. We’ve booked our next accommodation (an island about 5 hours down the road via bus and boat called Taveuni) and we know how we’re getting there and where to buy the ticket. We’ve also booked our first accommodation in Chile and know our plans for the first two weeks.  So, we’re getting more organised which is nice.  From tomorrow we’re moving to a nicer hotel (yay!) because we managed to get a really cheap accommodation/diving deal for 5 nights stay and 3×2 tank dives.  Very exciting! 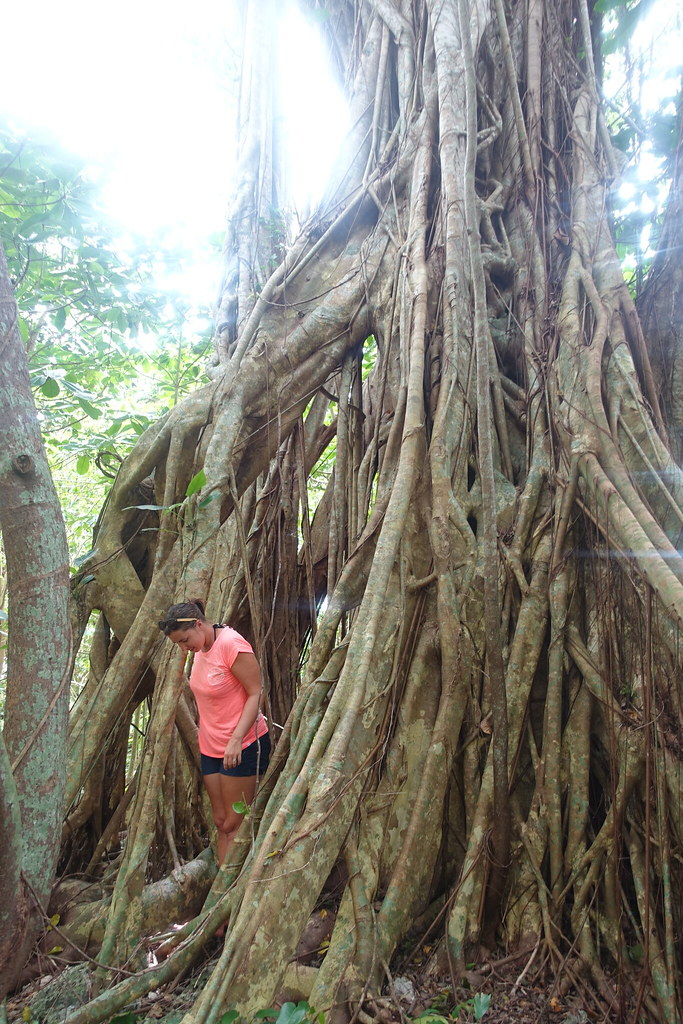