The wet and windy west.

If I had to use two words to describe the west coast, I would have to say: wet. windy.

We (reluctantly) left Marlborough and drove to Golden Bay, which was actually quite strange- there’s only one very windy road around a mountain in and out so you feel very isolated. Then you arrive in Tanaka, which felt like a hippie colony- good coffee though. We drove to the Farewell Spit, the most northern point on the south island. Very beautiful and cute seals on the beaches but it was SO windy. The photo doesn’t really do it justice:

From here, we headed down the west coast to a teeny tiny village called Punakaiki, stopping at a few campsites along the way. There’s not a lot to do in places like this, apart from hiking and the scenery was so pretty that I don’t think Sam minded too much (especially with the promise of hot chocolate and marshmallows at the end of it!) We’ve gotten into the habit of stopping for coffee or hot choc everyday- so much so that Sam has created a separate category in our budget app. I don’t want to know how much we’ve spent on it so far- definitely more on coffee than on booze!

We’ve now reached the awesome glaciers- Franz Josef and Fox. WOW. Although the weather hasn’t been great and so we haven’t been able to get as close to them as we’d like, they’re still hugely impressive. Fun fact for you- the glaciers are retreating due to global warming and so the DOC needs to constantly change the access points for the public. The only way to get onto the glacier is by guided hike via  a helicopter. We looked into it but it was going to be more expensive than skydiving- Sam put his foot down firmly on this one. 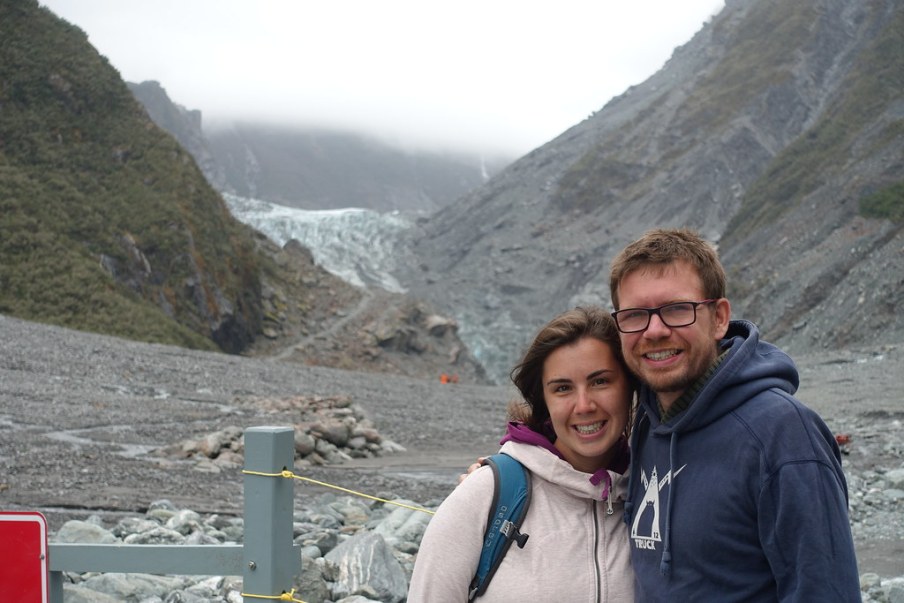 Low cloud cover- but this is a glacier, honest.

Man flu has struck Vanatar this week- Sam has been ill, which has been SO FUN for me! No, it’s actually been ok, although patience has been wearing thin for both of us! He’s rallied though and come on hikes with me everyday even though he’s felt rubbish- massive husband points for him.

The west coast is notorious for its rainfall and this proved no exception yesterday- 24 hours of solid heavy rain. Seriously heavy rain. To the point where pretty much leaving Vanatar to go to the toilets resulted in needing to change clothes. It’s really interesting in how different countries deal with wet weather- in HK, it would’ve been declared black rain, everything would have come to a standstill (school would’ve been cancelled for sure.) In London, buses would’ve been gridlocked, tubes with massive delays. In NZ, everyone just deals with it- normal life goes on.

Tomorrow, we’re heading in land to the Central Otago region- more wineries, woohoo! Next week we’re also planning to do another great walk- weather dependant. Sam’s counting down the minutes.