It seems like such a long time since the nightmare of Suva and the very expensive internal flights we had to take. After a couple of days in a not-so-great- hotel in Savusavu, we moved to ‘Naveria Heights Lodge,’ a beatufiul hilltop lodge, where, for 4 out of our 5 nights there, we were the only guests (which was awesome.) This place would usually be so far out of our normal budget, but Sam found a stay and dive deal on their website- 5 nights and 3 days of double dives. No brainer. 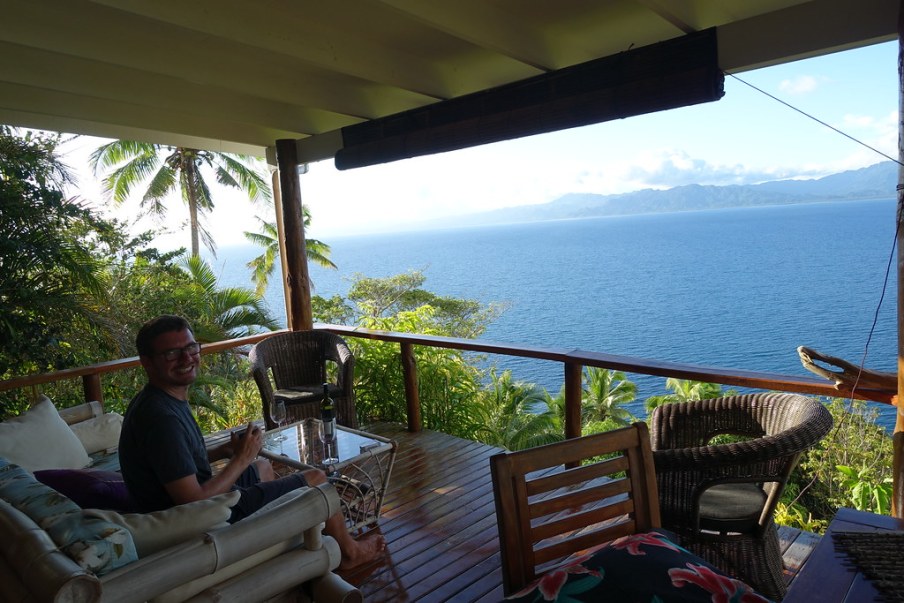 View from the lodge

To reach the lodge we had to endure a gruelling 20 minute vertical hike up the hill, usually in temperatures of 32-34 (well, either that or pay $10 for pick up. No thanks!)  It did mean we did a serious amount of exercise over the 5 days though, together with some exhausting dives. 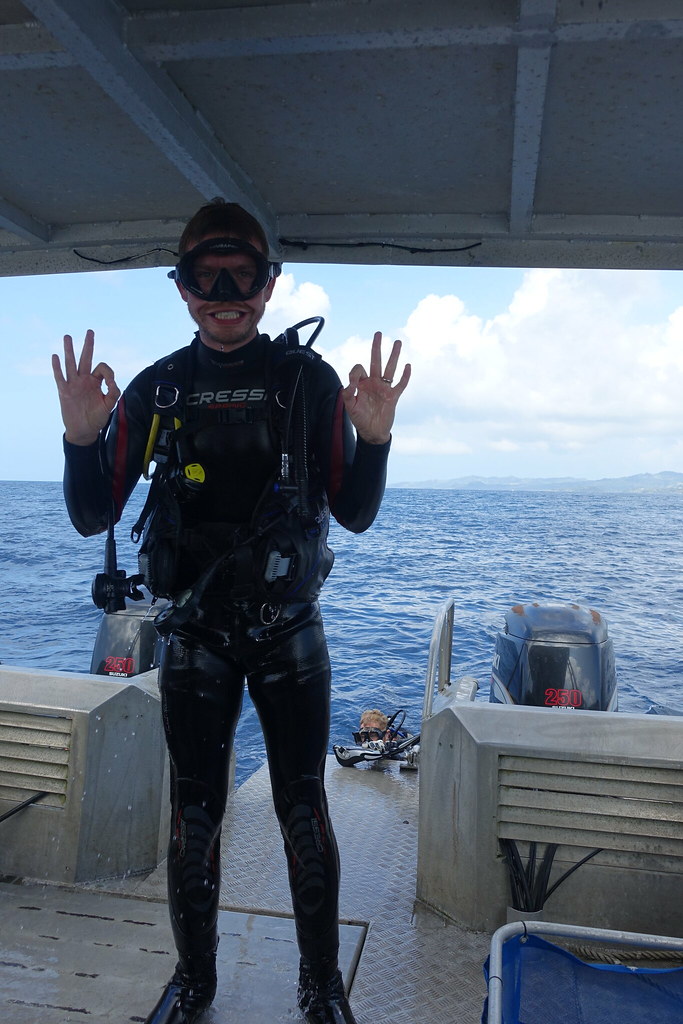 Sam straight after up close and personal encounters with giant turtles

We dived with ‘KoroSun Dive’ and they were amazing. I can’t quite figure out how to put our experiences there into words, but I’ll give it a good go. Depending on the amount of air you have in your tank, you can be down for anywhere from 35-55 minutes. There were only a few other divers with us on each day and the owners dived with us, as well as giving us loads of tasty snacks and info on what we would probably see. All of the dives we did were amazing, so much better than in the Yasawa Islands, but it was on day 2 when we came across a whole school of Scalloped Hammerhead sharks- there were about 80 of them swimming all around us for about 15 minutes- a truly breathtaking experience that we’ll both never forget. They were curious about us and swam right past us, looking straight at us. We saw giant turtles, whole schools of barracuda, giant tuna and groupas, as well as incredible reefs. We don’t have a Gopro but to give you a visual, here’s a photo of the Hammerhead site we visited that others took: 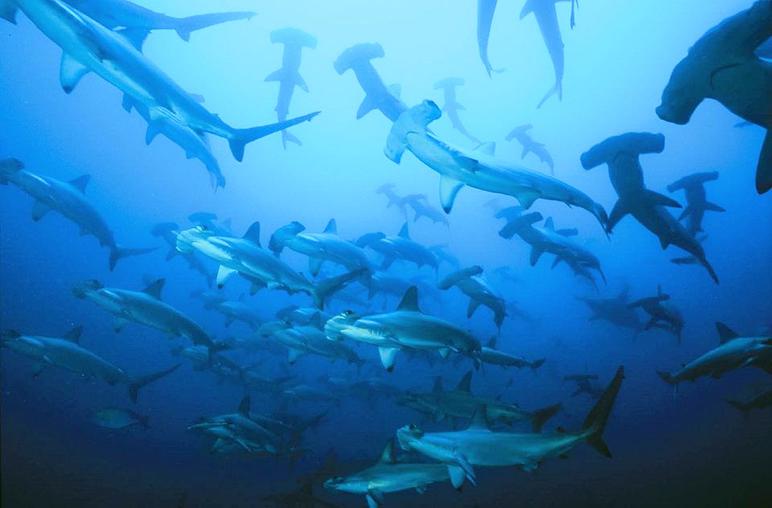 After 5 relaxing days at Naveria, we took a very early morning bus and ferry to Taveuni island, aka The Garden Isle. This place is seriously stunning- green everywhere, incredible scenery and home to the world famous Rainbow Reef (famous for its soft coral.) After saying we were definitely not doing any more diving, because it works out at about 90 quid per double dive for each of us, we immediately signed up for a double dive over Rainbow Reef. Why not?! This might tell you why (this is the top of the reef in Rainbow passage, one of our dive sites:)

It was a complete sensory overload- everywhere we looked there were more amazing things to see. The reef is huge, with a strong current running through it (this attracts a huge variety of sealife as the current brings food along with it) and around 20 dive sites. It was hard to orientate ourselves during the first dive because we literally had no control of where we were going- the current just pulled us along, even when we were trying to swim into it. On our second dive though, we could drift along and stop to watch everything on the reef. There were giant turtles, white tip and grey tip reef sharks, beautiful coral, hundreds of variety of fish, giant eels and sea snakes- the list goes on! We feel really spoilt to have seen so much underwater- today we were talking to a girl on the bus who had dived the Hammerhead site in Savusavu twice and seen nothing. That would have been so disappointing, especially if you’re only diving for 1 or 2 days.

We’ve now definitely finished our Fiji diving (although I was trying to get Sam to agree to another day of it) On Thursday, we took a local bus to Tavoro Waterfalls, which were incredible! We hiked around an hour to the bottom of the second waterfall and swam for ages. So lovely and so quiet, there was hardlys anyone else there. 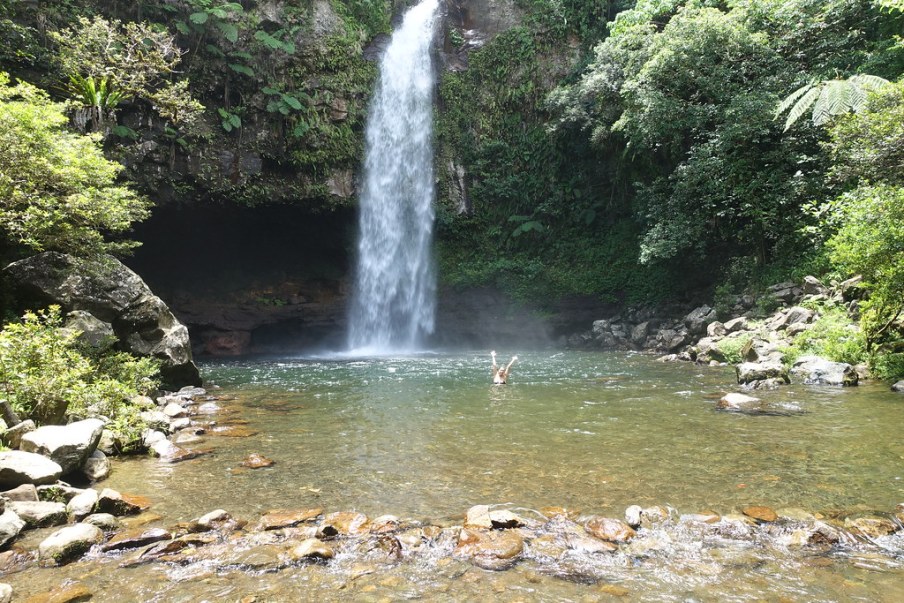 On Friday it was another early start as we took a bus to Lavena, to do the coastal walk. Again, stunning waterfalls we could swim under and a lovely walk, but there were hundreds of flies and it kind of ruined the walk for us a little.

It was then back to Nadi, after taking a 2 hr ferry, 4 hr bus, 2 taxis, a 40 minute flight and a long, hot wait in Labasa airport.  Today we flew back to NZ for one night only with my awesome friend Nicola and then tomorrow it’s onwards to Chile, yippee!

Note: We were feeling super relaxed until we landed in Auckland and got ready to get off the plane, only to be told that the plane had parked 5 ft short of the target line so the walkway couldn’t reach the plane. After 20 minutes of waiting, we were all told to sit back down, buckle up, bags away and then we were towed forward the required 5 ft. So from landing to getting off the plane, it was about an hour. I’m fairly sure that parking in the right place is a perquisite for a pilot.