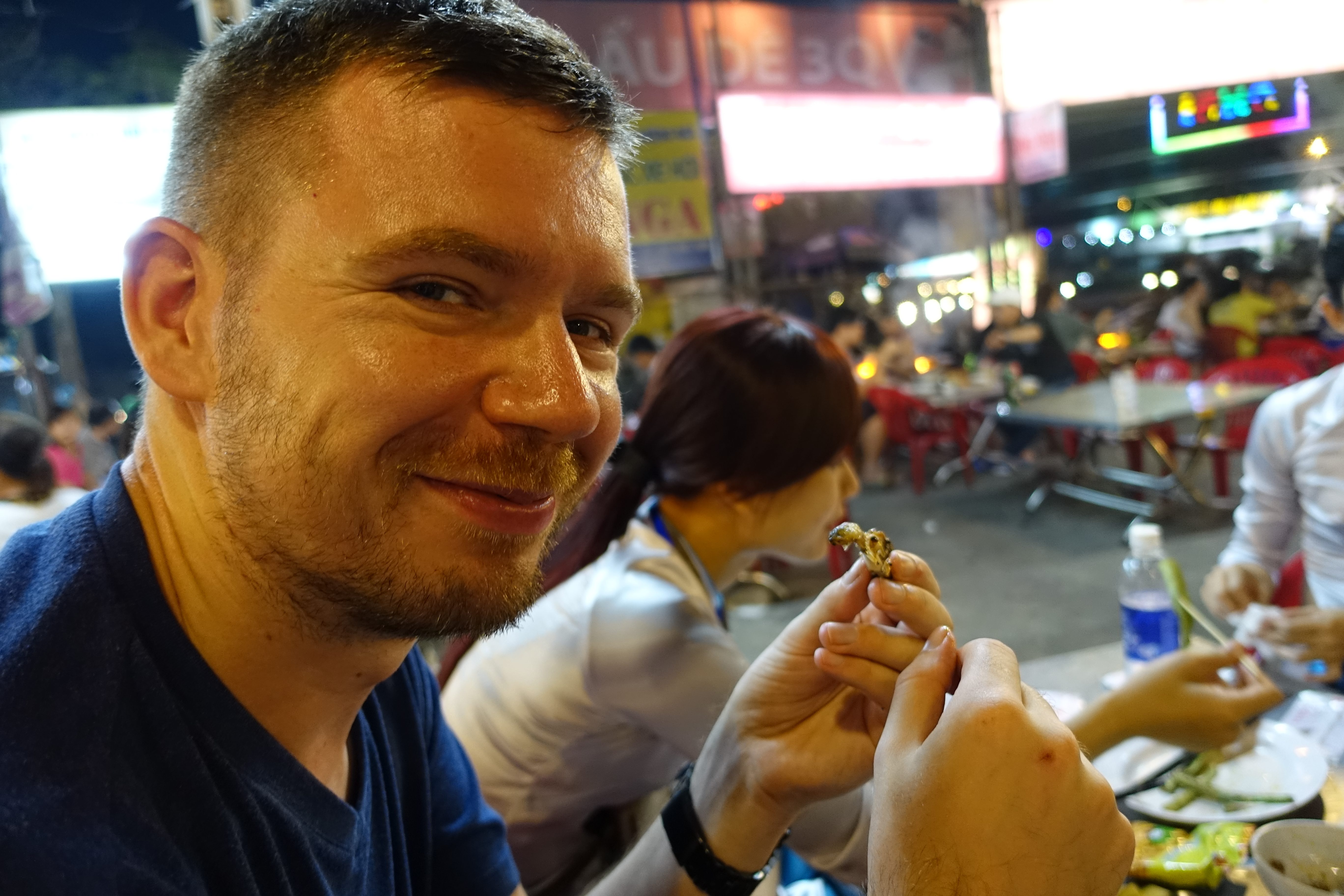 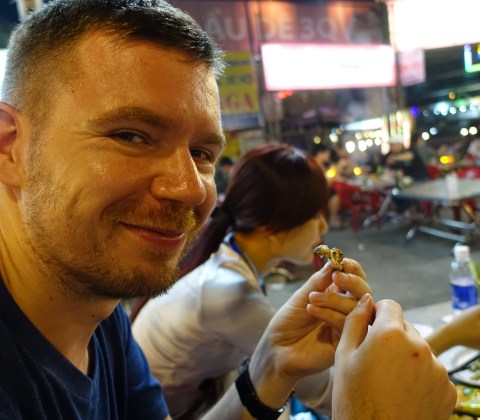 One Week into the adventure

It’s insane that we’ve only been gone a week. Already feels much longer (which is no bad thing). Our first week of travelling has been split into two distinct sections; the utter craziness of Ho Chi Minh City and the tranquil relaxation of the Mekong Delta.

We flew straight into HCMC from Hong Kong (our flight was at three, and Laura only finished work at 12).  We landed just as it was going dark and hopped into a cab having sorted out sim cards- £6 for calls and unlimited data.  Incredible value and very useful as even in rural Vietnam the data works (as shown by the bike drivers on their smartphones).  The only place that I know of that resembles the insanity of HCMC is Bali, but that seems relatively calm in comparison.  Cars are a recent addition to Vietnam as they used to have a heavy import tax, which means that most people are on mopeds or motorbikes.  Traffic lights are routinely ignored, and the general approach to crossing the road is just to keep walking as the traffic flows around you.

As is traditional for when we stay in a city we stayed a bit further out (District 5, about a 40 minute walk to the backpacker district) and walked everywhere.  It’s not an easy city to walk in, as the pavements tend to be covered with things for sale or parked scooters.  It’s a city of mixed architecture; part new and flashy, part old and run down.  Despite the many warnings online before hand we didn’t get hassled or have any issues whatsoever; perhaps because we stayed away from the hardcore tourist areas.  Even at the War Remnants museum, one of the biggest tourist attractions in the city, there was just one kid outside selling coconut water.

The museum itself is brilliant, and shows there is two sides to every story. It’s (understandably) very anti-American, and paints a horrifying image of the war. There’s no filtering here; pictures of corpses and people being tortured mean it’s not for the faint hearted.  Outside there is a great selection of military hardware from the war, and a lot of the significant buildings (like reunification palace) also have a couple of fighter planes outside. There must have had plenty left over.

After two days we were definitely exhausted. Everyone we spoke to beforehand told us Saigon is like marmite; you either love it or hate it. I think I lie somewhere in the middle though. It’s amazing how cheap everything is, and getting to zip around on the back of a scooter on a foodie-tour was an amazing experience (the highlight for me was eating frog; it really does just taste like chicken).  But with no underground or rail system it’s a frustrating city to get around, relying on taxis (relatively expensive) or busses (which are unreliable). 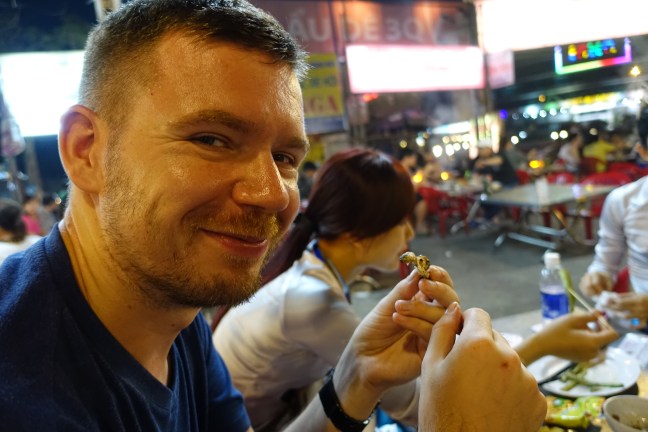 After two nights we set of for the Mekong Delta in very southern Vietnam. We turned up at the bus station and managed to buy a ticket for the next bus which we were shuttled onto quickly for a speedy departure.  This is the first time I’ve ever been on a sleeper bus; three columns of bunk beds with a quintuple bed at the very back.  As a bit of a transport nerd I found this exciting and would highly recommend it.  We were staying pretty much in the middle of nowhere, so after arriving at Vinh Long bus terminal (then waiting for an hour for a mythical shuttle bus that never appeared) we then jumped in a cab to a ferry which we crossed on foot, before being met by a couple of Xe om’s (motorbike taxis).  They impressively balanced our massive backpacks up front and us on the back (not as impressive as the guy we saw with 3 pigs on the back of his bike today though) as we then drove for another 30 minutes into the middle of nowhere to our accomodation.

The guesthouse was lovely; a pool (a rarity around here), darts, pool table, 40p bottles of beer and some amazing, freshly cooked Vietnamese food helped us to wind down after the insanity of HCMC.  Although the rooms left a bit to be desired (the bed was considerably shorter than I am, and the lack of aircon didn’t help) for 15 quid a night including breakfast we couldn’t complain.  It also had the most incredible river side area for relaxing by, with some amazing sunsets. 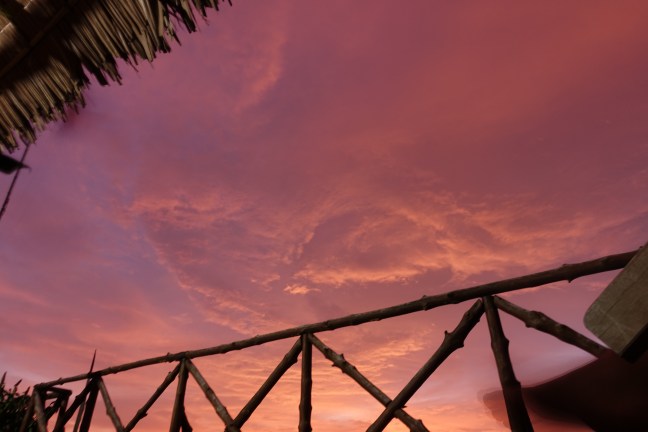 After 3 nights we set off on a (very local) bus to the near by town of Can Tho, to another guesthouse about 5km outside of the city (still in the Mekong Delta).  Our room is completely open (we’ve got about 2 and a half walls) with dual hammocks, and there’s a pet pig called Bacon. 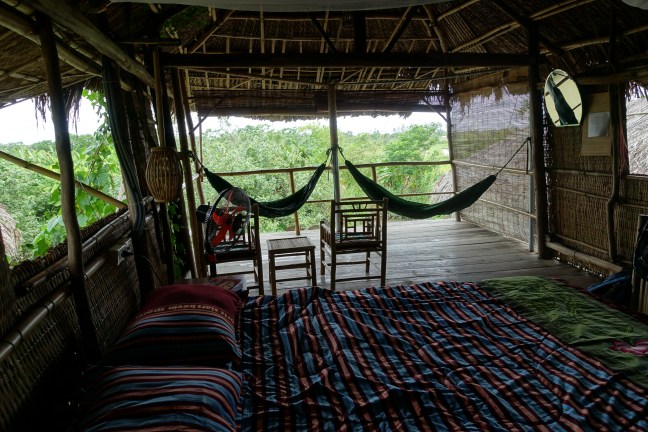 Some quick highlights of the trip so far: