So Laura’s been nagging me for a while now to write a blog post dedicated to Vanatar, our campervan, and just generally driving around NZ. 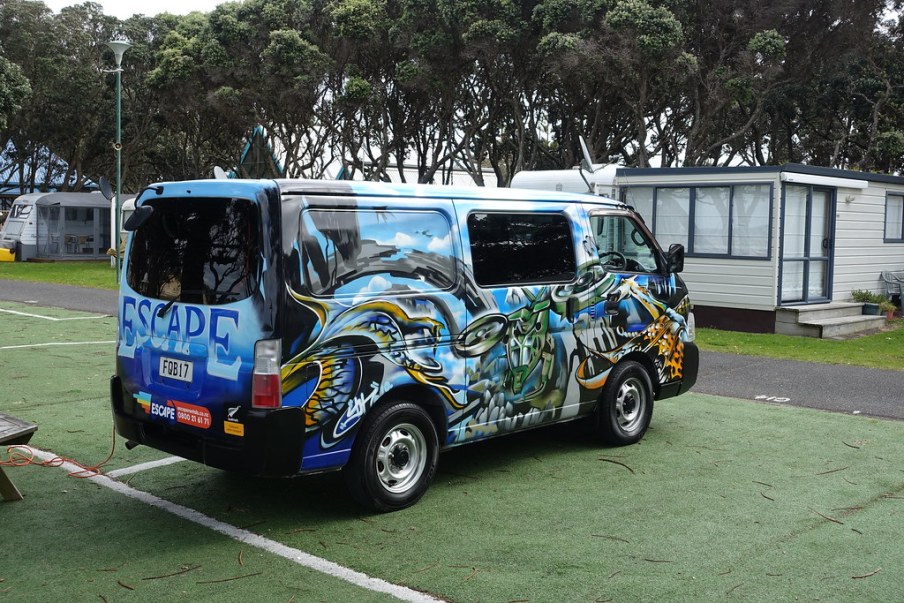 The mighty Vanatar, fear all ye in his wake.

To catch everyone up; we had intended to buy a campervan but decided not to because:

b) We know nothing about vans, and would likely buy a lemon

c) We liked the idea of having 24/7 roadside assistance, and someone we could call/email if something went wrong, on a van we knew had been roadchecked and used for similar purposes

As a result we decided to hire and ended up with Vanatar, our Avatar themed van (no, we didn’t get to choose the design although Laura loved it from the start and it’s grown on me.)  Just to caveat, we didn’t come up with the name either: all the vans from escape have names (see here for other designs/names.) We also decided to get an automatic, because Laura has no clutch control, I can’t find 5th gear, and neither of us have driven a van before and we thought it would be easier this way.

Driving wise, Vanatar is exceptionally simple to drive. You just put your foot down! Sometimes he’s a bit slow to kick up through the gears, and he’s a bit of a fuel monster (particularly on hilly, winding roads.. which is almost all of NZ). The roads have really taken some getting used to. With the exception of a little bit coming out of Auckland, there’s been nothing close to resembling motorways like in the UK. Everything is 1 lane in each direction, with passing lanes every 5-10km. All of the roads seem to be winding, which would be great in a sports car, but less fun in a van.  It’s been quite windy too which has been a challenge as it really shifts the van about on the road.  And there are so many hills! Steep ups and steep downs.  However, the routes are almost universally beautiful; forest and coast and fields as far as the eye can see.  It’s some really great driving. 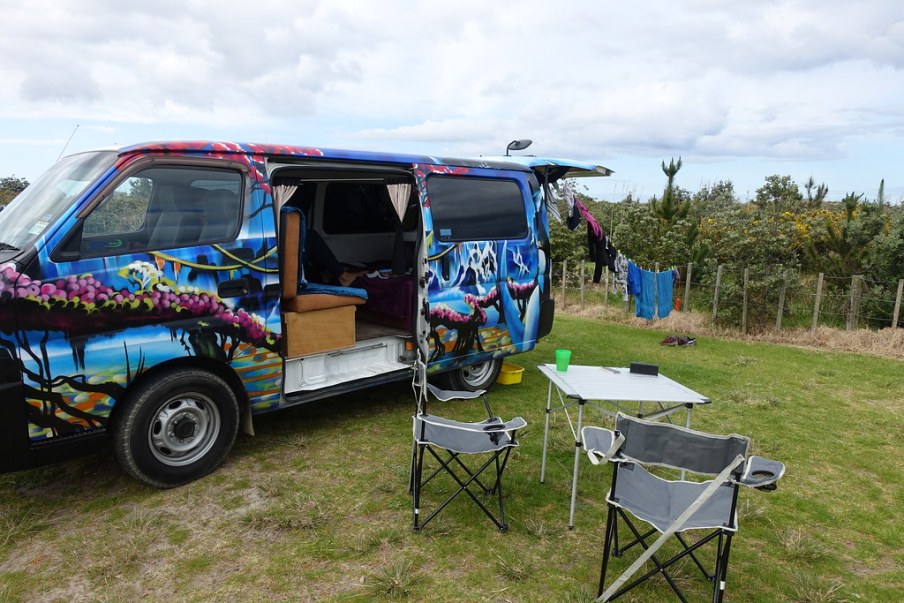 As a home, we currently have a bit of  love/hate set up- we love him when it’s warm, and hate him when it’s wet.  The above photo is Vanatar in his prime; table and chairs out with music from the jambox, clothes drying on the line and boot up for the view.  When the weather is like this living in a van is awesome. After giving us 2 days grace, the weather has now caved in and has set into a regular rhythm of sunny mornings then torrential rains in the afternoon and evenings.  This is not fun to live in.  The van can feel quite cramped, particularly if it gets messy (which it does, because there’s so little space to put stuff).  There’s nowhere inside/warm to put coats and clothes to dry so everything just feels damp. Then to top it off, Vanatar has almost no insulation it seems, so every morning the roof and sides are covered in condensation; this burns off quickly if there’s sun, and we’re wiping it down too, and we’ve now got a dehumidifier set up, but if it’s raining it can be pretty grim in here. 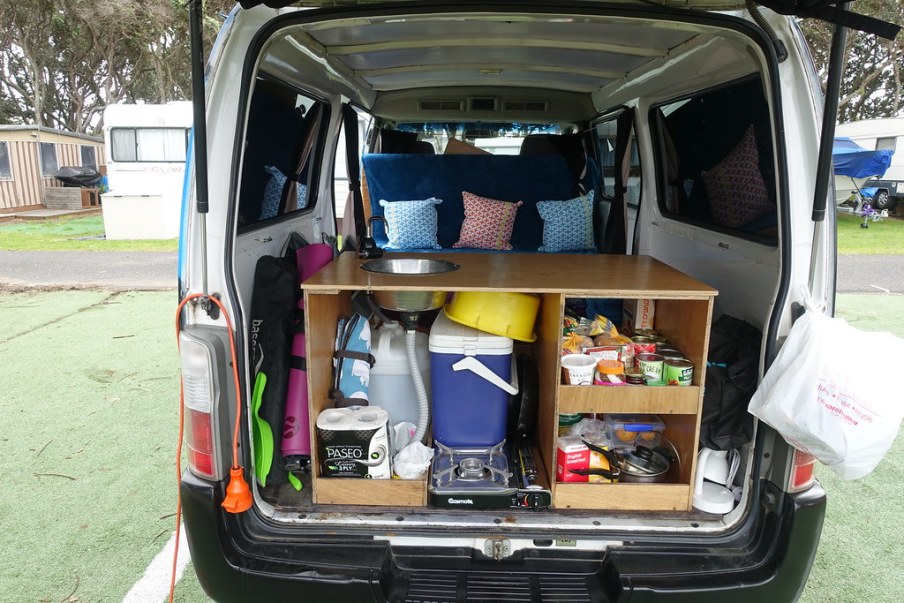 Griping aside, the weather will gradually shift to warmer times as we’re heading into summer and we should reap the awesome benefits of campervanning.  We can go anywhere, which is both awesome and difficult.  There is so much of NZ, and we’re now realising that despite having 3 months here we’re going to miss out huge chunks of it (we’ve already decided to miss out on 90 mile beach and Cape Reinga).

We were also hoping to mostly stay in the DOC (department of conservation) campsites, as they’re much cheaper than private, but we’ve found that there aren’t that many and we’ve ended up staying in private places like Top 10, which I’d roughly equate to something like Haven holidays in the UK (but with space to bring your own campervan.)  I’m really pleased with this, as they have hot showers (and it’s far too cold to for a DOC cold shower!) but they’re about double the price which means we’re spending a bit more than we’d like; conversely, with only a (pretty crap) chill bin to use we’ve been eating vegetarian meals each night which has saved a bunch of money.

In summary, it’s taking some getting used to, but I think as the weather improves we’re going to love campervanning more and more.