The views just keep getting better and better. I don’t understand how. NZ has definitely wrecked all walks and scenery in the future for us because we’ve been spoilt so rotten. 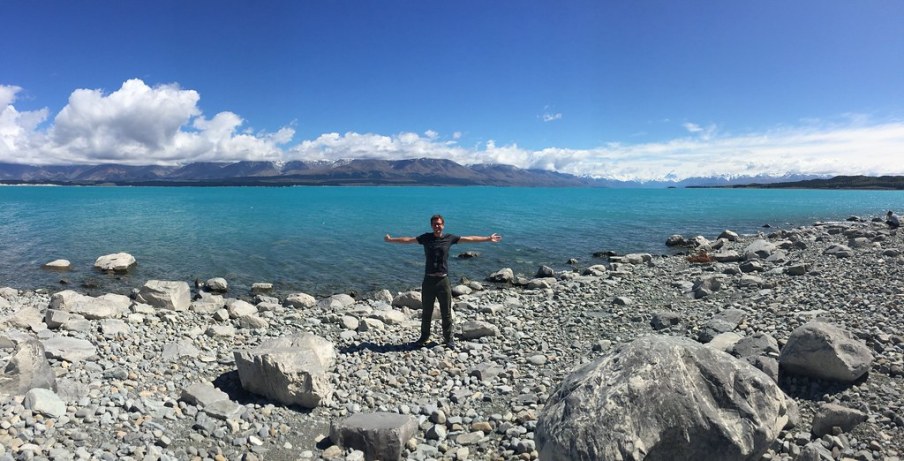 After Dunedin we headed over to Mt Cook, the tallest peak in NZ at 3724m.  Fortunately it’s not something you can walk up, but it has plenty of walks around it.  We camped in a simple but beautiful DOC (read: cheap) campsite and used it as a base for 2 or 3 walks, the main one taking us to a lake with actual icebergs in it! Small icebergs, but they count. 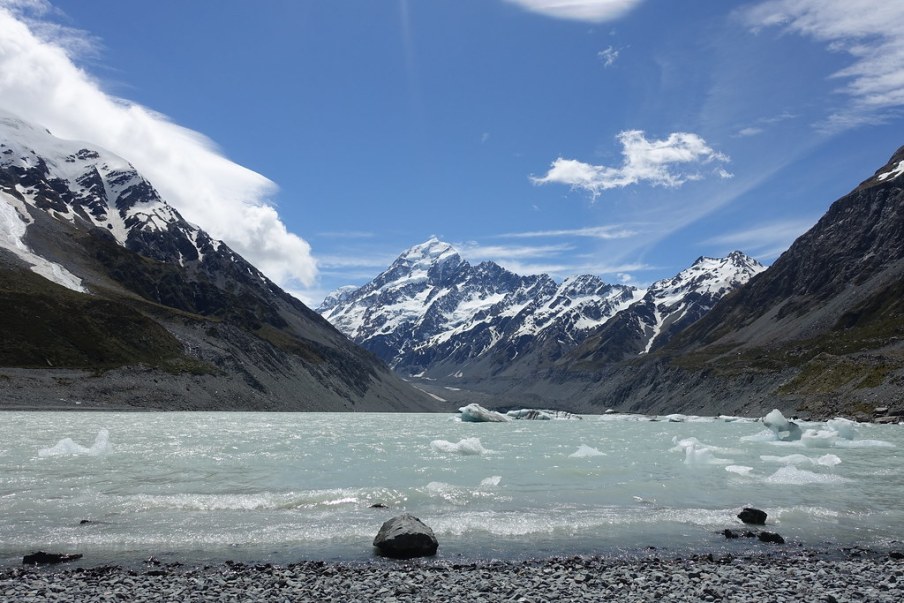 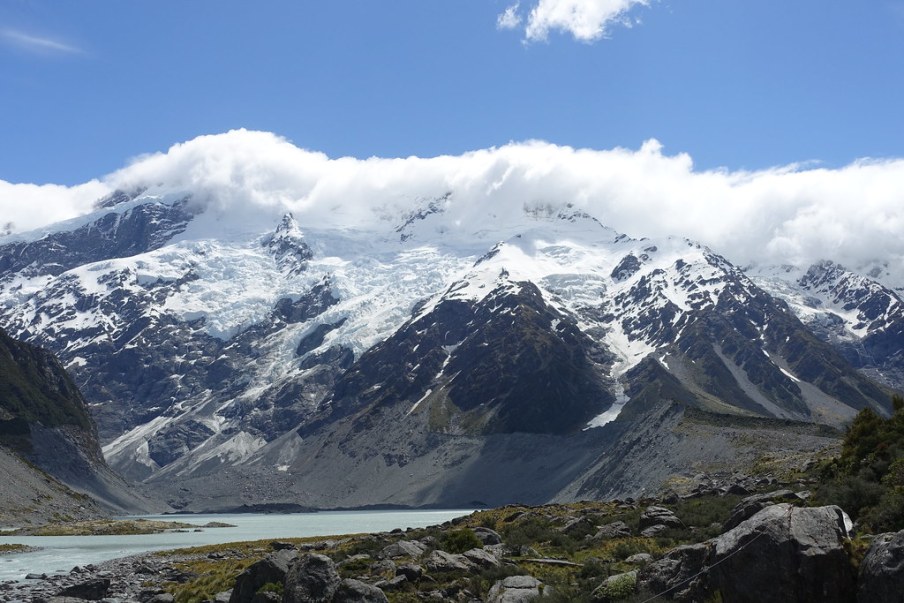 As you can see from the photos, the views are incredible.  The way the cloud rolled over the peaks and formed a roof over the mountains was something I’ve never seen before and created a really beautiful effect. 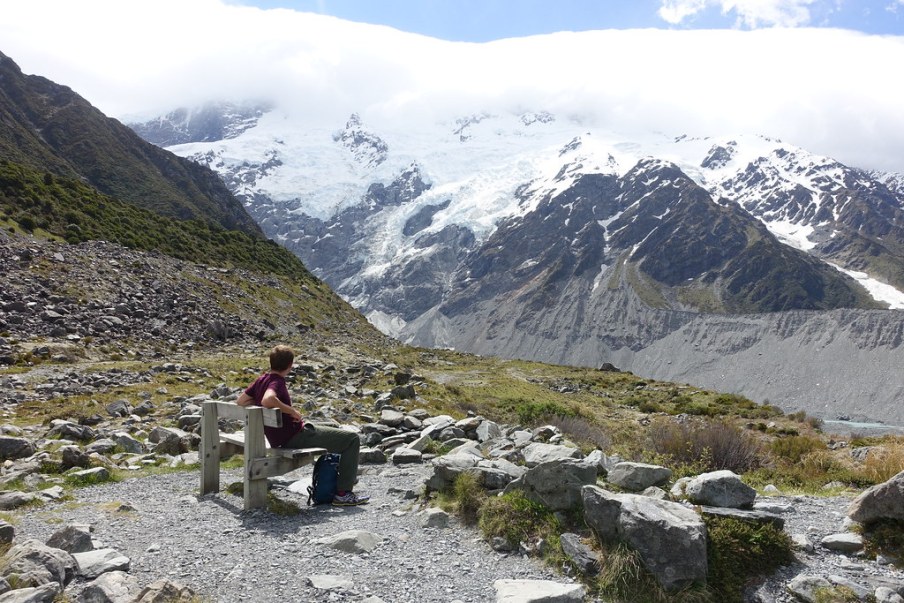 Desperately in need of a shower (they tend not to have them on DOC campsites) we then barrelled on to a town called Geraldine.  As you can see on our travel map we’ve been covering big distances each day in the last week, which has cost a fortune in fuel but we’ve packed a fair amount of walks in. There’s not a huge amount else to do around this neck of the woods to be honest, as significant towns are few and far between.

We had intended to use Geraldine as a base to go and do a significant day walk at another mountain, Mt Somner, but once we’d gotten there we discovered our guide book had massively undersold the nature of the hike; the path was steep, poorly formed, and slippy. The weather was crap and we quickly gave up and decided to backtrack to peel forest to try some easier walks.  Whilst these were perfectly nice, the weather was quickly turning and we were both a bit fed up.  After a quick google I managed to find a nice boutique cinema a couple of hours away in the ski town of Methven, and it turned out to be the release day of Spectre in NZ! Highly recommend it, possibly the best Bond yet.

We’re only a day or two from Christchurch now.  This morning we did a 4 hour walk at Rakaia Gorge, an incredible river with luminous blue waters that have cut out a huge chunk of the landscape.  Whilst being an enjoying and challenging walk, it was slightly marred when, at the big view at the end of the walk, a large bird of some sorts (“The bird equivalent of the Indominus Rex”) swooped down and stole Laura’s sunglasses from the top of her head! Laura is fortunately unhurt, but understandably angry at the bird (Laura: “I hope it chokes on the plastic.”) 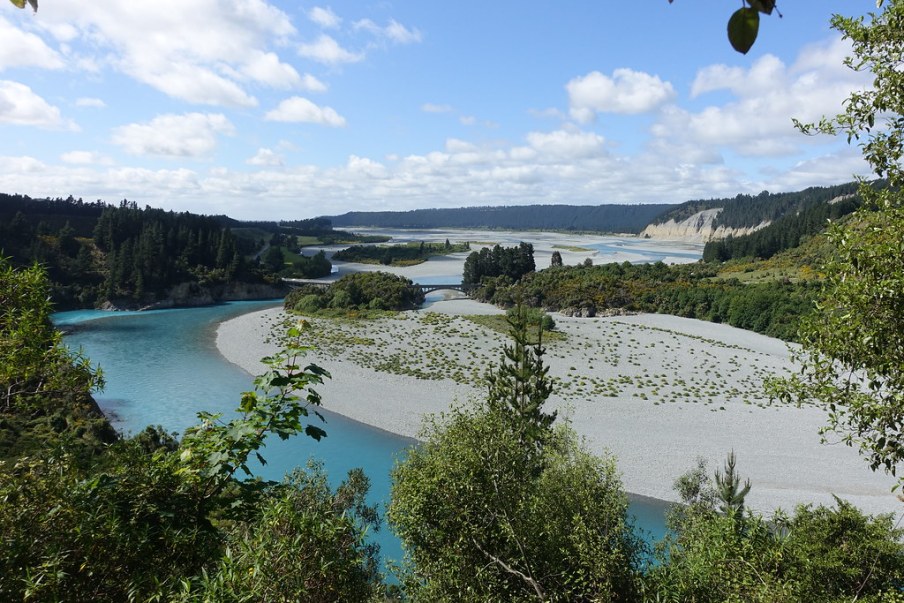 For tomorrow, we have decided first to come and explore Arthurs Pass, one of the 3 routes over the mountains from East to West on the south island.  Surprise surprise; it has lots of walks, which we’ll embark on tomorrow. We’ve driven over to the West of the pass, and will head back East in the next day or two.  Arthurs Pass has to be one of the best roads we’ve driven on the whole trip though, with huge mountain ranges on either side looming over as you drive, along with some fun 16% gradient roads thrown in to test Vanatar’s prowess.