To be fair, it began even before we hit Laos.

This was just a really badly organised bus company. We went through Asia Van Transfer because they use the new road upto Laos, which is supposed to cut off a lot of the journey time. Fair enough, we paid about $7 more than a local bus, but it was supposed to cut off 4 hours from the route they take. And for a few hours, all was ok, even though it was at full capacity and Sam was sat on an ‘extra’ folding seat. We were then transferred onto a smaller mini bus, with more people on it. Still, all was fine, we were off to Laos, we were excited! We started to get a bit irritated about the state of the road but it was alright. Then came the border. Hilarious waste of an hour. Our Laos mini bus eventually rocked up and, surprise surprise, it was smaller still. Now everyone’s just pissed off and sitting 4/5 people to a 3 person seat. 11 hours after leaving SR, we rock up in Nakasang only to then be charged more to take a boat to an island. With a drunk boat driver. After waiting around for 30 mins whilst he finished his beer with his mates. Fab. 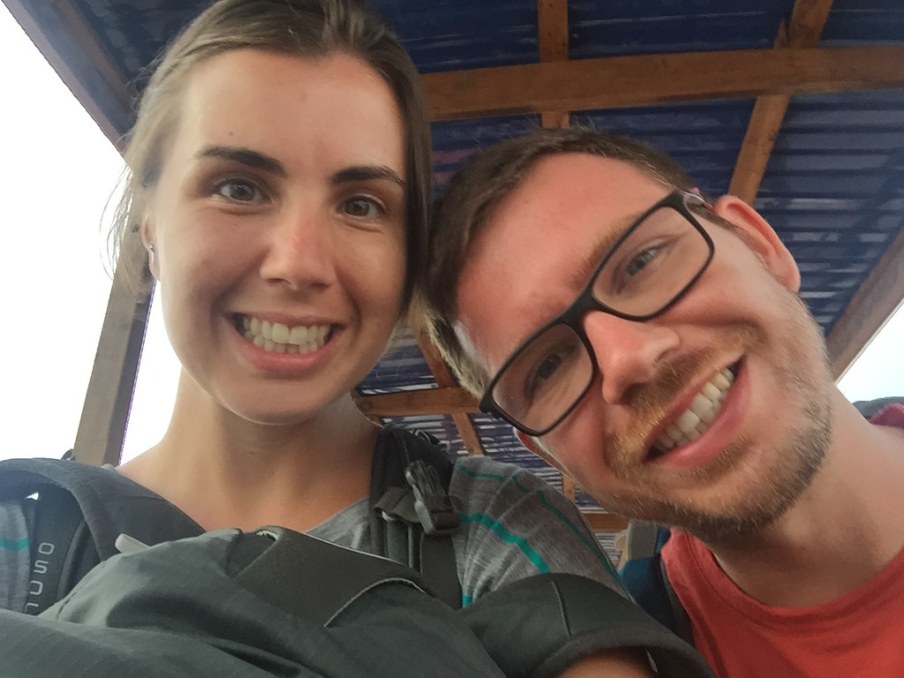 Here, we took a boat, which is meant to hold about 8 people, to Nakasang. But instead of 8 people, lets put 16 people plus all their luggage on the boat- GREAT IDEA. The front of the boat was sagging, but we all made it in one piece. At the bus station, we then bumped into a family we’d met in Cambodia and were having a chat with them, so missed the first mini bus. Ok, no problem- we’ll take the second. Oh but wait- we got on the second bus, we drove back down to where the boat pulled up and sat there for an hour, waiting for others, who were presumably on a boat coming to meet us? No, apparently not. We then drove back down to the other end of the village, sat at a junction for 30 mins, waiting. Where were these people? Even the bus drivers didn’t seem sure. Finally we went BACK TO THE BOAT ARRIVALS to wait some more. Eventually they turned up and we were on our way, arriving about 2 hours late.

This was so bad on so many levels. We’ve really enjoyed the sleeper trains we’ve done in Thailand and so were actually quite excited about taking a sleeper bus. We got to the bus after a wait of 90 mins, were the first on, along with another couple we’d met. We immediately headed straight to the front of the upper deck- the view was awesome, our mattresses were comfy and so much leg room. Ah. There’s seat numbers on our tickets. Hhm. Maybe it’ll be fine…….

No it was not fine. We realised that our seats were at the very back, as part of a 5 berth bed. Panic set in and some Japanese men came to point out that we were lying in their beds. I started making travel sickness noises and they were so lovely, they said they would swap with us. Phew. Disaster averted. Then came the ANGRY BUS DRIVER. He basically shouted at us to swap back and then shouted again for Sam to lie next to the window and me next to him because 3 local women were coning to sleep next us. BRILLIANT. 14 hours later, I’m pretty sure the woman next to me wished she’d had some sort of weapon. I know I did. She basically elbowed me all night and I was trying so hard to lie on my side so as not to take up too much space. After about 9 hours, I gave up caring and just started elbowing her out of the way. Fairly sure Sam slept through most of the journey- he didn’t dare complain to me about having no space, I was ready to do a double elbow manoeuvre on him if necessary. 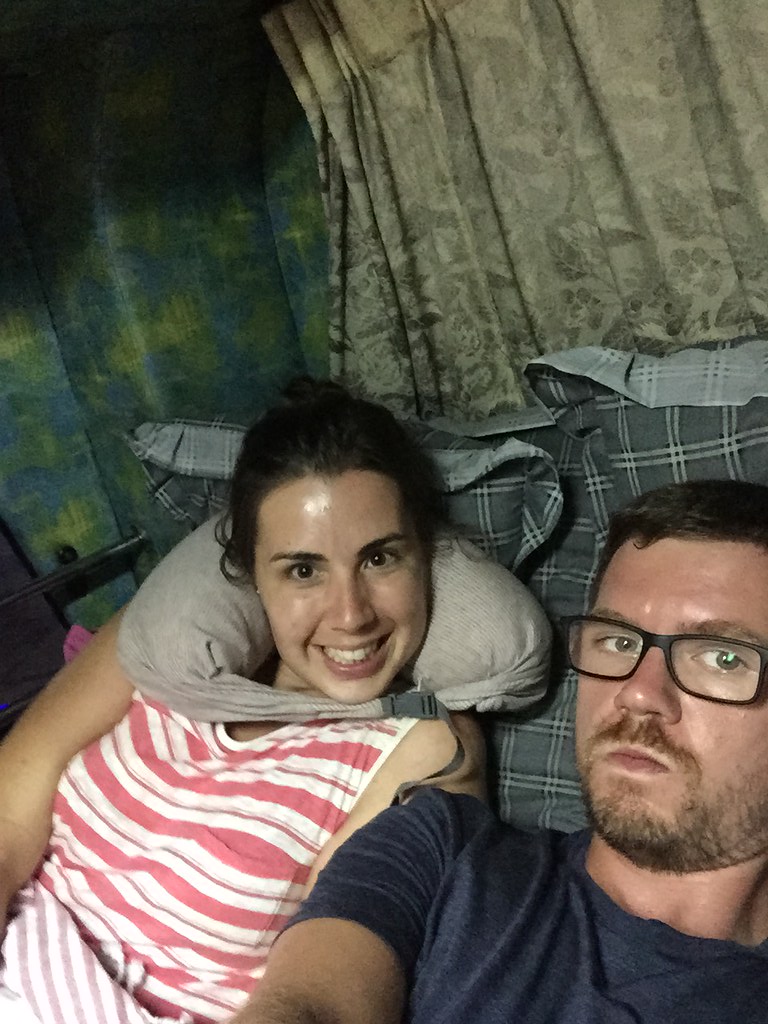 Before the shouting…..even here Sam is pissed off….but it was about to get so much worse 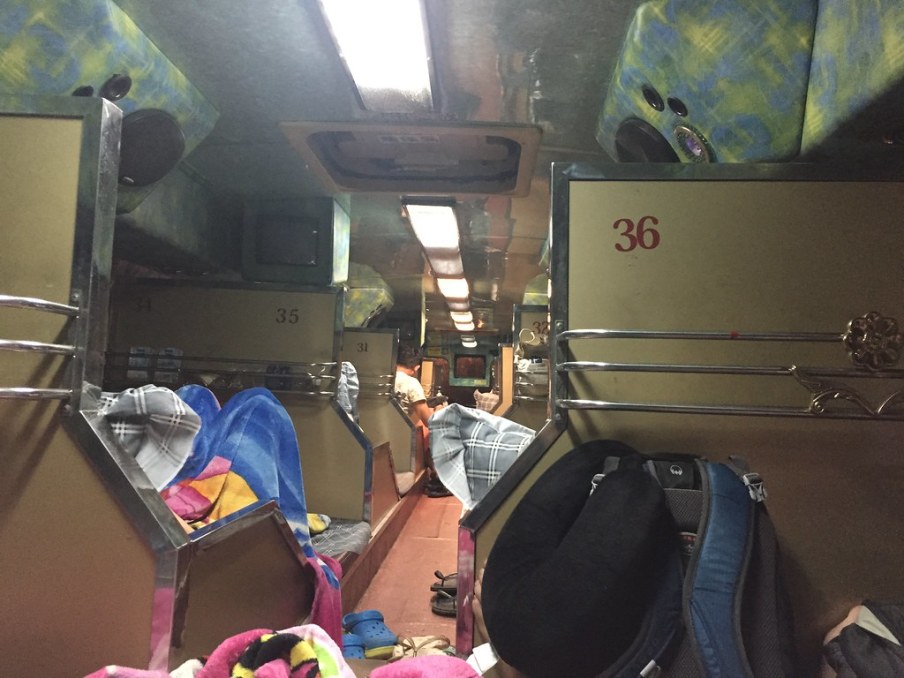 In fairness, this was a relatively good trip. The bus was only half full and so we got a double seat each. We’d heard beforehand that this road was really dangerous, lots of narrow cliff sides, gangs etc. Before the bus set off, a man came around selling travel sickness tablets and the driver gave out sick bags. Trepidation set in.

Who are these wimps that made all of this up? That’s right folks, Lonely Planet strikes again! The scenery was stunning and the roads were no narrower than when we drove round the Cotswolds last summer. Yes, we seemed to stop every 20 mins for a break but it was ok. About 30 mins from LP, we saw a broken down bus up ahead. Now running 3 hours late, you could see all of the westerners on the bus praying that we weren’t going to stop and help. But our bus drivers were so lovely, we did. 20 minutes later, we realised we weren’t going anywhere quick and so we all got out to have a walk around. It was really beautiful and there were good photo ops. I thought I’d go and have a look at what all the drivers were doing and, I kid you not, drivers from both buses are standing around behind our bus, having a cheeky cig. They were not the kind, helpful drivers we thought they were. They just wanted yet another break. 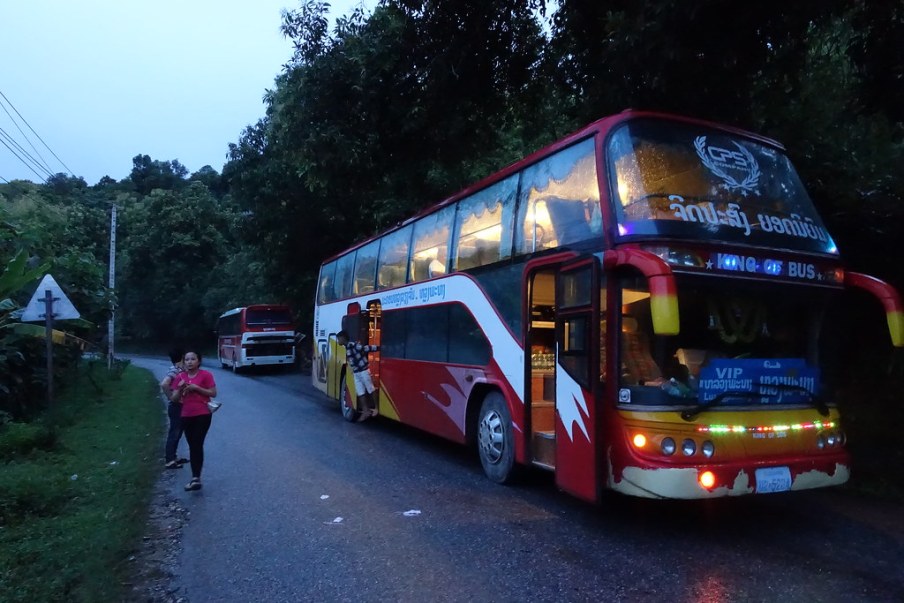 This wasn’t too bad- double seat each, cosy blankets, bus actually got a move on and arrived ahead of schedule.  Just one problem…… 12 hours of LOUD Laos pop. Sam likened it to the demo function on a keyboard with some terrible singing over the top.

Hurray, finally a bus that I can rave about! Huge minibus, only 4 people on it, super speedy driver. LOVED IT. Oh yeah, and it started after the border crossing. The added 1.5 hours was on the Laos side with late pickups and faffing.