Life on a floating island

It’s been a nice mix of quiet and busy days since we finished the inca trail. We spent 1 more night in Cusco after the last post which was lovely; we got to go for a meal and drinks with 6 of the people from the Inca trail who were still in town. It’s been a long time since we went out for drinks with other people and was a really nice treat (even if we went to a vegan/veggie restaurant, not in line with my carnivorous sensibilities).

We also went for our first massage in South America! It was only 14 quid each and was absolutely wonderful and much needed after all that walking.  It was a great couple of chill days in general, with us mostly lounging around and drinking coffee/hot chocolate.  Our AirBnB host even let us stay in the apartment till 9PM on the checkout day which was really helpful.

To get around Peru and Bolivia we’ve signed up to PeruHop and BoliviaHop, effectively a tourist bus that shuttles people between La Paz in Bolivia, Cusco and Lima in Peru with lots of stops in between. It’s exceptionally good value, but at the cost of sleeping well- it’s a regular bus so when the journey is a night bus it’s really uncomfortable! We were travelling from Cusco to Puno, the border town to Bolivia and situated on the wonderful Lake Titicaca.  At least the bus wasn’t busy and we got 2 seats each which helped.

Our main objective in Puno was to visit the floating islands of Uros.  On Lake Titicaca they’ve built over 80 floating islands, effectively made up of mud block covered with 3m of reeds.  We’d booked to stay the night at a hotel-cum-homestay to discover how it all worked and we were not disappointed!

Having jumped on a little boat for 30 minutes we arrived to our island. It looks like something from the caribbean, as there’s wood and reed everywhere.  It’s hard to explain. The island is really very big, and had about 8 or so rooms plus “restaurant” (the eating room.)  All power comes from solar, so its basically used for lighting and nothing more. Toilets were composting, but there was a hot shower (also solar powered.) 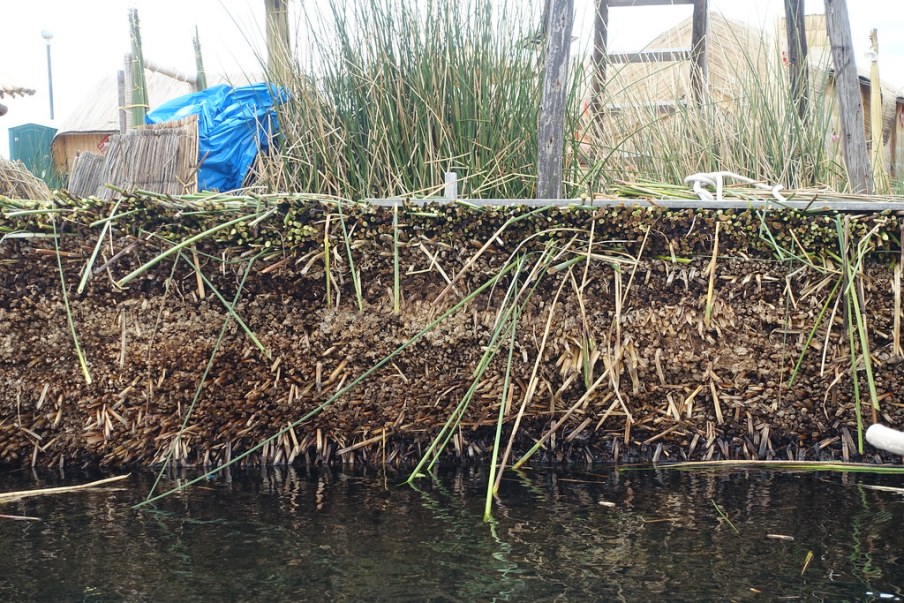 Side view of the island: that’s all just reeds piled up.

Having slept terribly on the bus (and still exhausted from inca trail and weeks of uncomfortable beds) I proceeded to spend the rest of the day napping in between the various activities. Fortunately Laura was in a better state and was able to shepherd me round.  First of all we got to go with the owner out into the reeds-  to collect the fishing net (only had a few small fish in this time, but apparently it’s used to catch everything including the local specialty of trout,) and then to show us how they collect the reeds (effectively cutting it down with a home made scythe.) As with everything in Peru, part of the reed can be used as medicine apparently. The majority of the talks whilst we were here were done in Spanish, and both of us were very impressed that we understood about 70% of what was said.  It helped that he spoke really slowly, as his first language wasn’t Spanish but one of the local languages, Quecha. 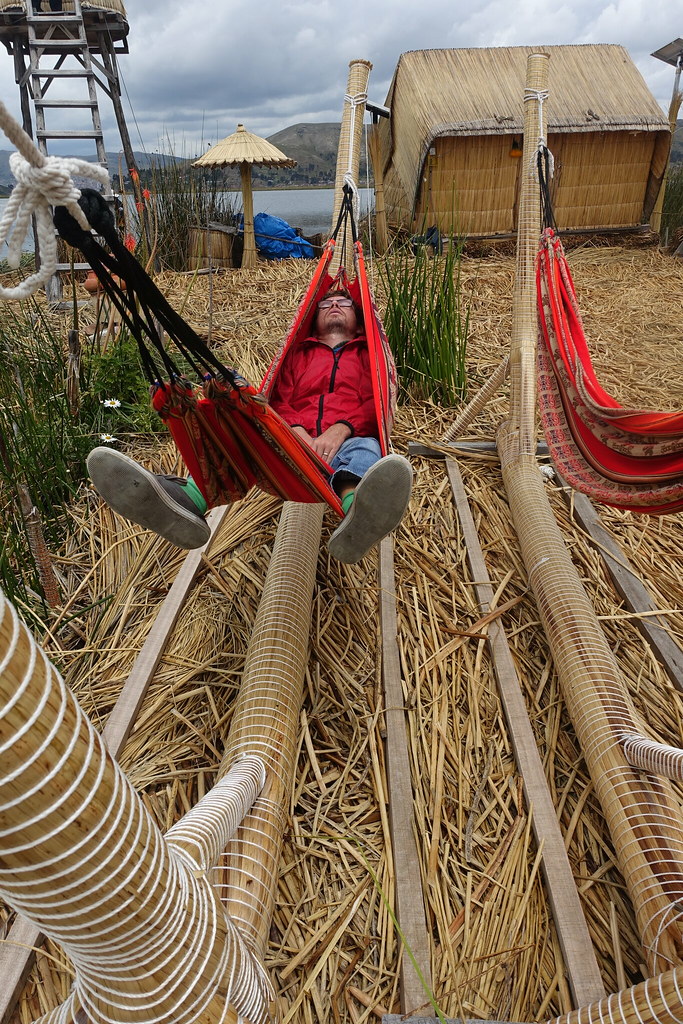 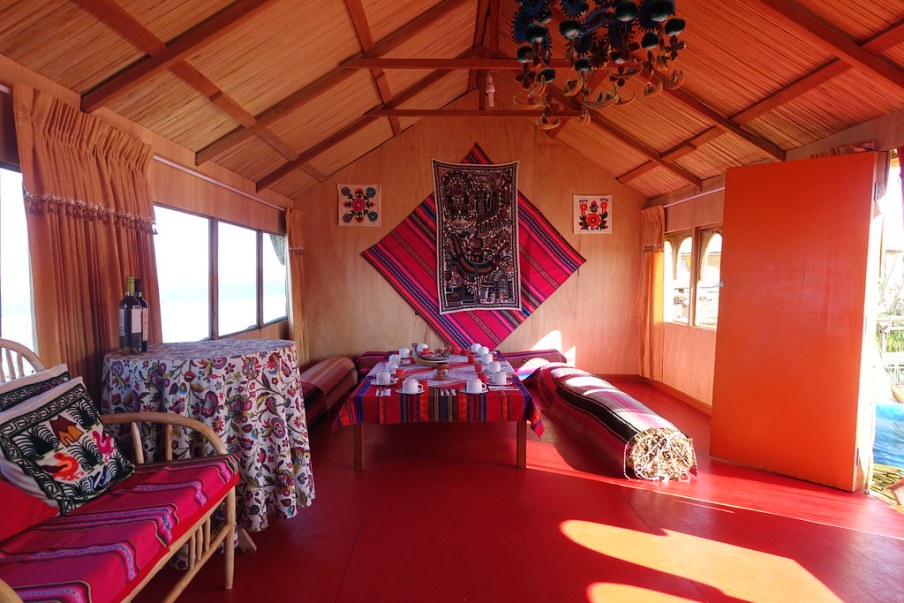 Following lunch and a more substantial nap, it was dress up time. We were given local Peruvian clothing to put on for photographs. We both look ridiculous but it was surprisingly fun.  This is genuinely the clothing we’ve seen people wearing around. The only thing missing is a pork-pie hat that a lot of the local women seem to wear. Laura would have looked so stylish! 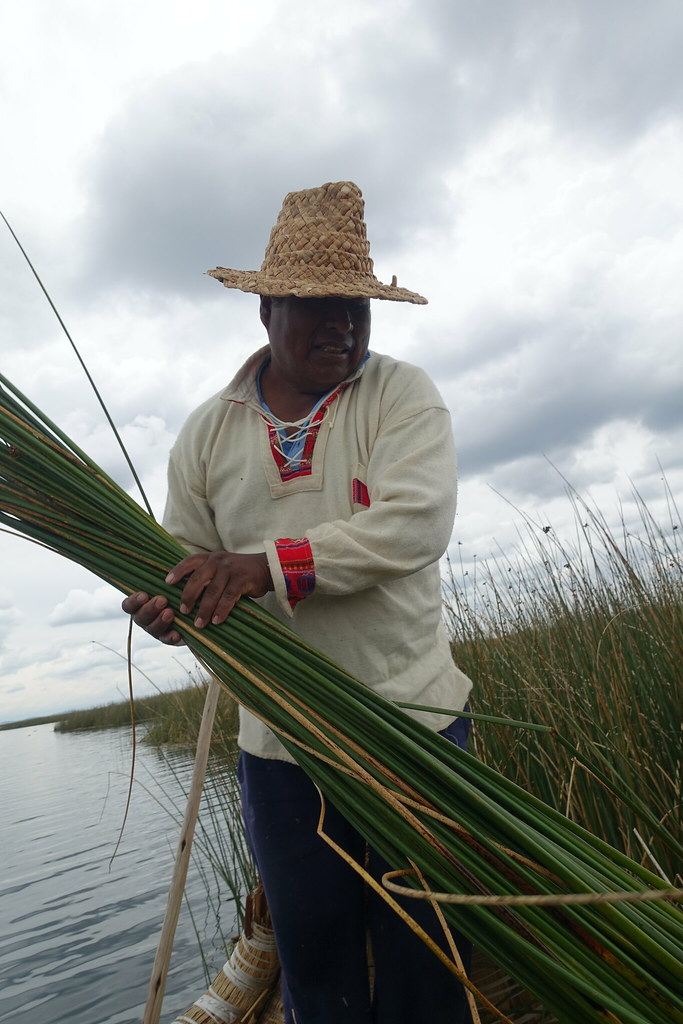 We were then given a short talk (again in Spanish) as to how the islands are built.  It’s effectively a combination of squares of mud from under the reeds, and about 4 meters of reeds piled on top. Voila, floating island! Last year they actually moved the whole thing to somewhere quieter which I find very impressive. It’s kept in place by 11 anchors, and it felt completely stable during our time there.  Wouldn’t like to try it out when it got windy though. 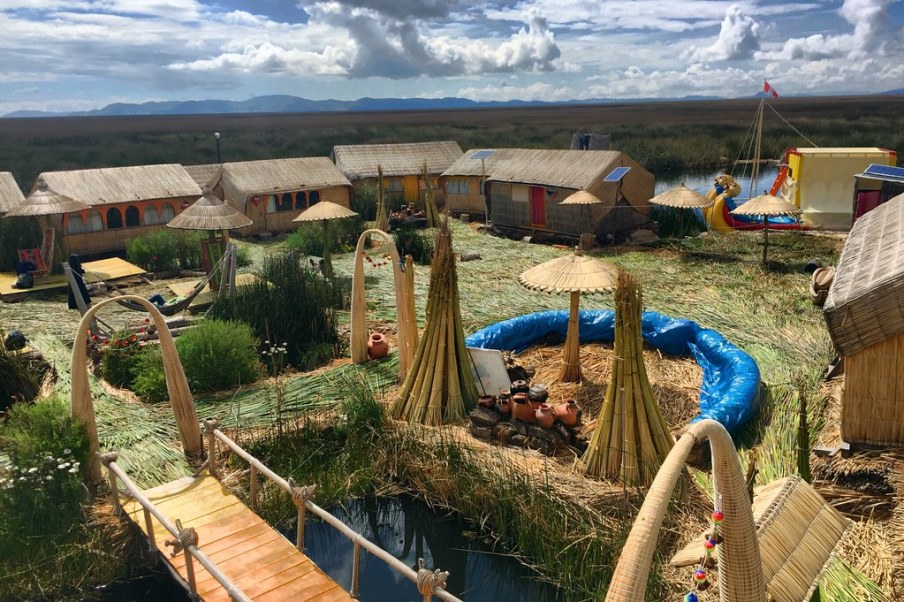 View of the island from one of the “watch towers”

We were then treated to a beautiful sunset with colours to rival our favourite sunset of the trip on the Mekong Delta.  It was getting really chilly at this point but fortunately during dinner they’d gone to our room and given us a water bottle each under our 5 or so thick blankets.  It’s the best nights sleep we’ve had in weeks and weeks!  I wish we could have stayed longer just for another night in the bed.  Alas, we had to head back to the mainland the following morning. 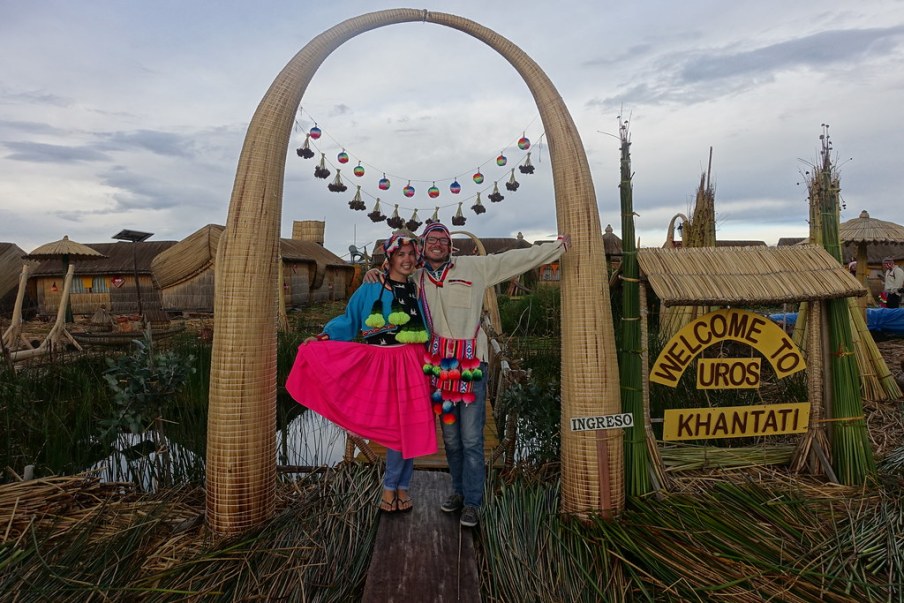 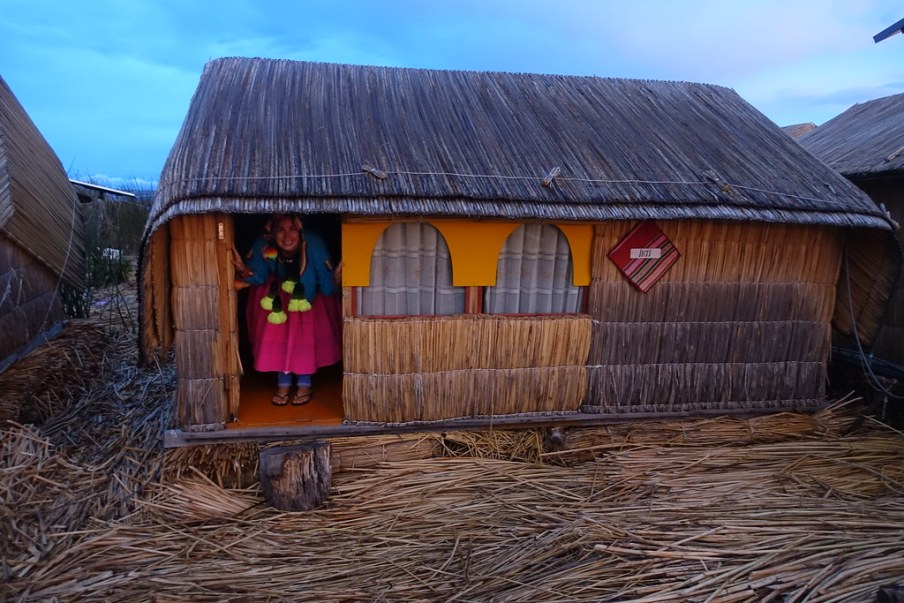 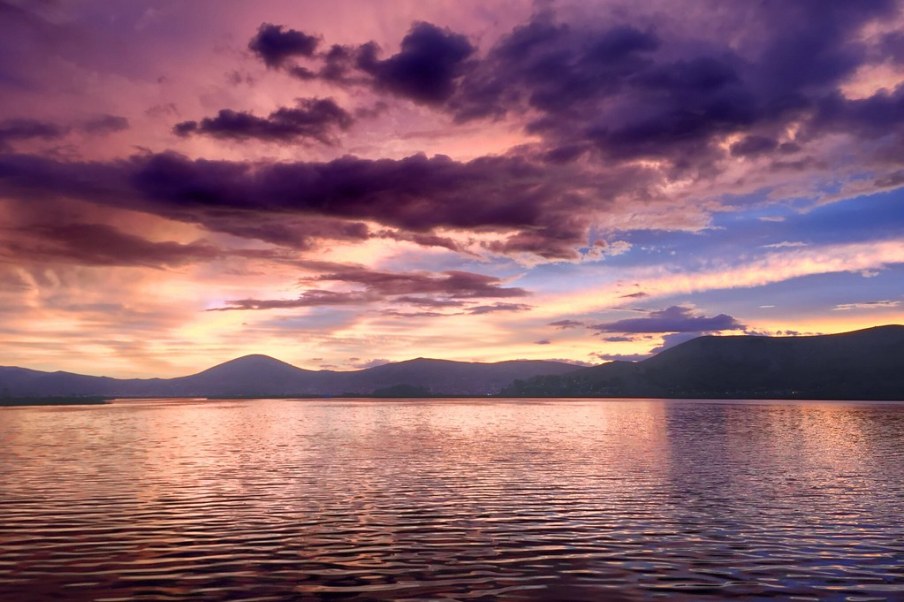 Continuing our action packed schedule we were then back on a tour bus for the afternoon to visit Silustani, an ancient pre-inca burial site about 45 minutes out of town. The reason it stands out is because the graves are cylindrical towers atop a large hill, a style the inkas then copied when they arrived.  The photos hopefully do it better justice than my explanation!  Each tower had between 20 and 50 people in it, and the oldest have been around from 500AD or so. 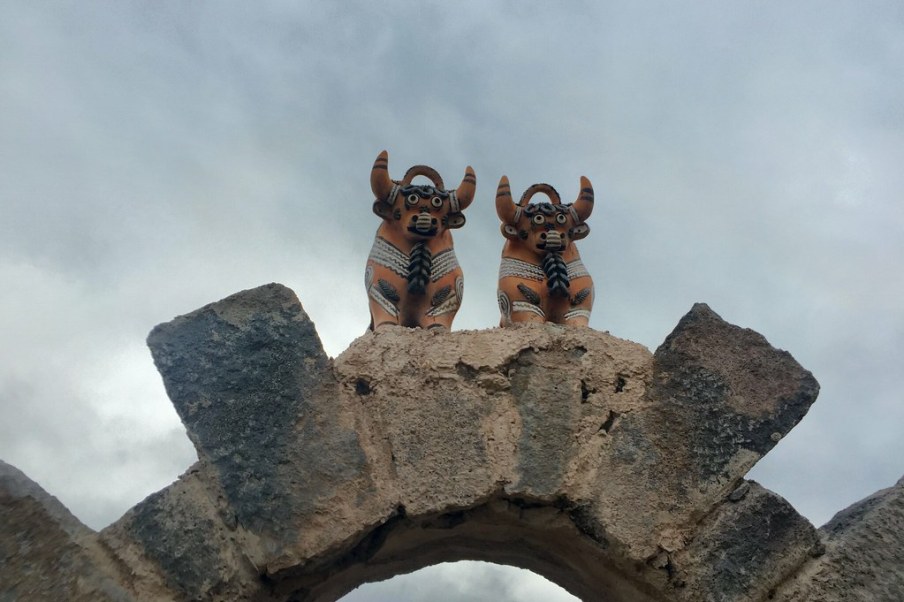 All the houses nearby had 2 bulls on top to guard from ghosts. 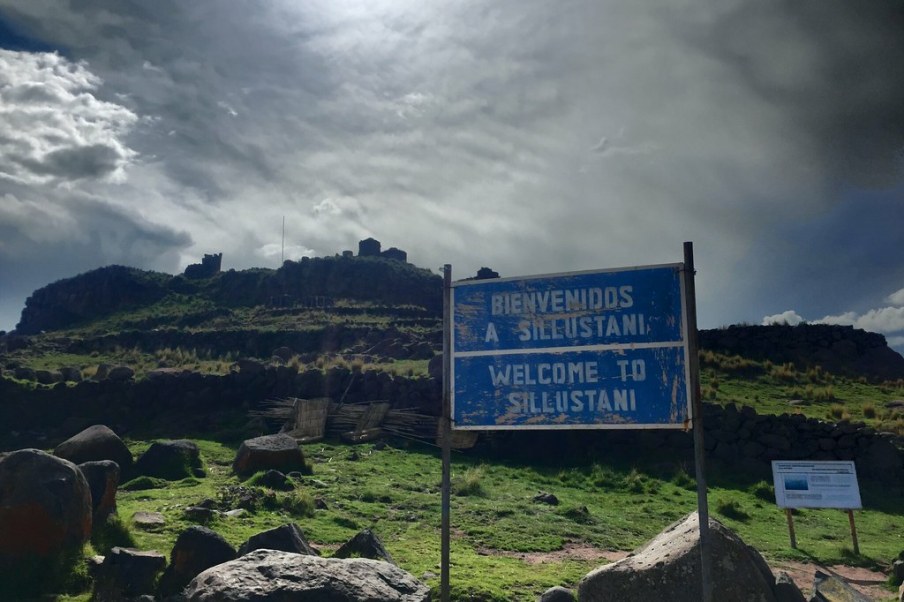 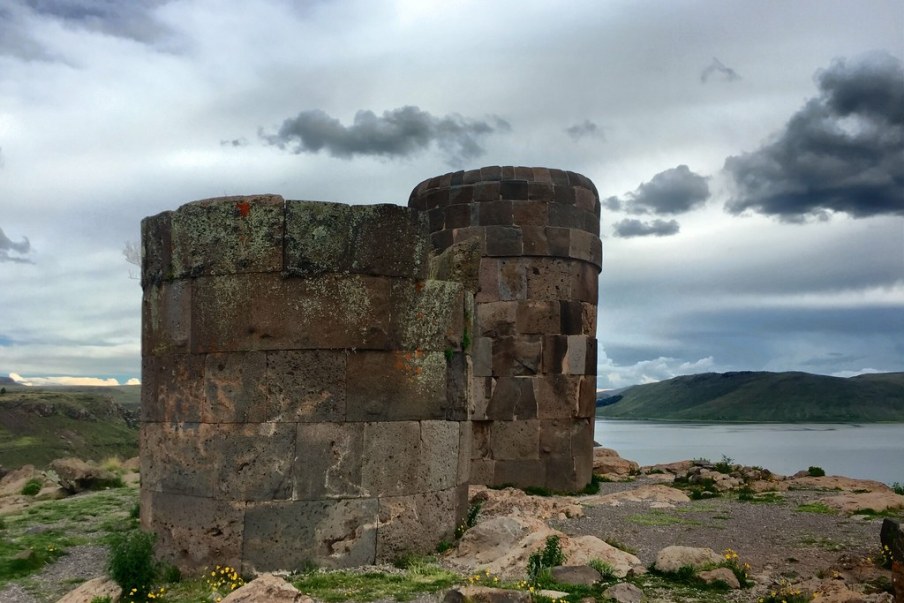 Puno from up high

Today though we have a chill day. Due to the bus timetable there’s none going today, forcing us to remain in Puno another day. There’s really not much to do here, so we’re both catching up on various work before we head across the border to Bolivia tomorrow. 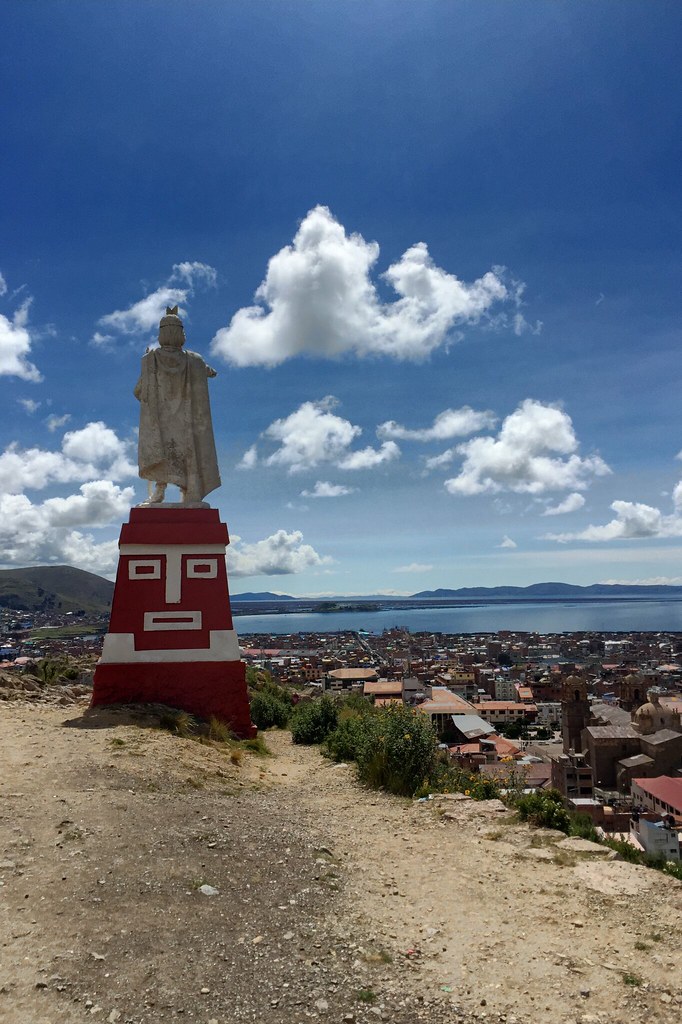