Laura loses another pair of sunglasses to nature

More on that shortly!

I’m writing this as we travel on yet another bus. After the luxury of 5 nights in one place in Pucon it’s been hard to be travelling around on buses again.  All the seats here have a big recline, and we always end up behind the one person that reclines the seat the whole way back.  It’s a pretty cramped writing space but needs must!

After the wonder of Pucon we headed south to Puerta Varas, a lovely little lakeside town in the vicinity of not one but two volcanoes.  It was really very pretty, with lots of nice little cafes and food trucks. There was even a local Chilean pan pipe/guitar band playing in the Plaza de Armas which we found surprisingly good.  This was just a stopover town to get us to our flight the next day but I’m really glad we went.

The next day was less fun, as it was full of transport: Bus (Puerta Varas to Puerta Montt), bus (Puerta Montt to the airport, after a 2 hour wait in the bus terminal), plane (we met a very nice man from the US with a Chilean wife and had a good natter about all things Chile and US,) taxi (to get into Punta Arenas to get our next stage) and bus (Punta Arenas to Puerto Natales.) It literally took all day but as masters of travel we took it in our stride, and even managed to fit in a delicious pizza and beer before our final bus.

But why did we go through all this? To visit Torres Del Paine in Patagonia, the 5th most beautiful place in the world according to National Geographic.  Located about 1.5 hours from Puerto Natales (which is the nearest town) it’s most famous for the W trek, a 4 or 5 day trek that takes in glaciers and mountains and lakes and much more.  We’d wanted to do this, but as we had no camping gear and the fact we don’t like camping, we decided to instead come down and do a couple of day hikes and explore the town. We weren’t the best prepared for this part of our journey; information on the net is all regarding multi day hiking so we thought it’d be best to get here and find out once we’re on the ground. Plus, most people book their flights, accommodation and their multi day hikes months in advance- this is an extremely popular place. We booked our flights 3 weeks ago. Enough said.

The most famous part of the W is Las Torres (the towers), a series of three mountainous peaks above a lake about 800m up from sea level.  We knew this was available as a day hike and was our itinerary for the first day.  This meant, having gotten to our hotel and to bed about midnight we then had to be up at 6:30 to get a 7:45 bus.  At the park we then had to queue to buy our passes (36 quid for the two of us!) before getting another bus to the start of the hike; this meant we didn’t get to start walking until 11. To top it all off the visibility was really poor, due to the terrible weather.  Nonetheless we ploughed on with smiles on our faces excited for the walk ahead.

The hike itself is split into 3 sections; a steep uphill section, a mostly flat section, then a really steep bit.  I found this to be the most challenging of the hikes we’ve done as my legs were knackered afterwards, but it was really enjoyable.  All the scenery around here is so dramatic and beautiful.  There was also a camp site at the mid way point which served hot drinks which meant when we were suffering on the way back we could recharge with hot chocolate and coffee. 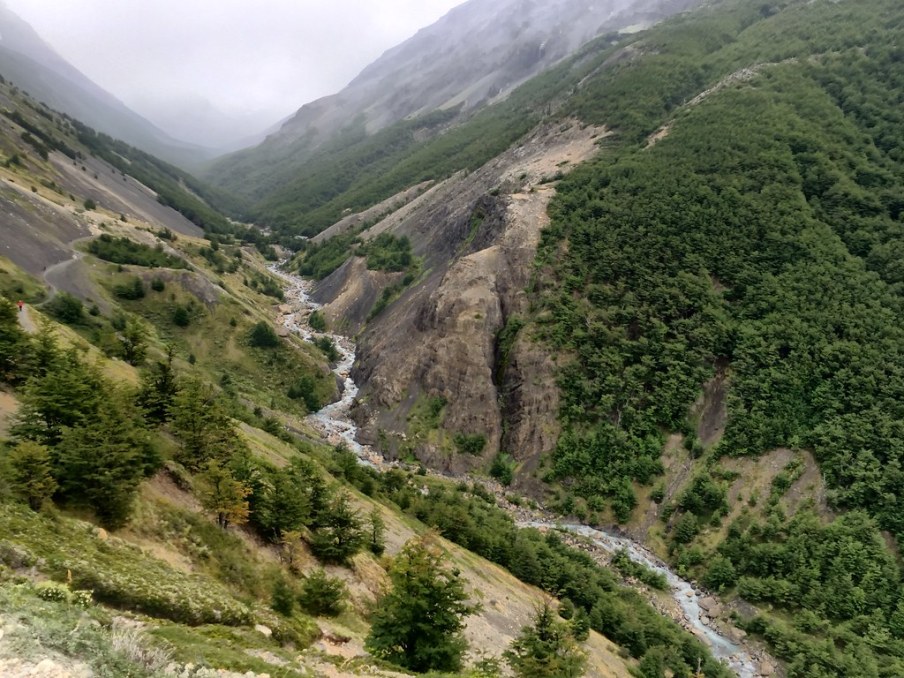 The hike is 25km and labelled as 8 hours but we managed it in about 6 and a half. It took us about 4 hours up, particularly as we were struggling at the top.  The path disintegrated to boulder climbing along with wind and actual snow, and there was a fair amount of traffic- it’s a really popular hike.  We made it though to find this lovely glacial lake at the top. It’s just a shame the towers were partly hidden by cloud cover!

The towers are at the back/right… in the cloud.

We wanted to stay up longer but it was too windy and cold so we clambered down at speed.  We got to the start of the trek again about 5:30. Fortunately, there’s a really fancy hotel at the start which meant we could relax with a beer and a cheese board. 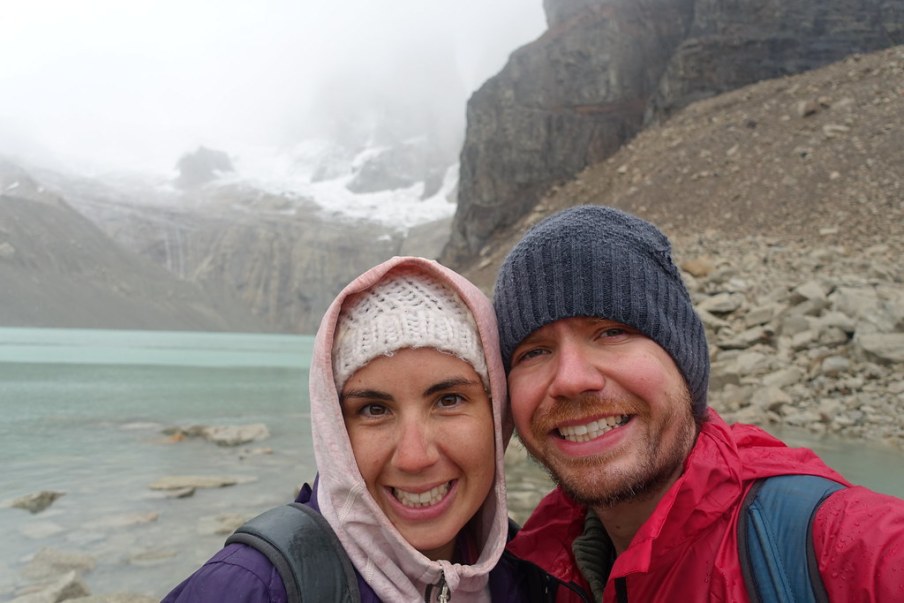 The second day of our stay I’d put my foot down to say I wasn’t hiking; the tickets are a 3 day pass but I was quite happy to have a days rest so we could properly enjoy the day after, plus the weather hadn’t perked up.  As a result we had a nice stroll around Puerto Natales.  Like everywhere in Chile, it’s based on a Lake with stunning mountain scenery in the background.  There were lots of nice coffee shops, bakeries and restaurants and we had a very nice and relaxed day.  It was also valentines day so as a treat I got us take out pizza to have in the room before going to bed early to go hiking again! 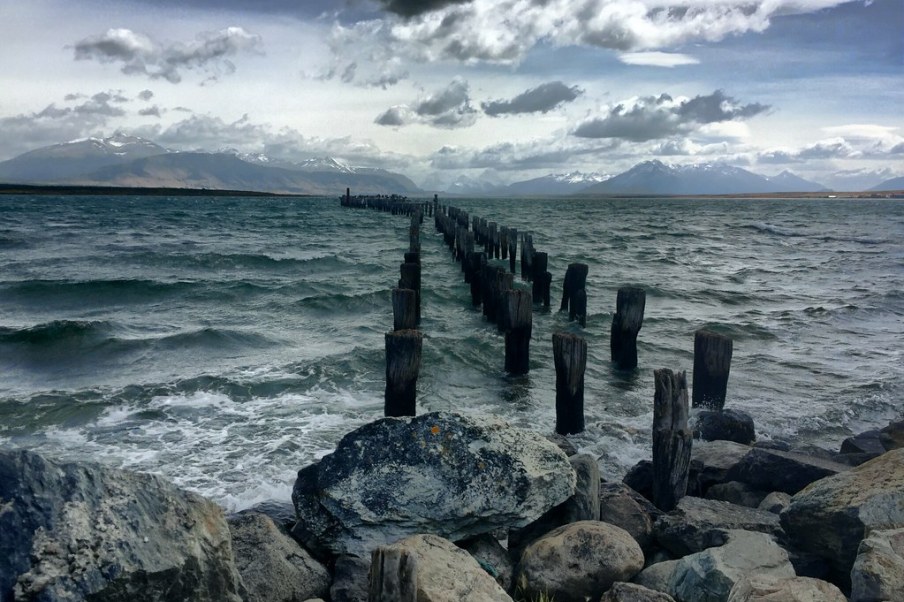 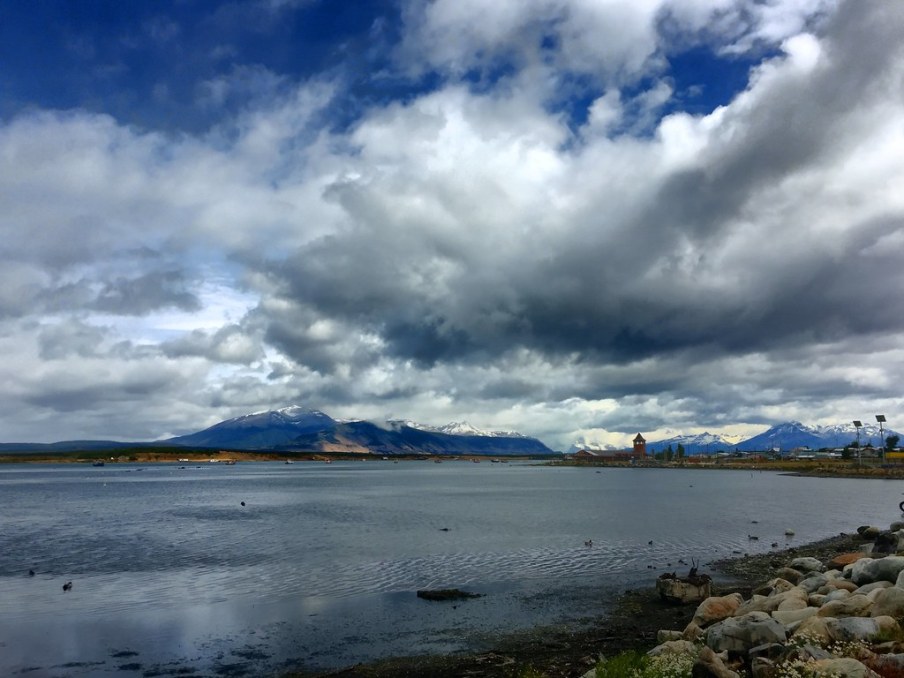 Our second and final day of hiking was a bit of a voyage into the unknown. There was genuinely no information about any other day hikes. If you imagine the W route is in the shape of a W, Las Torres is the right hand part of the W: |||.  We decided to do the bottom part of the right hand side for day 2, as we knew how to get there and I’d found a snippet online to say it was meant to be very nice.  We were pros now too; we managed to skip the queue for buying tickets and get an earlier connecting bus which meant we were hiking by 10:20.

We realised that, if we went fast enough, we could do the entire bottom of the W and get a catamaran back to the bus connection at 6:30.  This was certainly achievable and meant we wouldn’t hike back on ourselves. Unfortunately, the weather had other ideas.  Although it was (mostly) sunny, I’ve never experienced winds like it before; they were strong enough to push a person over (and I fell over a couple of times as a result).  This made it incredibly hard going and meant by the time we reached the mid point we knew we had to turn back- if we’d missed the catamaran we would have been stranded.  To further the fun, Laura twisted her ankle early on which started swelling and causing her a lot of pain.  Although the walk was very pretty, particularly on the way back, it wasn’t the greatest day of hiking we’ve had by some way. 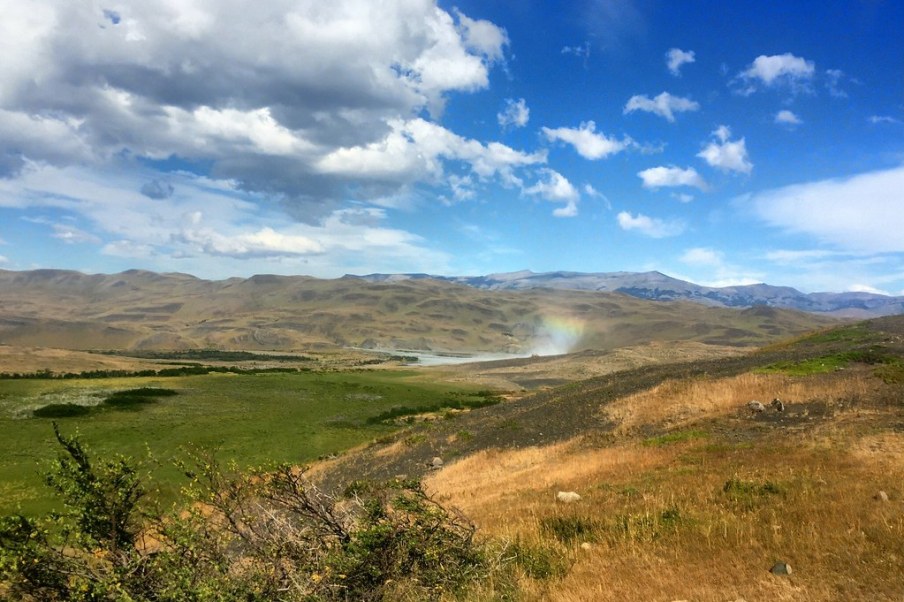 Rainbow from water whipped up from the lake

I really can’t stress how strong the wind was.  Waterfalls were genuinely going backwards as the water was being blown back up at the drop off.  The top layer of water from the lake was constantly being blown into a cloud causing “rainbow lake” (see photos).  And this is how Laura lost her current sunglasses; they were literally blown off her face and down the side of the mountain to never be seen again.  She was holding the big water bottle at the time and couldn’t react fast enough to catch them.  She was understandably disappointed.  Despite this I certainly had a good time, and I think by the end so did Laura.  We were both ecstatic to see the hotel at the end, and the beer tasted excellent again. 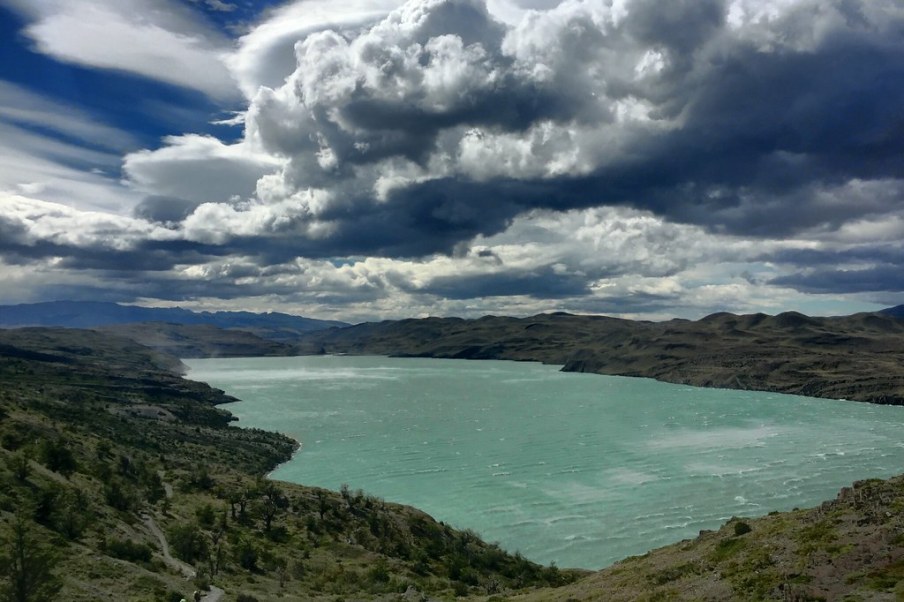 The shuttle back was almost delayed because one of the busses had been blown over (did I mention it was windy?)  The fire brigade (which is entirely volunteer in Chile) had been called, had righted the bus and some people taken to hospital, and they’d sent a replacement shuttle to ferry us back to where the main bus was to collect us.  Although it was now chucking it down with rain the wind had calmed so we felt pretty safe on our journey back! 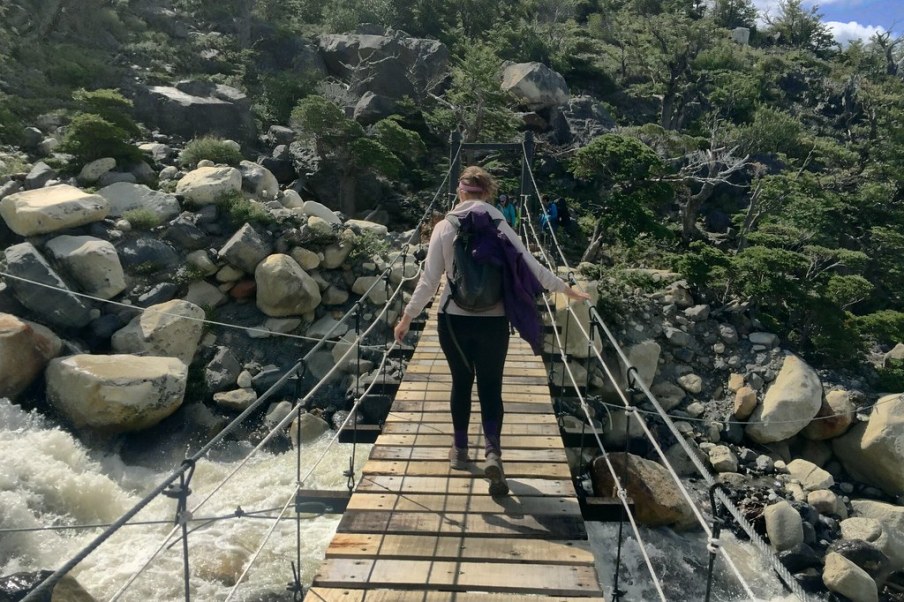 We both agree Torres Del Paine is not the 5th most beautiful place in the world.  We think it’s probably not even the 5th most beautiful place we’ve been to.  It was however still very very nice and we’re both pleased that we’ve come down here.  Patagonia itself is very interesting- it’s so empty! Laura thought it would be barren (wrong) and I thought it would be full of forests (wrong). It’s mostly just shrubbery as far as the eye can see, a few hills here and there, but mostly nothing.  It’s just empty.  We really are in the middle of nowhere. Did I mention we’re less than 800 miles from Antactica? 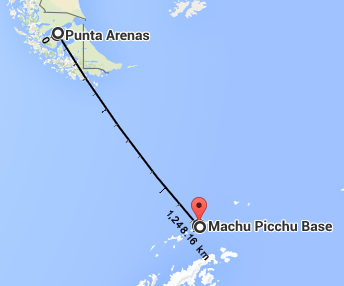 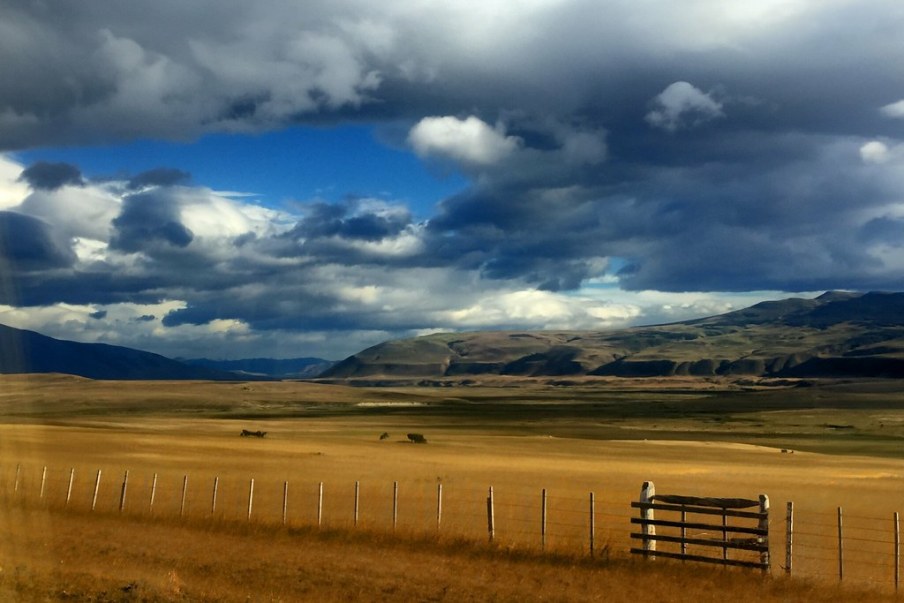 We’re now on our way back up to Punta Arenas for 2 nights.  We’ve chosen a place that is a bit out in the middle of nowhere and has it’s own sauna and log cabins, so this should be interesting!  There’s a naval museum in town which has replicas of the Endurance, the boat Shackleton took to the Antarctic when he and his crew were stranded for over a year, along with the boat that rescued it. And Laura has agreed to come too! I may write the next blogpost too to talk about how brilliant it will be hopefully, although there’s a chance it will all be in Spanish. 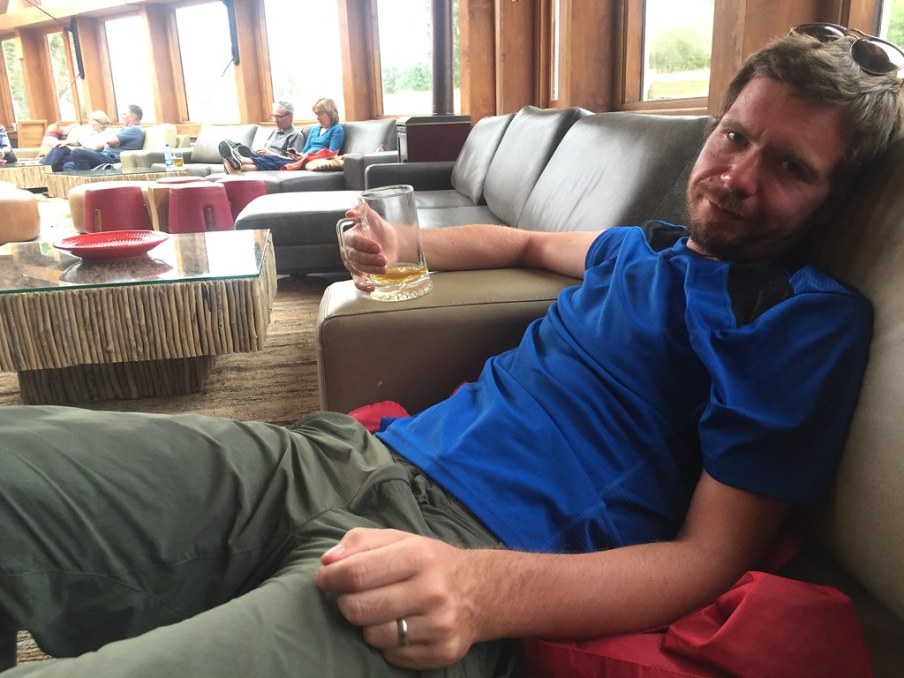