Although it will be met with howls of derision from those of you with real jobs, Laura and I are pretty exhausted from all this travelling.  We’re 9 months in now (and over half way in our South America trip) and the slog of night buses and changing beds is taking its toll.  So, to try and mitigate it we’ve had a rather relaxing week!

As Laura mentioned we weren’t fans of La Paz, but it did pick up a bit with the cable cars. It’s the only city in the world with cable cars as the primary form of transport (I’m full of fascinating knowledge) and they’ve got to be one of the most beautiful commutes to work anywhere.  Plus, each part of the journey only costs 3 Bolivianos (which is about 30p). We spent about 2 quid total riding the whole line for well over an hour! 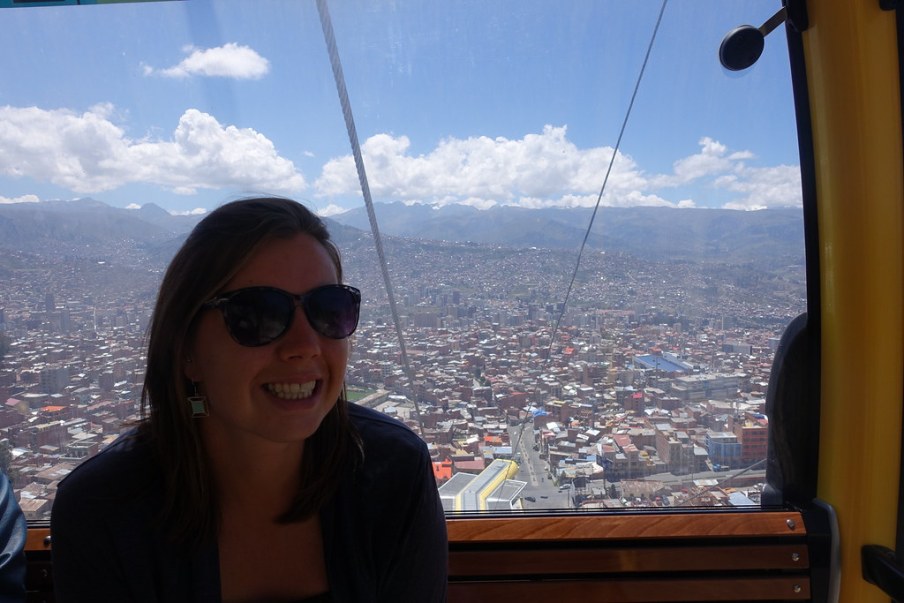 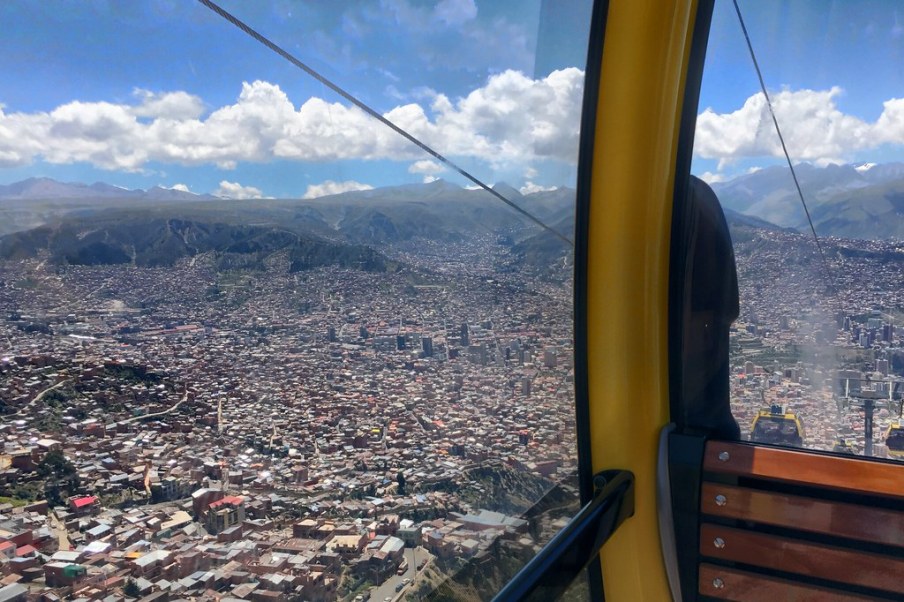 A small section of La Paz

We also found some nice sections of La Paz, the old Colonial bits which were much nicer to walk around and explore.  The apartment we were in was incredible though, and was well stocked with DVDs and we took advantage of having a living room to relax a bit and do some cooking.

Following this we jumped in a cab for about 40 minutes to go and stay in a Teepee! I’m still not sure how Laura found this place but it was very nice.  Quiet and peaceful and with plenty of hammocks around, and a kitchen so that we could cook for ourselves which is always welcome.  We’ve been exceptionally lucky with the weather (seasonally it should be chucking it down, but the El Nino phenomenon means the weather has gone topsy turvy in our favour) which meant we could catch some rays and do some reading.  We also managed a walk to “The Devils Tooth”- great for me as a taxi takes you to the top and then it’s a downhill walk, but Laura wasn’t as keen. The path was quite overgrown, we got lost in places, and there were some parts where the path had split leaving a cavernous gap to be overcome.  We got back safe and sound (if not a little grumpy) though. 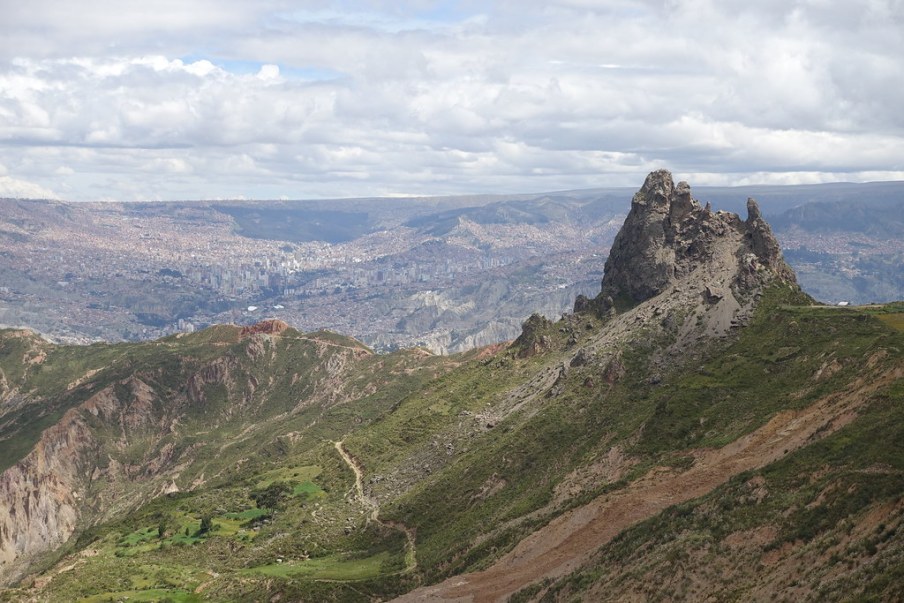 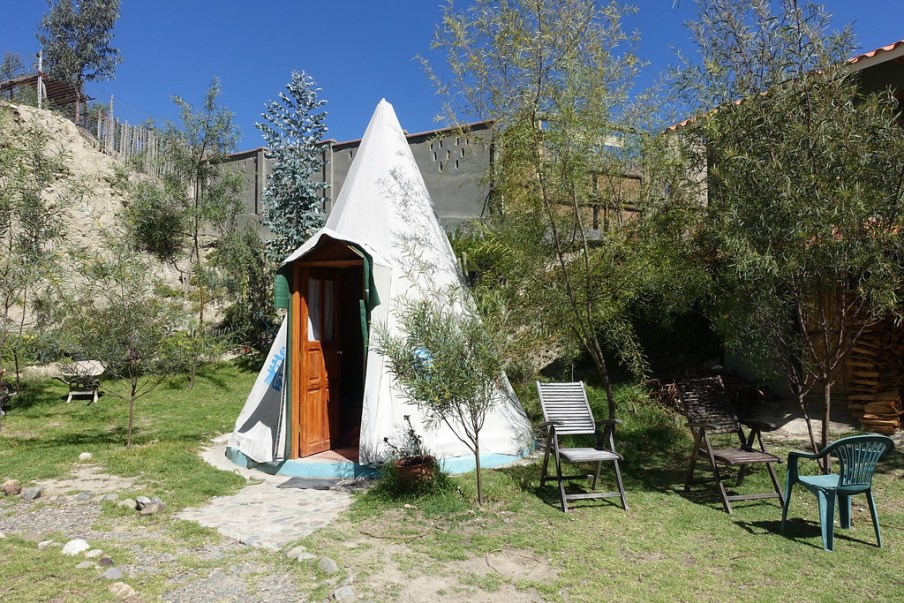 Our teepee, which surprisingly fit a large double bed with space for our bags. Just. 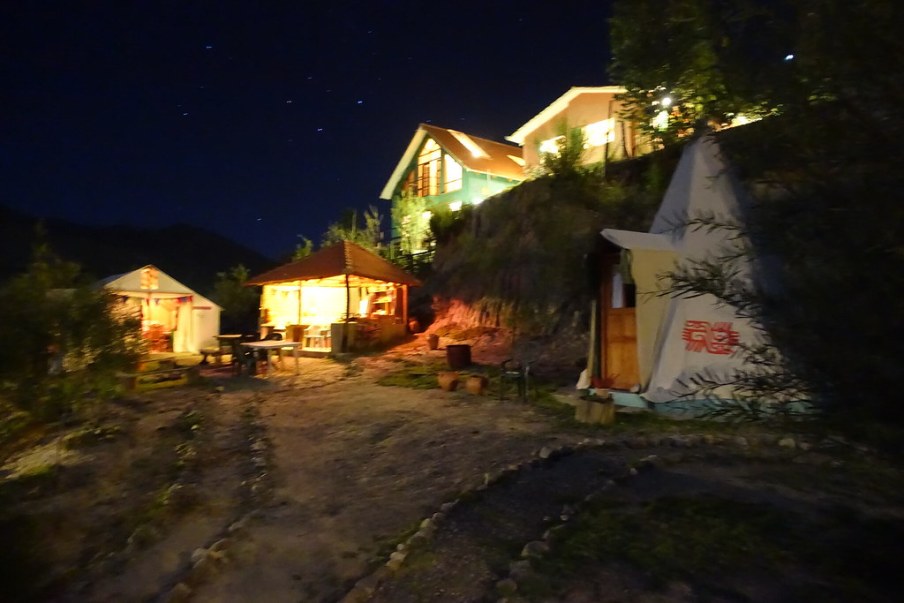 Our next destination was Sucre, which involved another night bus.  We’d splashed out for the Cama seats (“180 recline” my arse) which were relatively nice, however we’d accidentally chosen the seats right next to the stairs which meant I spent the night worrying about people going through our stuff.  We had extra fun as the driver was whipping around corners at incredible speed which at one point sent Laura’s yoga mat torpedoing at the assistant conductors head downstairs. Oblivious Laura slept quite well. I did not.

Fortunately, we had a big treat waiting for us at Sucre.  Our guide book had said that this was the place to splash out as you could do so cheaply and boy, they were right. We went to stay at the number one hotel on Trip Advisor, a luxury place about 40 minutes out of town. It only has 2 rooms and there was no one else staying and we had the place to ourselves! It was built and run by a US/UK couple, Ed and June, who couldn’t have done more to help us out.  June acted as our personal chef and went all out- we got Shepherds Pie on the first night which I was really chuffed by as it’s always the first dish I request when we head back to the UK.  We had a giant room with robes (something me and Laura always love in a posh place,) a huge shower room, a proper bath, and panoramic views of the mountains.  We also had a huge swimming pool and hot tub, along with hammocks to lounge around in.  Best of all they had 2 dogs and a cat who were all really needy which we enjoyed having been so long without pets! 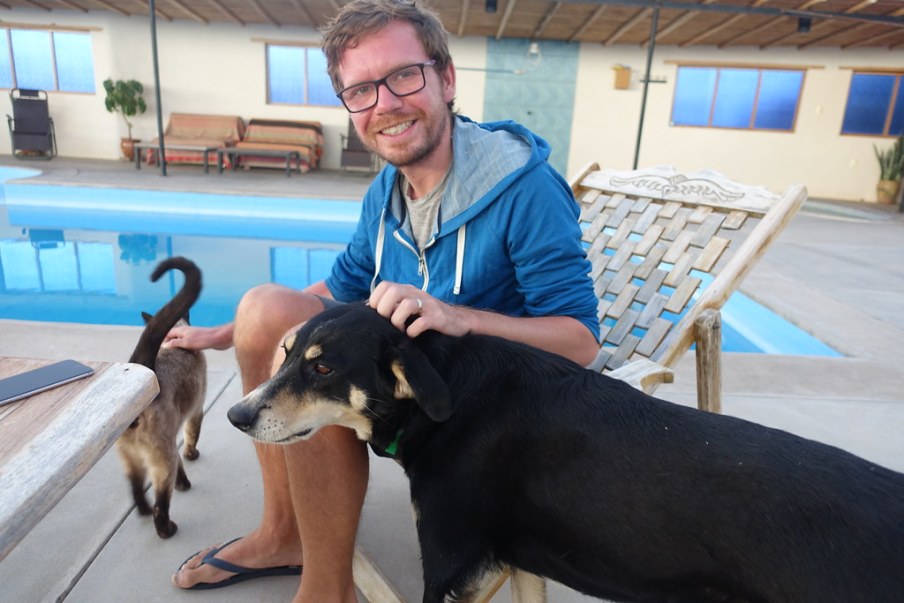 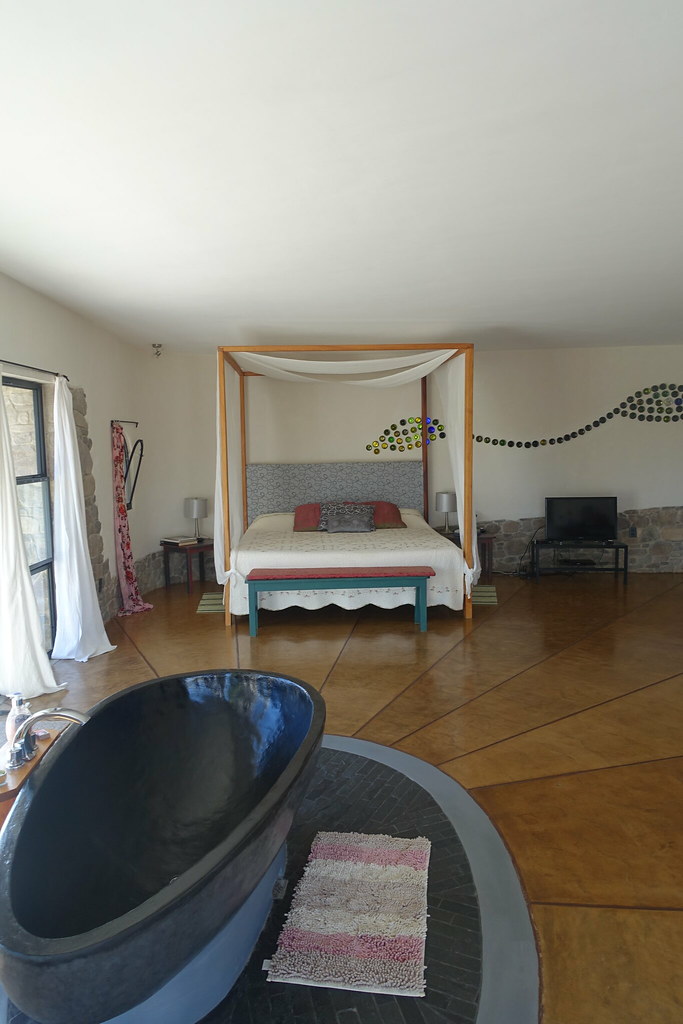 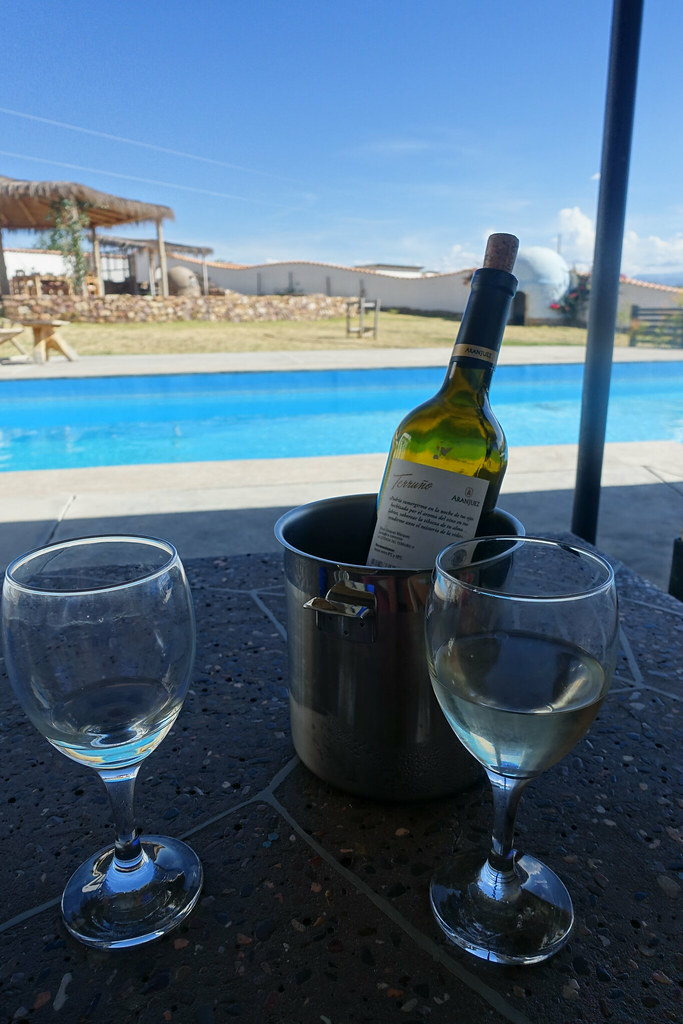 We sunk a few of these

3 days really wasn’t enough but Laura couldn’t be persuaded to stay longer (neither could our budget.)  However all is not lost; we’ve come to the best hotel in town now, which is still cheaper than most of our accommodation in Chile was.  It’s a beautiful old Colonial building and we have views across the whole of the town.  We’re about to go down for breakfast so fingers crossed. 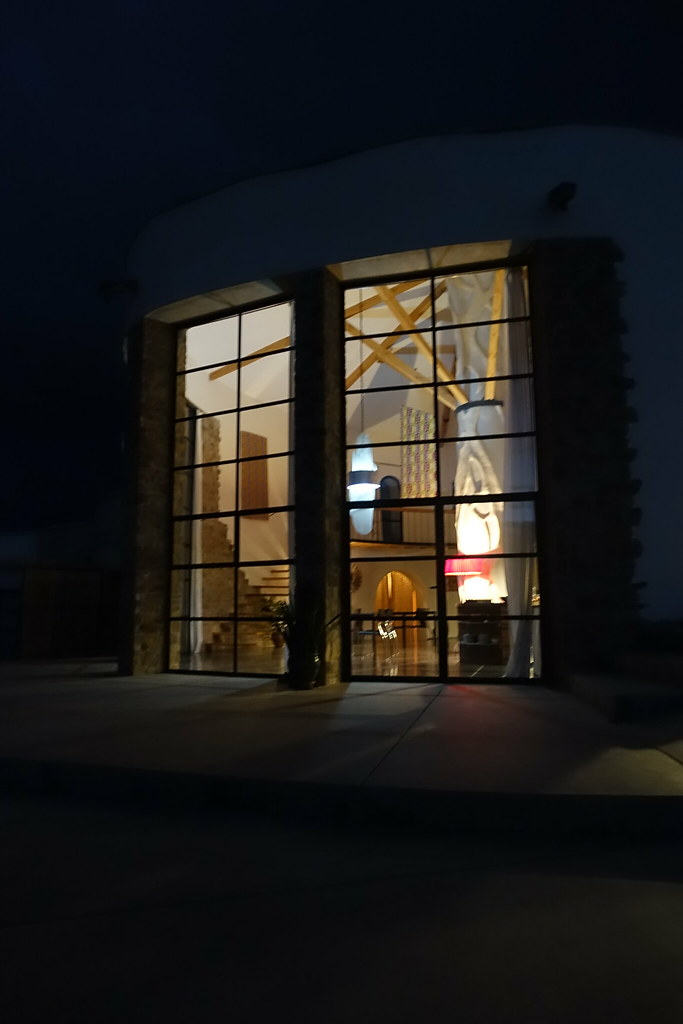 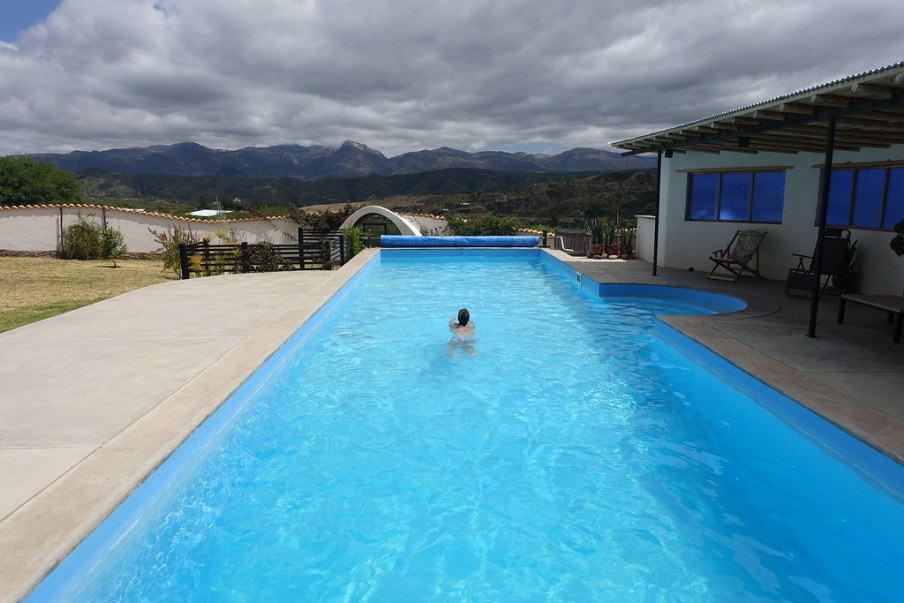 The town itself is a Unesco world heritage site and law specifies all the buildings be whitewashed annually (although the flaking paint and graffiti tell another story.)  It is a compact grid system and very pretty, and as usual with these places it’s packed full of nice churches. We’re here during Easter weekend which is a very big deal over here apparently, so hopefully we’ll see some fiestas whilst we’re around. So far though we’ve discovered that most stuff has been closed, and that was just on a Thursday. Today is the bank holiday so I can imagine there’s going to be even less open.  Hopefully that means more relaxing for me although Laura is keen to get running around again.

The plan today is to go and see dinosaur footprints; Sucre has one of the biggest collections of them in the entire world just out of town.  Should be exciting!