We’re over half way through our travels! How did that happen?

First things first; we’re massively jetlagged. There’s a 16 hour time difference with NZ, and we got to travel over the dateline which was very exciting; we landed in Santiago before our flight even took off.  Doctor Who has nothing on us.  Either way, the time difference has hit us hard. We tend to be ok falling asleep but wake up again at 1:30am, and can’t normally sleep till 5am or so.  It hasn’t been conductive to long days of exploration (we wake up about 11 normally.)  On the plus side, we’re in an AirBnB apartment which has been amazing. We’ve been able to cook (cheap and means we can stay in on an evening) as there’s a kitchen, and it’s a lovely little place which has been nice to chill so we’ve been here a fair amount.

Santiago itself is lovely.  It has a very European feel about it and is quite similar to Barcalona.  It’s in a grid system like NY which makes it easy to navigate around, and it does have an underground system although we’ve only had to use it once as pretty much everything is walking distance.  The weather is consistently in the high 20s and I don’t think we’ve seen a single cloud whilst we’ve been here. 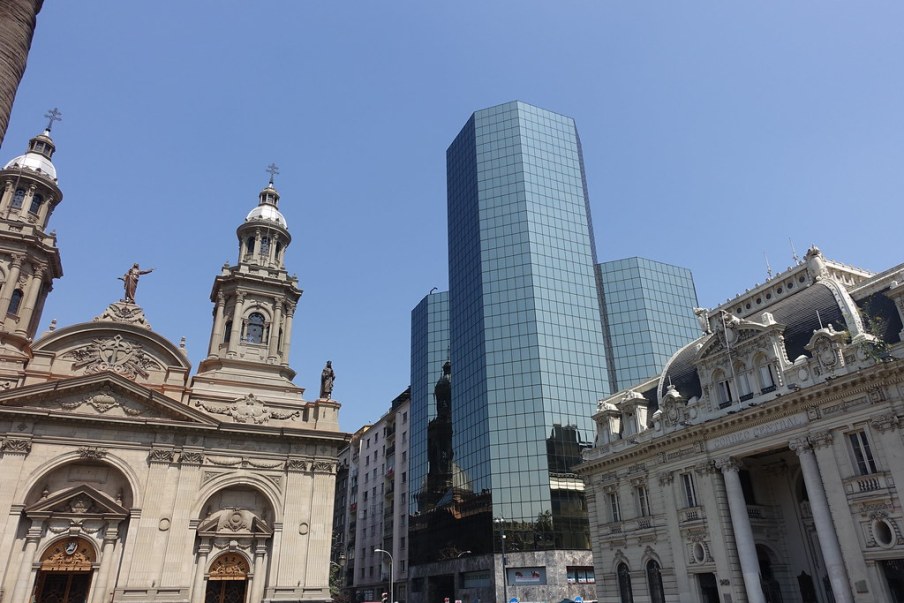 Nice juxtaposition of new and old at the Plaza Del Armas, the main square

One of the main areas we’ve had issues is language. Almost no one speaks English here, which is a brand new concept on our travels.  We’ve managed to struggle through with a mixture of google translate, talking loudly and slowly, and applying the little Spanish we know, but we really need to get better.  Fortunately we’re taking a week to go on a language course next week.  Laura was surprisingly unimpressed that I managed a full conversation with a shopkeeper to get our phones topped up, including real Spanish phrases such as “Quieren Recargas” and managing to say my phone number in Spanish.

The architecture is particularly nice. There’s a wide mix of stuff; a lot of very old church architecture, some very British buildings, and a smattering of brand new skyscrapers.  There’s lots of cobble roads and pedestrian only areas.  There’s also a lot of graffiti, varying from lovely art to ugly tags.  Each road is interesting and different though. 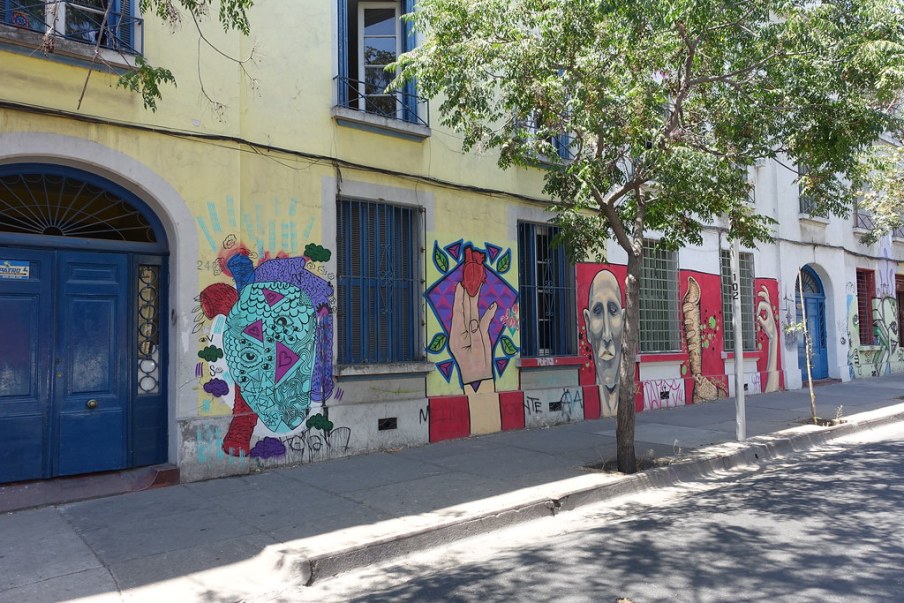 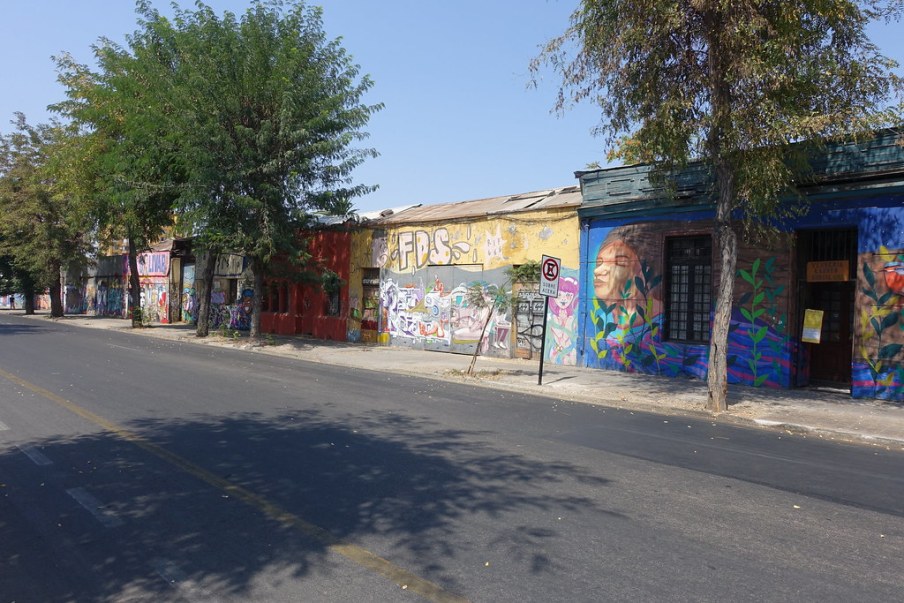 Food has been good so far. We’ve been eating the South American special of Empadanas every day, which are effectively a variation on cornish pasties. They’re delicious, and they only cost 1 pound.  There’s 1000 Chilean Pesos to the pound which makes conversion nice and easy.  Wine is super cheap (3-4 quid a bottle) as is most supermarket food.  Nothing has seemed too pricey yet other than accommodation which bodes well. 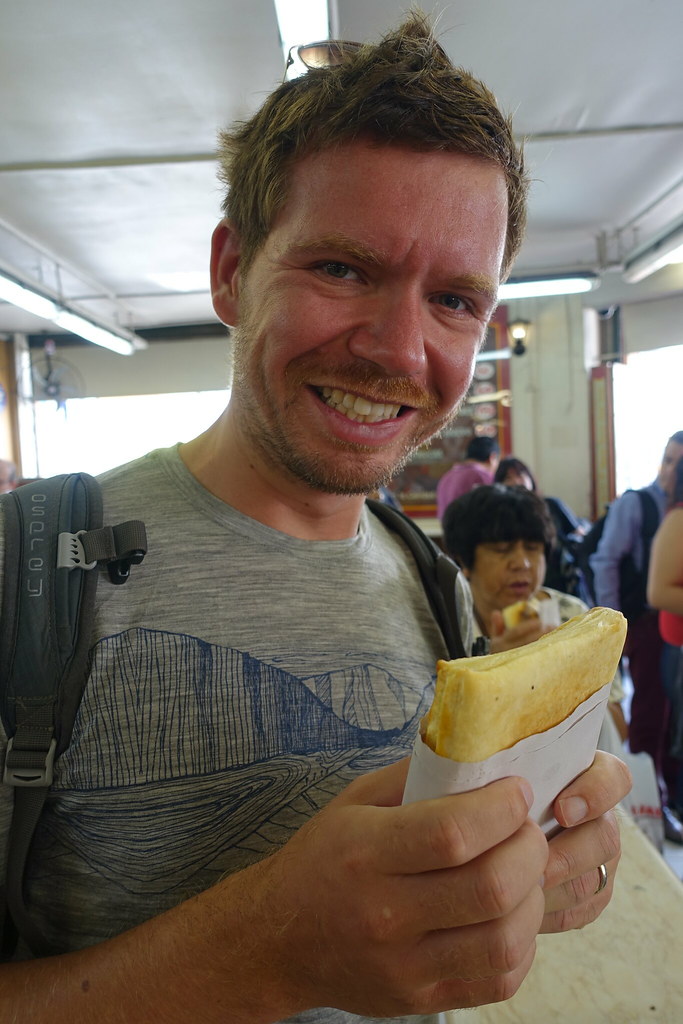 Very Jetlagged but happily with Cheese and Pastry

We spent yesterday at the museum of memories, dedicated to remembering what happened during the regime of Augusto Pinochet.  Some terrible atrocities occurred, but it was a very interesting museum and even managed to keep Laura engaged for 4 hours. 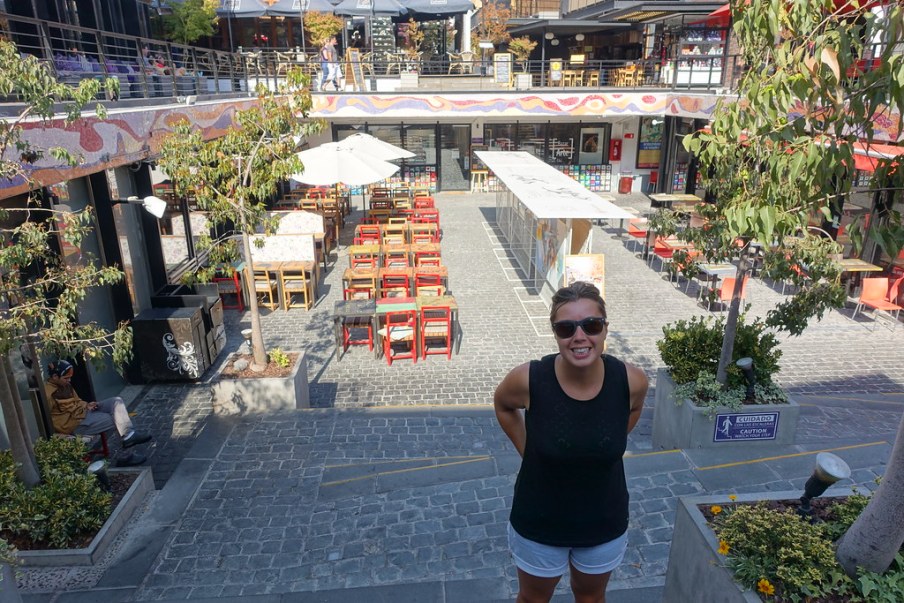 Laura in the lovely Bella Vista area of Santiago, full of nice restaurants and coffee places

Today we went up Cerro San Cristobal (literally, San Cristobal Hill.) Most of Santiago is flat, except for a couple of big hills (outcrops of the near by Andes.) At the top of the hill (a 300m climb) is a statue of the Blessed Virgin Mary which looks out over the city.  It was a hard slog as we had to go during the peak heat of the day (damn jetlag!) but there were incredible views all around the city. It’s absolutely massive!

It’s only half 6 but we’re already in Pyjamas ready to fall asleep, hopefully.  Tomorrow we must leave the Sanctuary of our flat to go to Valparaiso, about an hour and a half west of Santiago on the coast.  May the adventure continue!