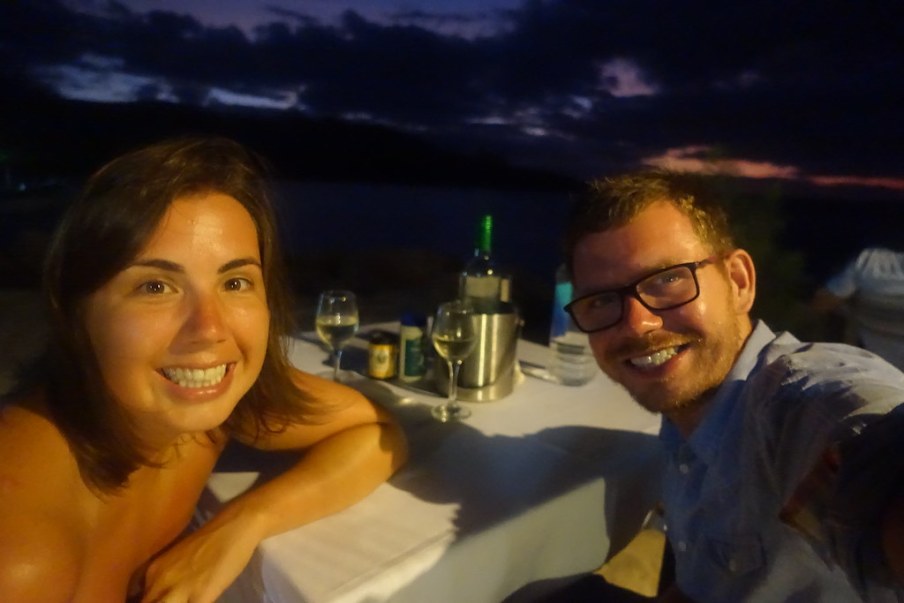 There’s a cyclone somewhere in the vicinity of Fiji and so the weather has been all over the place the past few days- today it’s been so windy that the boats have had to be pulled onto shore and the big water taxi that ferries everyone around the islands couldn’t park on this side of the island as the water is so choppy. All diving, snorkelling and kayaking has been cancelled and together with the fact that last night was NYE, everyone’s looking a bit miserable today. Not us though! We’re really happy there’s no sun so that we feel absolutely no guilt in lying in bed all day, post booze hangover in full force.

For NYE, we’re at Octopus Resort on Waya Island. We were here 4 years ago, to engaged and met some great people so we thought we’d come back whilst we’re in the area. Not that much seems to have changed- it’s a teeny bit bigger but not so much that the feel of the place has changed. They do have an awesome new spa and yoga deck, which I’ve loved, so much so I’ve been doing 2 classes a day. Not today though- things got a little out of control last night and at some point I fell over and am pretty sure I’ve sprained some part of my arm. There’s no doctor on this island though so I guess I’ll have to wait until the mainland on Sunday and if it’s still as painful, go find some help!

NYE in Fiji was lots of fun. A band was brought over from the main island and they played terrible covers and then a few of us decided a pool party was in order so in we all went. There were free shots, lots of rum, awesome food, great people and general good times.

Before we arrived at Octopus, we stayed at Barefoot Manta, in a very glamorous tent disguised as a bure: 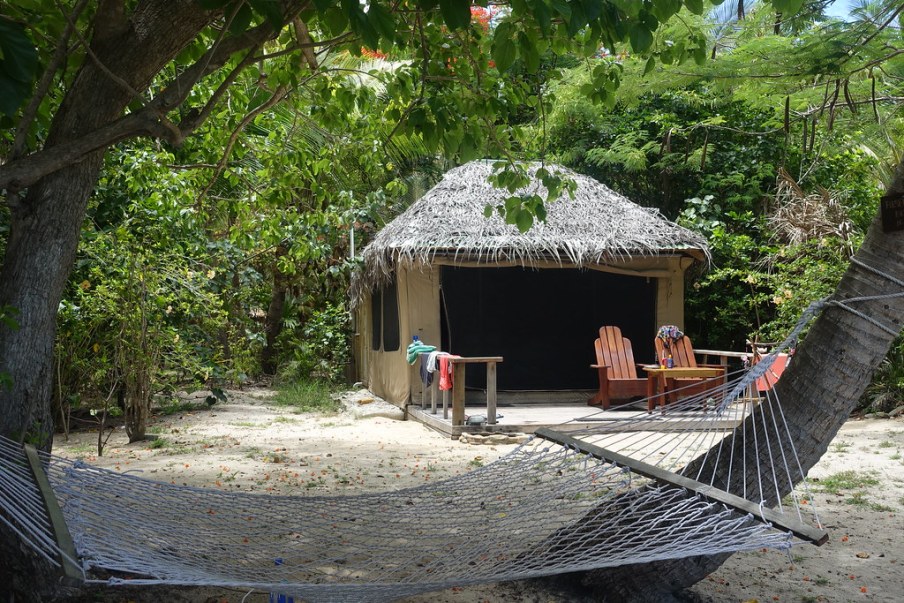 We hadn’t actually realised this is what we’d booked and initially we were a bit concerned as there were no doors, locks etc, just a zip up net at the front and then at the back, (which led to a gorgeous open bathroom.) However the view on a morning was amazing and it was so private. We did manage to lose a precious bottle of sun cream from the deck but whilst Sam reckons someone stole it, I think a cheeky little animal took it away. 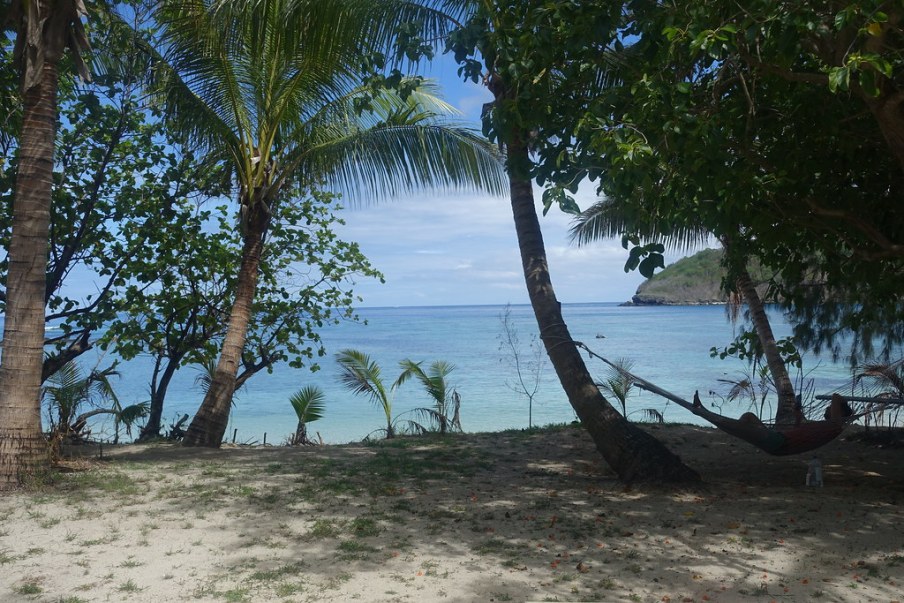 The reason that we’d booked Barefoot Manta was because it’s a prime manta ray location and we wanted to snorkel/dive with them. However, I didn’t quite realise (until I’d booked and paid) that it’s the wrong season for them, so it kind of defeated the object of going there. It was a beautiful place, with a great dive school but there were quite a few things that let it down- food was average even though the restaurant was stunning (top photo is of our table there- amazing sunsets every night.) Some of the staff were lovely and went out of their way to help, but some were plain rude and it has really put us off recommending it to others.

We did manage to do a couple of great dives though- one in particular was fab and went through loads of underwater caves. On one dive we saw a ginormous reef shark- I’d told the dive master about my (irrational) fear of sharks but down at 22m there’s not much you can do. He tried to get me to go and touch it, but I’m a child of the Jaws generation and that plastic shark has  taught me to fear them so I refused to swim down with him. It’s strange though because we snorkelled with loads of reef sharks in the Maldives and I was fine, but there’s just something about being so far down and coming face to face with one that scares me. 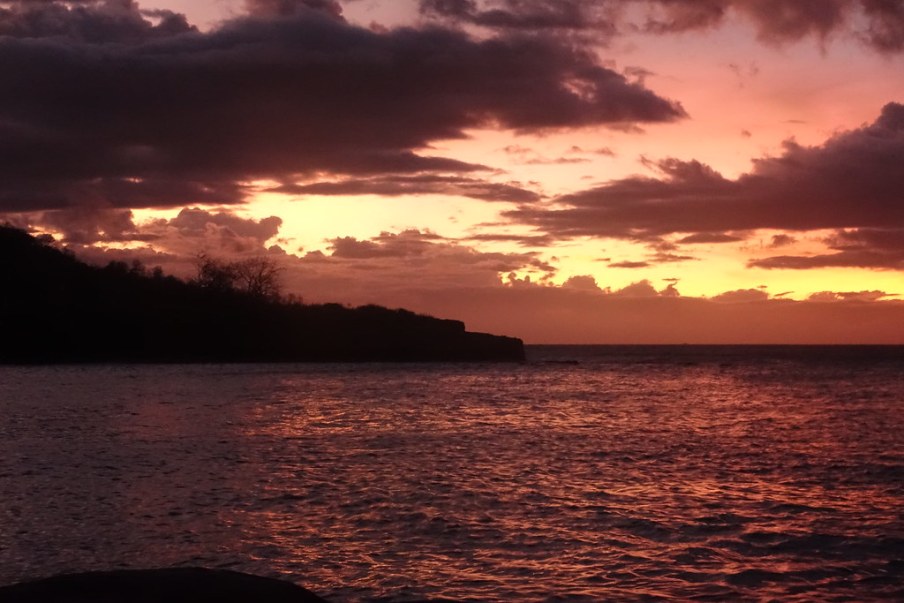 Tomorrow we’ll (reluctantly) leave the Yasawa Islands and travel back to Nadi on the mainland. We’ll stay there 1 night and then catch a bus early sunday morning to…..who knows? We were going to go to Suva, the capital of Fiji, but looking through our guidebook we read about a great place called Pacific Harbour, which is on the road to Suva. From there, there’s supposed to some great kayaking along the river (well, that’s what our book has told us- we’re back to a Lonely Planet one though so who knows, it could be rubbish.)