NZ, you may well have taken the spot for our most favourite country….big statement but I feel it’s worth it.  The longer we spend here, the more we seem to love it (don’t worry Mum, we WILL NOT be moving here. There’s too many sheep and the flight was horrible.) And we haven’t even gotten to the south island yet…..

We’ve travelled from the Bay of Islands (highly recommend) over to the Kauri Forests, which were amazing- there was practically noone there (tourists or locals) and loads of awesome windy roads for me to drive round (and for Sam to hold on tight- he seems to hate my driving for some reason. It could very well be something to do with the fact that I reversed straight into a picnic bench this week. Oops.) From there we travelled down past Auckland to Hamilton for lunch with one of Sam’s friends. The onwards to Rotarua, which is a geothermal hub.  Apparently, they’re a big deal and we didn’t really realise until we got here. The rotten egg smell is everywhere but you get used to it after a while. We went to some hot springs and DID NOT want to leave (mainly due to the freezing temperatures outside) but they also had amazing showers. 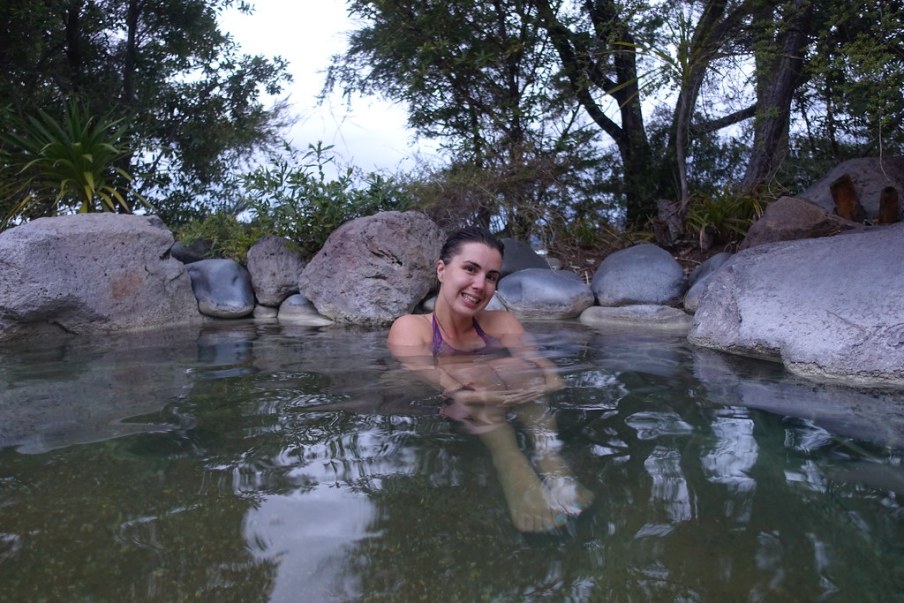 There’s loads of geothermal ‘parks,’ we visited ‘Wai-O-Tapu’ which was fantastic. Check out this geyser, which spontaeously explodes with boiling hot water. AMAZING! 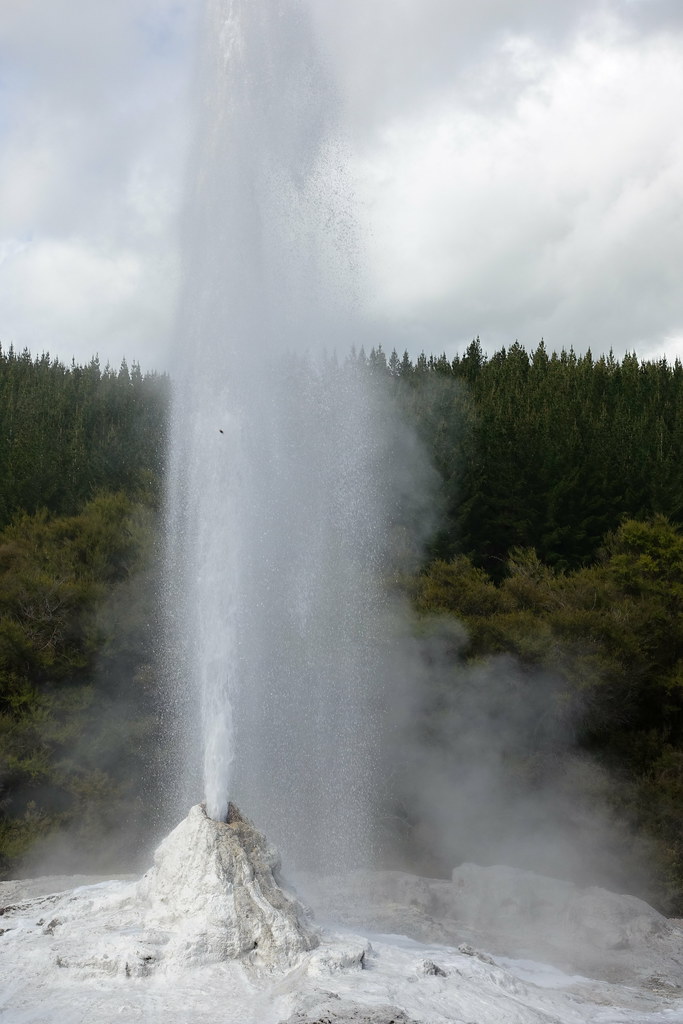 Showers are something I’m really struggling with, or more specifically, the cleanliness of showers. I have no problem with cold showers (unlike Sam) but I really really hate dirty showers. Every shower I go in, I feel like I need to wash it down first. Maybe I just need to lower my standards. Maybe. Maybe I’ll just continue washing them down,

This week we’ve fulfilled Sam’s one requirement for coming to NZ- visiting Hobbtion. Now, I’m not a LOTR geek at all (I didn’t even make it through most of the films) but it was pretty cool to see the set. Sam was in his element. There’s so many photos on our camera of him grinning insanely next to a hobbit hole. See below for one of many: 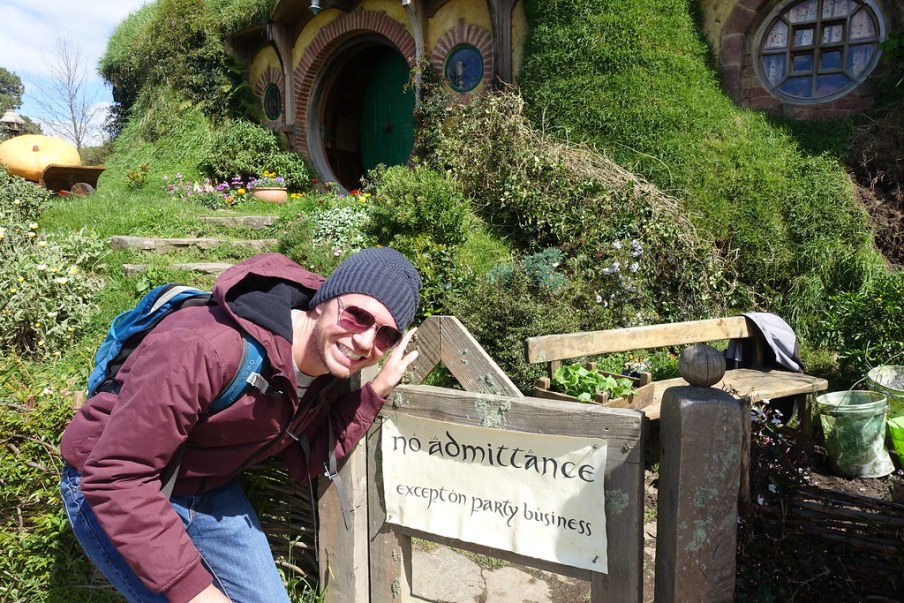 Apparently the tour record for photos is 3440. I think the American tourists with us might have taken more. I kept huffing and puffing and sighing to get past them, “ooh it’s a small bench, let’s take a photo,” “wow, a field. Selfie time,” “ The house where Peter Jackson stayed! Wow! Gotta get a snap.” MOVE ALONG, PEOPLE. The only issue I had is that we were herded around like sheep, which I get because it’s a huge tourist attraction, but it was still annoying. Kept wanting to punch anyone who got out their selfie stick and stopped right in front of me. There’s probably hundreds of selfie photos with me scowling in the background. Apologies to anyone who has a stick but seriously, WHY?? Sam bought me one once. I promptly gave it away.

Every day is busy busy, I think all Sam wants to do is chill outside with his kindle but I keep finding stuff for us to do. Take our time at Lake Taupo as an example. This is an extraordinarily beautiful spot, with the lake being the size of Singapore. 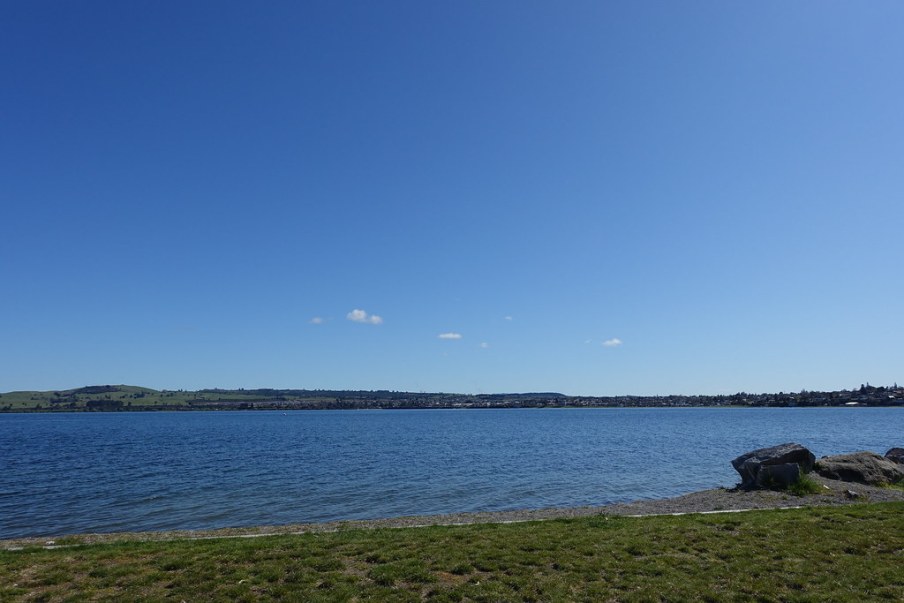 In the past 3 days we’ve been hiking, cycling (me excitedly, Sam reluctantly) and kayaking. It’s just that there’s so much to see and so many things to do, I think I have FOMO. We met a girl in the hot springs, who put it well: “You have 3 months. Slow down.”

Duly noted.Today we’re off to Hawkes Bay aka the start of wine country, YIPPEE!