So here we are in the Colchagua Valley, Central Chile. On Friday we left Vina (along with our certificates for having completed our Espanol classes) but perhaps unsurprisingly, we’re not fluent in Espanol yet. We are much much better than we were, to the point we can get by and have a conversation with someone but a lot of the time we have to pick out key words/phrases and try to figure out from that. 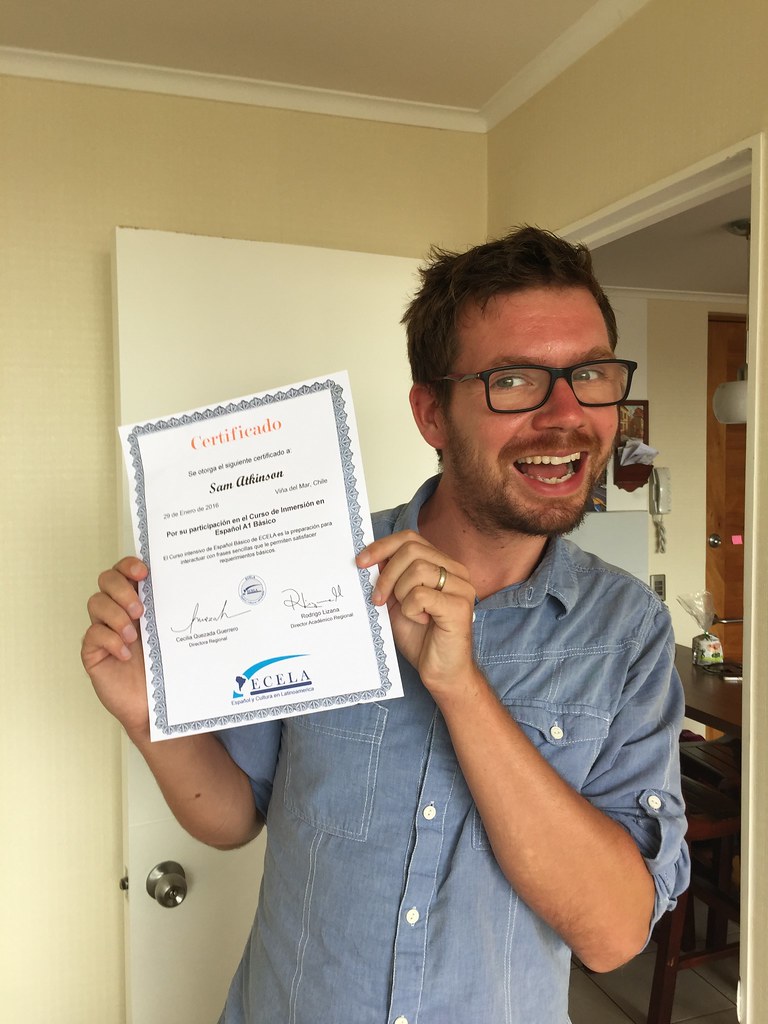 After a quick 1 night stopover in Santiago, we took a bus to Santa Cruz, a sleepy town 3 and a half hours south, in the Central Valley. This is famous wine country area and we were eager to get going!

After wandering around aimlessly looking for another bus (seemingly being the only tourists in town,) we eventually found a bus station with a bus that could take us to the tiny village of Chomadahue, where we’re staying in a lovely casa, with a pool and bbq. The owners don’t speak any Ingles, but luckily their daughter was nearby and could translate-ish. After some google translating, we managed to ask them where we could rent bikes to visit the vineyards in the area. Un problemo- no bike hire. Taxi then? Ah, no. Oh dear. But then…..the owner’s son offered to take us wherever we needed to go for half the price of a taxi. Yippee! The only reason we’ve come here is to visit the vineyards and so if we hadn’t have been able to go, we would have been gutted.

Visiting a vineyard here is much more of an event than in NZ. We had to reserve a week in advance and it’s also much pricier, but for that you do get a lot for your money.The vineyards are MASSIVE so getting from one to another would probably have been a bit of a nightmare on bikes in the heat.

First we visited ‘Montes,’ where we were taken on a private hike an hour and a half up through the vineyards to the top of a mountain. Well, almost. We realised quickly why noone else was on the hike with us. It was so hot we couldn’t make it to the top- around 37 degrees. Amazing views though. 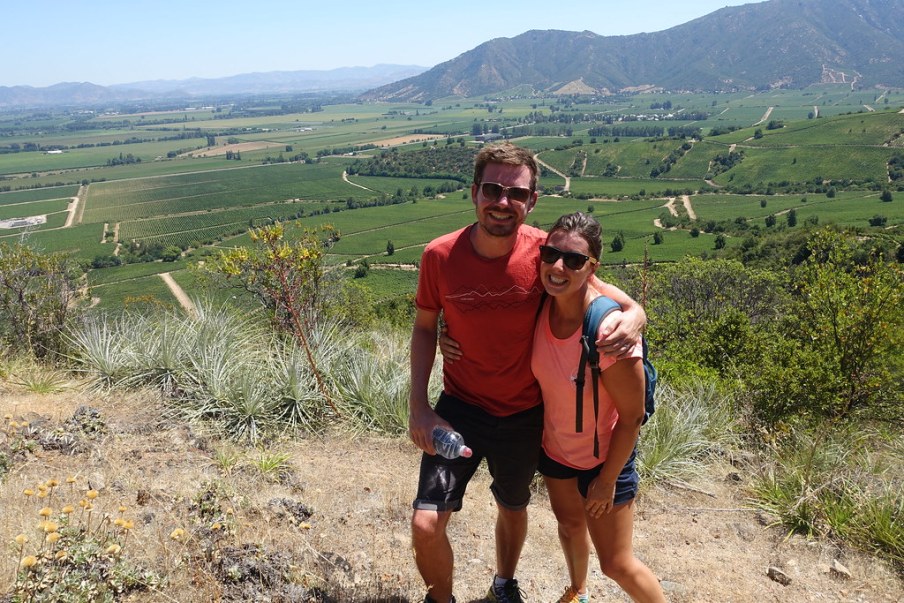 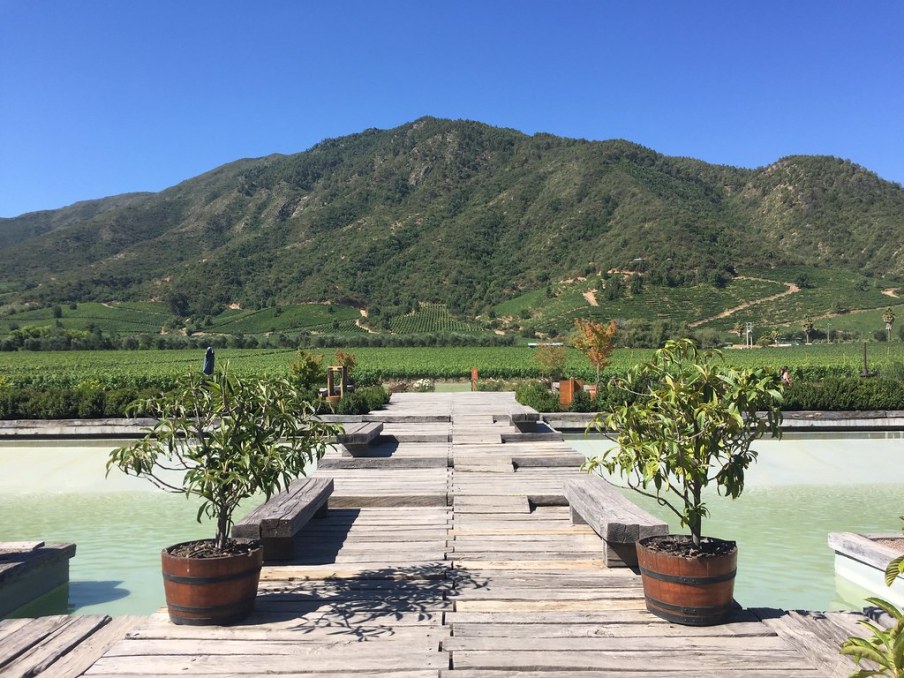 The view from Montes looking out over its vineyards

We then had a visit to the barrel room, which was incredible. Weirdly, they play gregorian chanting constantly in there as Montes believes the vibrations ‘change the wine on a molecular level.’ Hhhmm. Really? Well whatever the reason, the wine was excellent and came with a cheeseboard- that’s a way to win us over for sure.

We also took a trip to Clos Apalta, which was visually STUNNING. It’s owned by the same people who own Gran Marnier. The attention to detail on the architecture was amazing- everything had been built for a specific reason and had a function. It felt like something from 007. 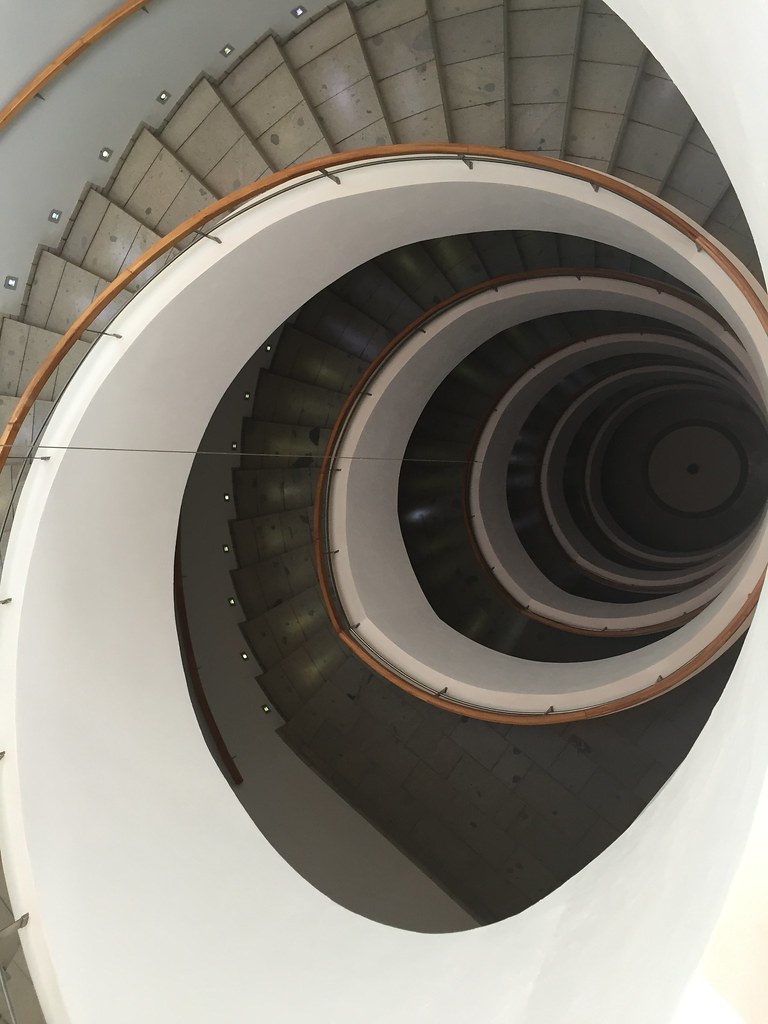 Each level leads to a different part of the process- fermenting room, 1st year barrels, 2nd year barrels and tasting room/cellar at the bottom. The central staircase is supposed to resemble the swirling of wine in your glass!

The tour was excellent and we got to see exactly how they make their premium wine. I think for both of us though, the highlight here was the tasting room, which also doubles up as the second year barrel room. Once we got to the tasting table, we could see steps leading down under it. It turns out that this leads to the owner’s PRIVATE CELLAR- how cool is that?! Over 6000 bottles down there- unsurprisingly we weren’t allowed down to see it properly. 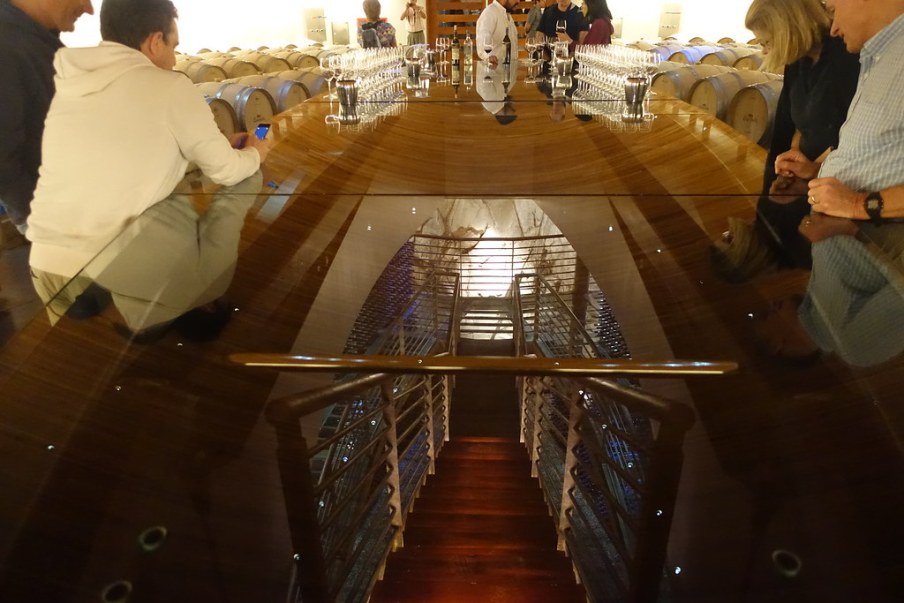 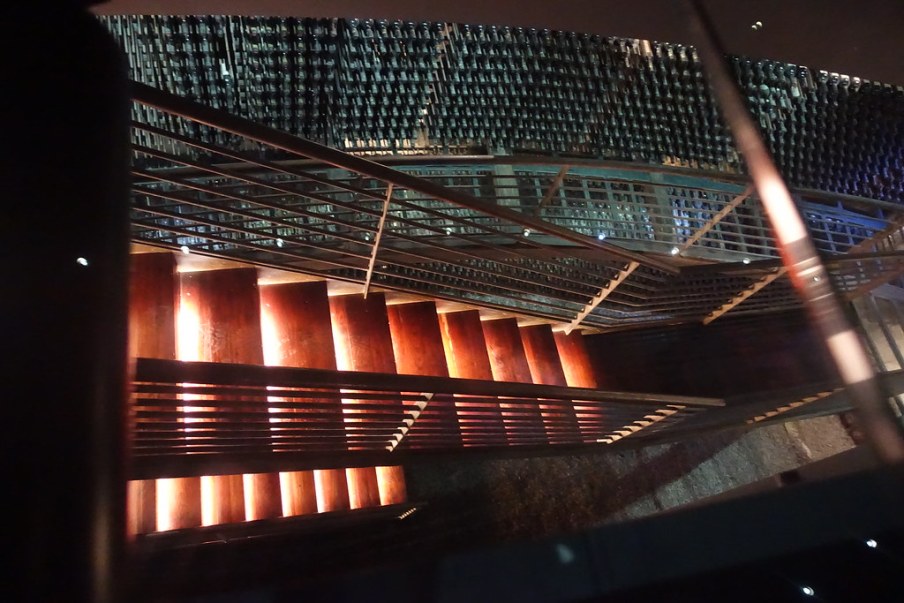 This winery has a small hotel attached to it- but with prices starting at 450 gbp per night, I think it’s a little out of our price range……..

The final vineyard we went to was MontGras- one of the more well known in Chile. Here, we had a private tour of the vineyard followed by a trip into see how the wine is mass produced as well as tasting the wine straight from the vat- very cool. The only reason we got this private tour is because we seem to be some of the only people who need a Ingles speaking guide- all of the other tours in Espanol had at least 10 people on them! 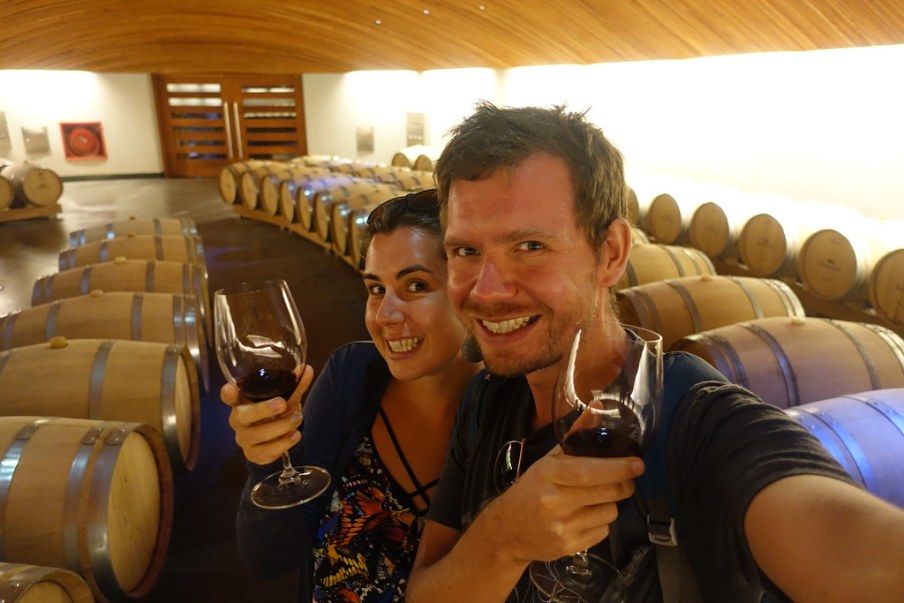 We then got to the really fun part- making our own wine. As the Colchagua Valley has a very hot climate, every vineyard specialises in red wine so we were given the Reserve Merlot, Cabanet Sauvignon and a chilean special the Carmenere. We had to blend them together to create our own wine, which we then bottled, corked and brought home! At each vineyard, we could have as much wine as we wanted- we had to restrain ourselves for fear of keeling over mid afternoon! 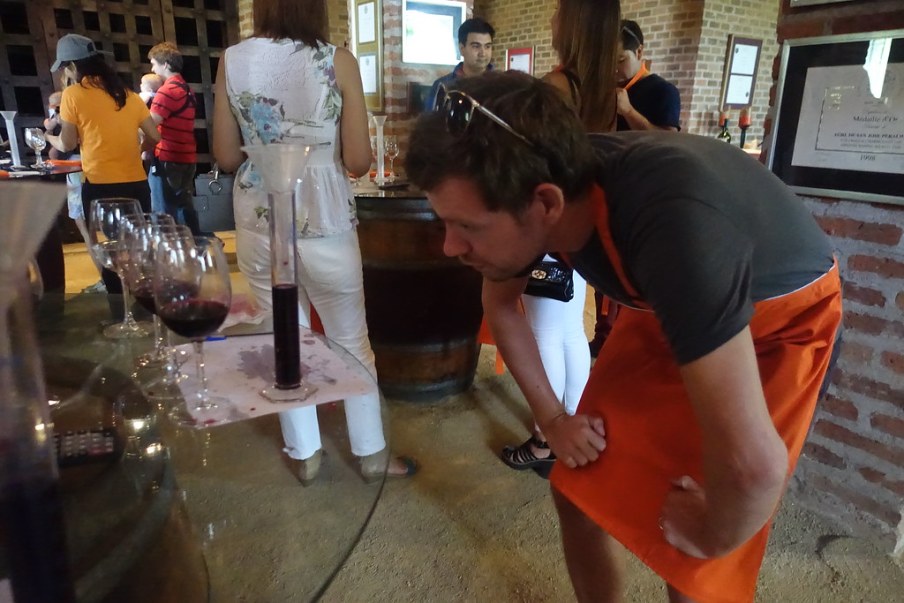 Which blend will he go for? 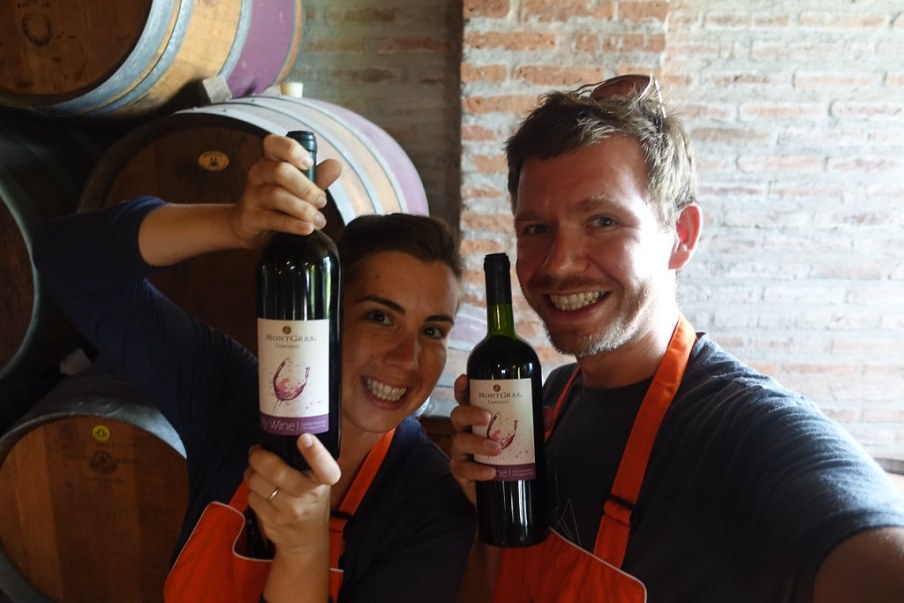 All in all,  an excellent weekend’s work.

Tomorrow we (begrudgingly) leave vino central to head down to San Clemente, another tiny town. We’re going to spend a couple days hiking in the Reserva Nacional Altos del Lircay (a big national park) before hopefully heading down to the Lakes District and onto Pucon, apparently the adventure capital of Chile. From there we’ll head down towards Puetro Montt to catch our flight to Patagonia (woohoooooo!) VERY VERY excited about this.