It’s been a great week for me, as we’ve done almost zero walking! I think when I said to Laura that I was “done with walking” she thought I’d finally cracked, so instead we’ve had a rather relaxing time of late, in preparation for a lot of relaxing whilst we’re in Fiji.

After the very enjoyable Cathedral Cove and Hot Water Beach we headed all the way up to the peninsula’s main town, Coromandel Town.  We thought there’d be more there, but to be honest it was just an average small town (although I did get an exceptionally good Hot Chocolate, made with hot milk and a stick of chocolate in it melting. Yum.) There really isn’t much in the Coromandel at all in the way of towns and stuff, but there’s lots of nice views and beaches.

We’d originally planned to stay up there for a night but as there didn’t seem to be much there we decided to head back down to Whitianga, but not before visiting The Waterworks, a weird but very fun activity water park (that’s the best I can describe it). It had a ton of interactive things, normally made of recycled car parts, which usually involved playing with water.  There were bicycle water guns, trick showers that soaked whoever was pumping the water (me!), boat racing and much more. It’s really hard to describe, but we had a lot of fun. 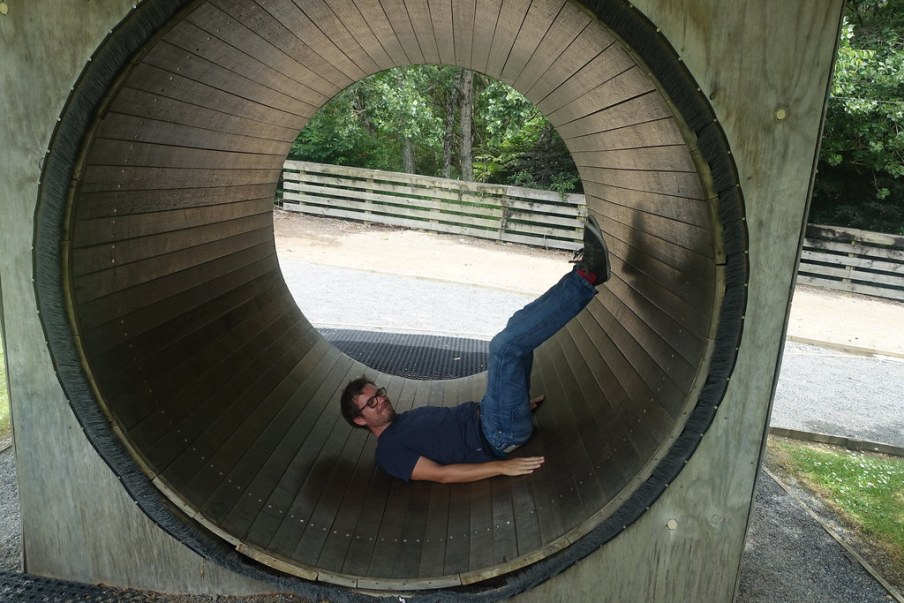 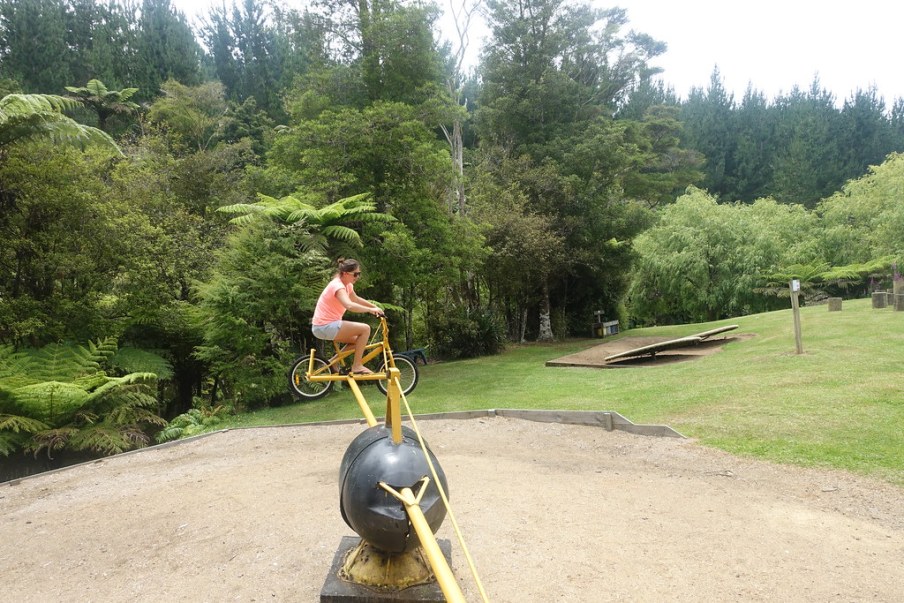 As if the day wasn’t already fun enough, Laura then suggested we go play mini golf! She knows I love mini golf, and this is only the second time in the trip we’ve gone.  It was an absolutely excellent course.  For those wondering, Laura was leading in the 9th but I came back with gusto to win by about 4 shots (although I almost bottled it on the last hole). 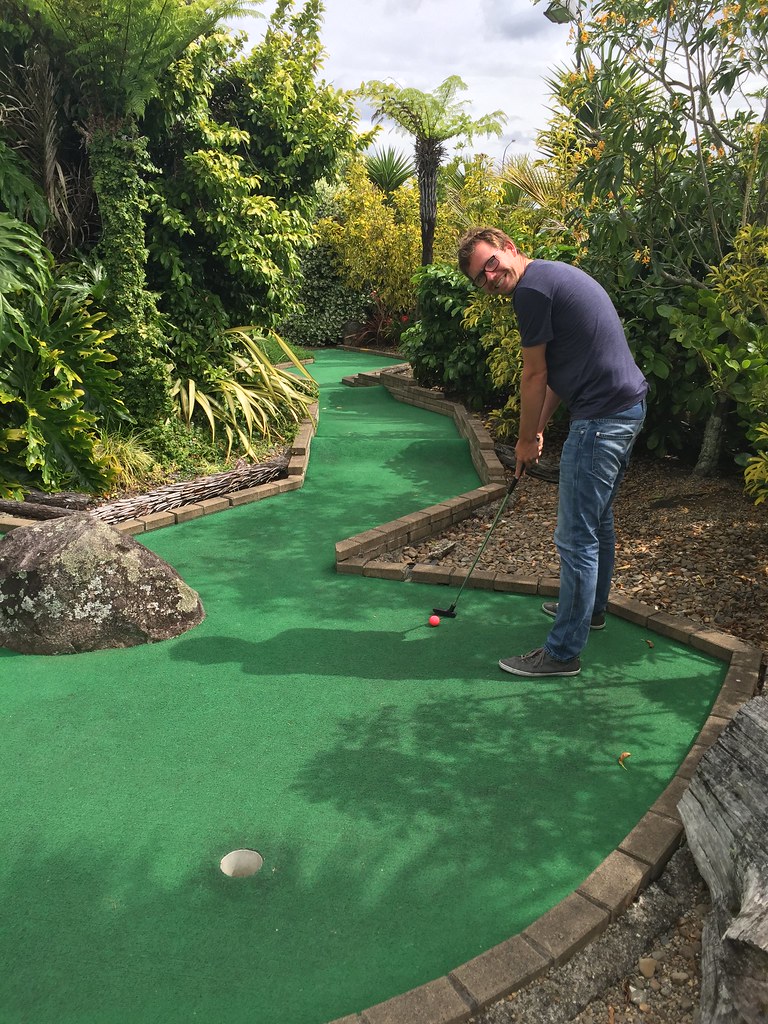 After these antics were complete, we headed to Whitianga, a lovely little seaside town on the east coast of the Coromandel.  On the first night we went for a lovely meal by the docks with lots of wine and beer and just had a really nice night.

The next day we wanted to find a beach. Whitianga isn’t actually that far from Hot Water Beach (10km), there’s just a lot of water in the way which means to drive involves going the long way round and Vanatar guzzling extra fuel.  There’s a local passenger ferry that continually goes from one side of the estuary to the other which we’d heard about, so decided to take as there were meant to be nice beaches on the other side.  We were ecstatic to discover that the cost of the ferry ($12 total, about 5 quid) included a free coffee or tea at a local coffee shop on the other side! Worth it for that alone.  The coffee shop was about a 20 minute walk but was a really nice, locally run shop which served excellent chocolate Baileys cake.  A little beyond that we found Cooks Beach, a beautiful long sandy beach which had about 4 other people on it for the whole length.  There were nice big waves to jump around in and we brought lunch and kindles and made a really nice day of it. 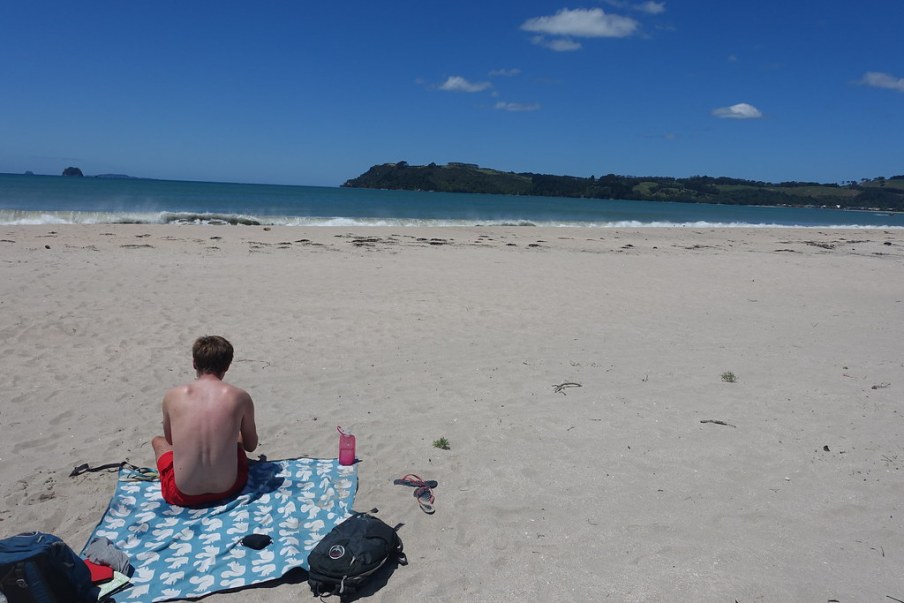 We enjoyed it so much that the next day we caught the ferry again, got another free coffee, before this time heading past the beach to Mecury Bay Estate- that’s right, we were back on the vineyards! Well, vineyard singular, as it’s the only one in the region.  Although it was an hour walk from the ferry it was worth it, as the wine was lovely and the platter delicious. The walk back seemed much quicker after tasting 5 wines and drinking 2 bottles :). 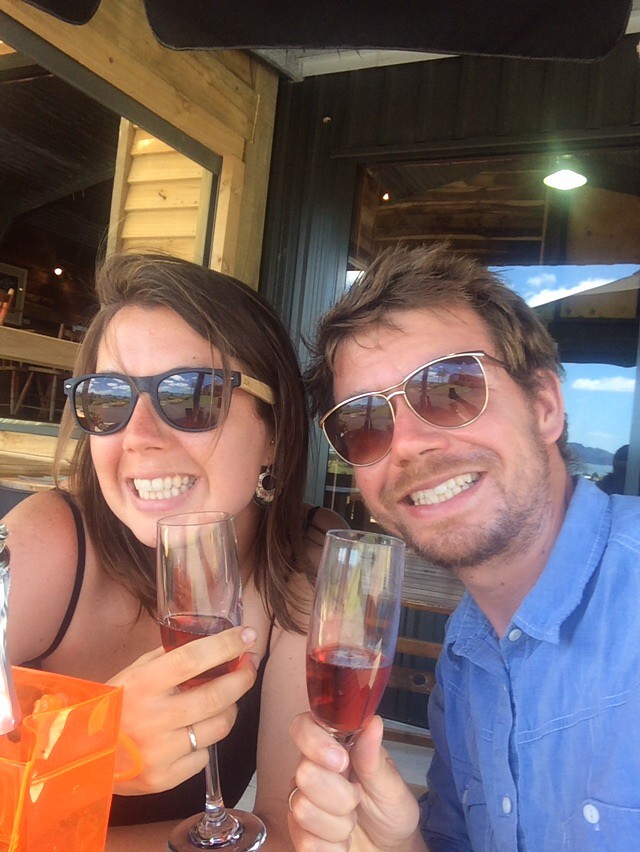 Before calling it a day in Whitianga there was only one thing left to do; “The Lost Springs”.  Not quite as dramatic as it sounds, it’s another set of thermal hot pools.  Although a tad on the pricey side, we got a day pass and got to spend the day sitting in nice hot geothermal water of different temperatures and sunbathing (I managed to burn. Oops.) Exceptionally relaxing and a great way to cap off a few lovely days.

Unsurprisingly we’re now back on the walking, but I’ll let Laura tell you about that in the next post