Adventures in the Amazon! 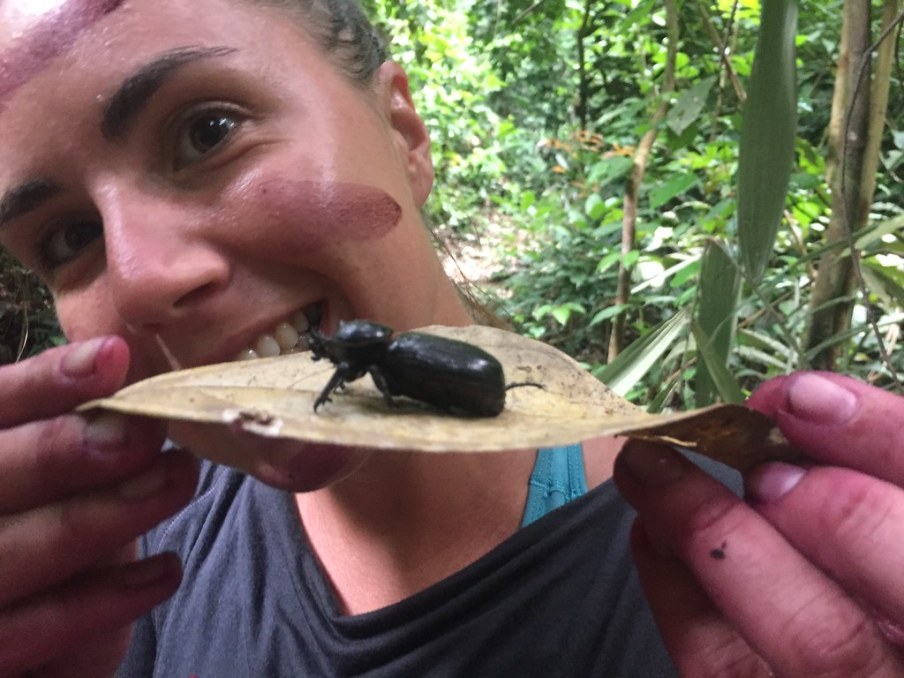 Another tick for the bucket list- we’ve conquered the Amazon jungle and it was FANTASTIC (well, for me anyway.)

On Thursday morning we took a very scenic flight from La Paz to Rurrenebaque- if we’d taken the bus it would probably have taken over 20 hours on unpaved roads- no thanks. From there it was on to a lovely hotel with views not unlike those on the Mekong Delta and a pool. So nice. Bright and early the next day off we went on a 5 hour boat ride up river to a wonderful place called Chalalan Lodge. The ride itself was great- amazing views the whole way and we were sat at the very front so had uninterrupted views: 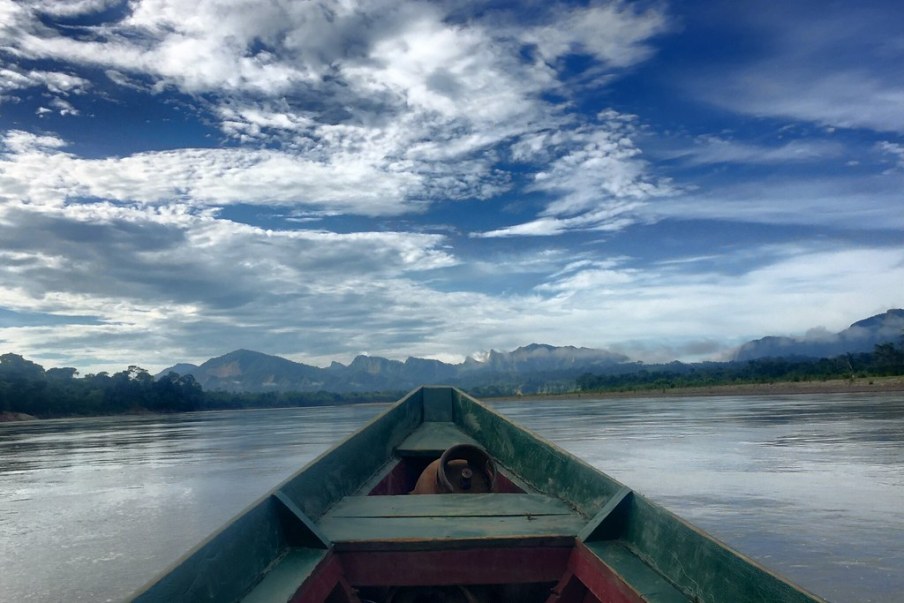 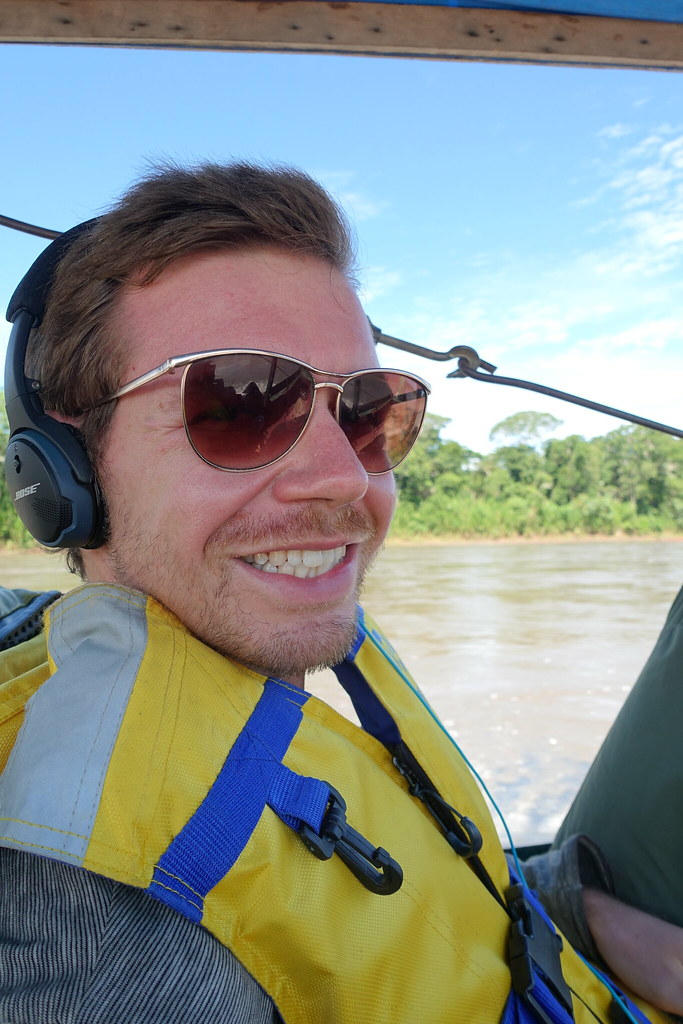 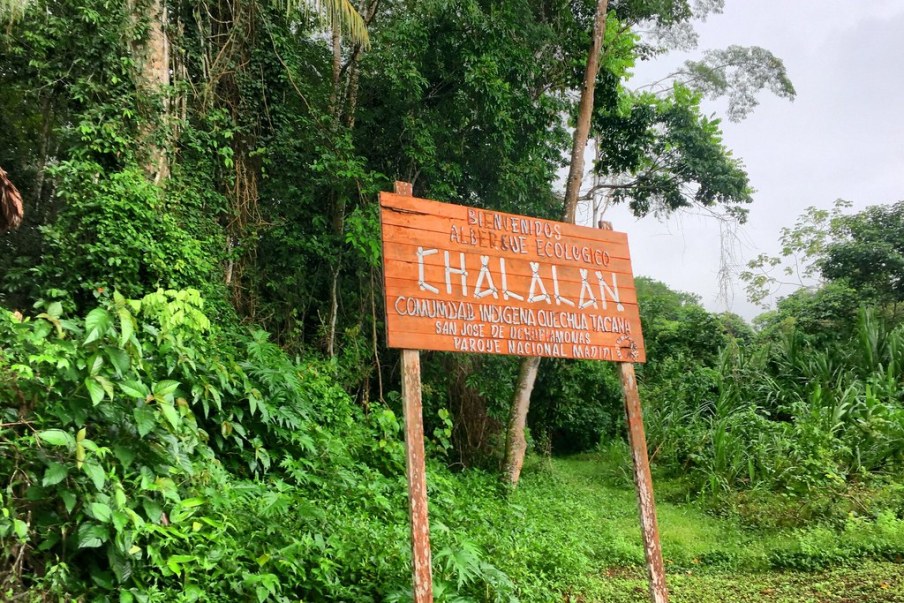 Chalalan Lodge is a community owned and run model for eco tourism, set deep in the Madiri National Park, one of the most bio diverse places in the world. It was set up 20 years ago to encourage community sustainability and educate tourists on the need to protect the park (it’s a pretty big area- over 19,000 sq km.) Although Chalalan does cost more than the privately owned resorts, 50% of the profits go directly to the community so that they don’t need to hunt and cut down trees in order to earn money. It has a capacity of only 30 people although when we were there there were only about 10 of us, which was really nice as it wasn’t crowded. We stayed in a ‘luxury’ cabin (see below for the jungle version of luxury) with lovely hammocks to lie in during the afternoons when it was too hot to go out. 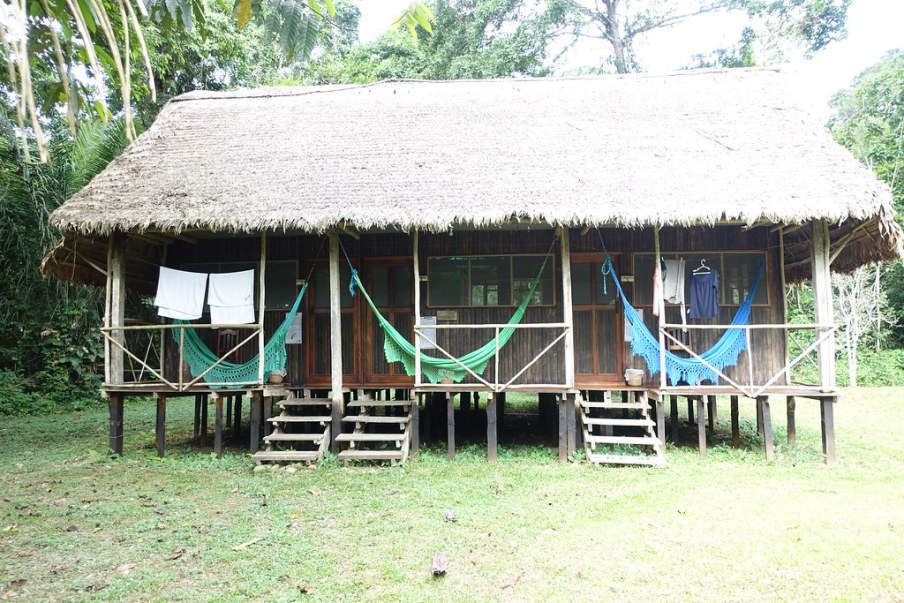 It’s always an early start followed by a 3 or 4 hour ( very hot and very sweaty) trail. After lunch it was time for a siesta and then around 3.30, it was out again for either another trail or a canoe ride to see cayman (a cross between an alligator and crocodile,) monkeys swinging through the trees or amazingly weird looking birds. After dinner, it was back out again in the pitch black on a night hike to see a completely different side to the jungle- huge spiders, deadly frogs, freaky looking insects, pirhanas and more monkeys (there were many many kinds.) Sam was not a fan of the night hikes- it turns out that he and the jungle are not destined to be friends. 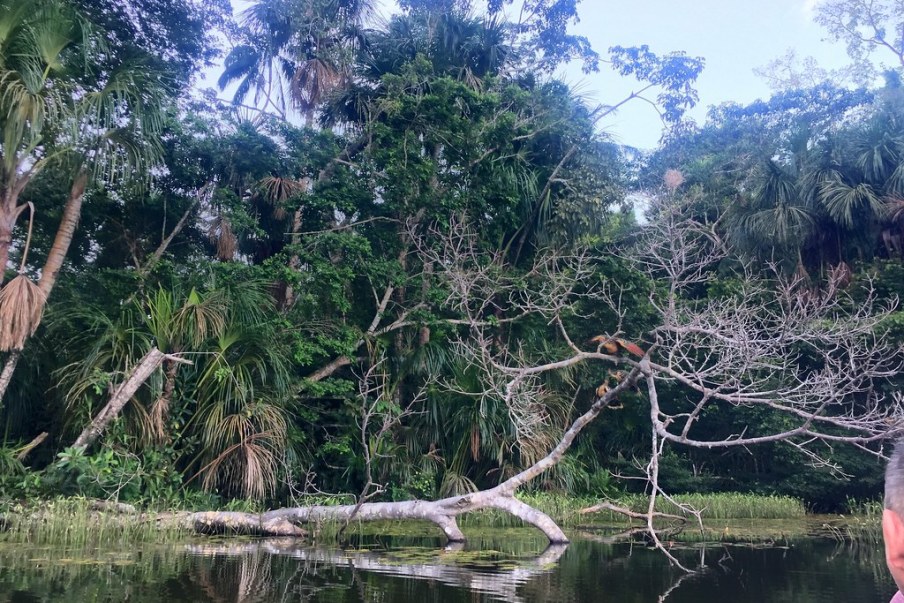 The trails were awesome- we learnt so much from our fantastic guide, Ronny. He grew up in the community which runs Chalalan and seemed to know absolutely everything about the Amazon. He could recognise every kind of animal, bird or insect from listening to it from far away (when we couldn’t even hear the sound.) Ronny showed us all of the different types of trees used to make traditional medicine and could spot poisonous spiders from about 20m away. 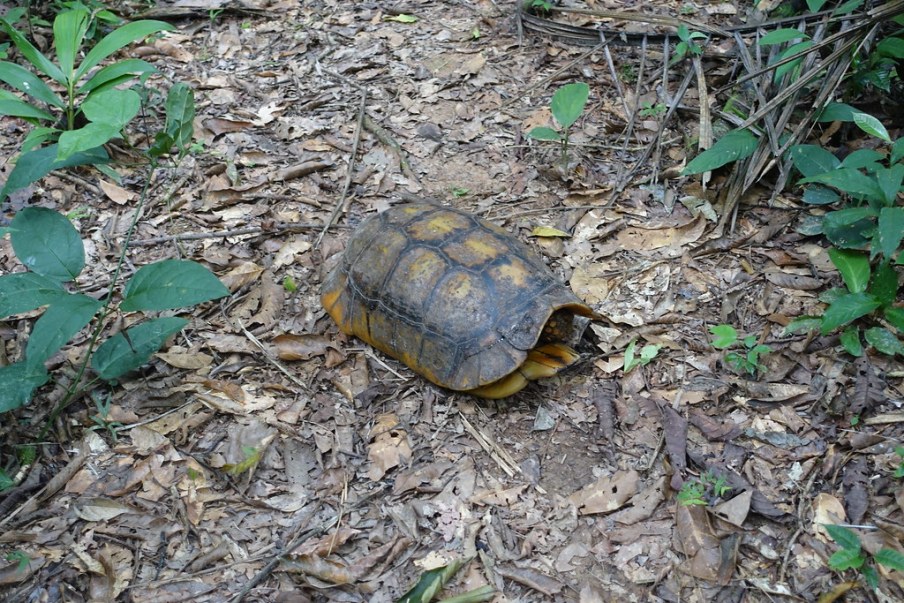 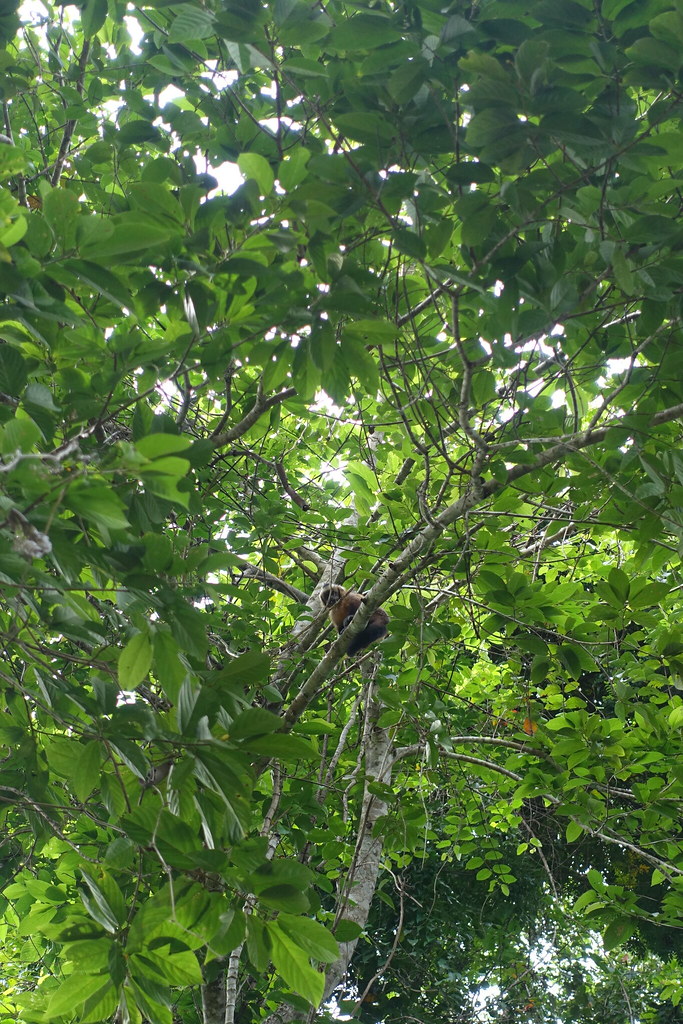 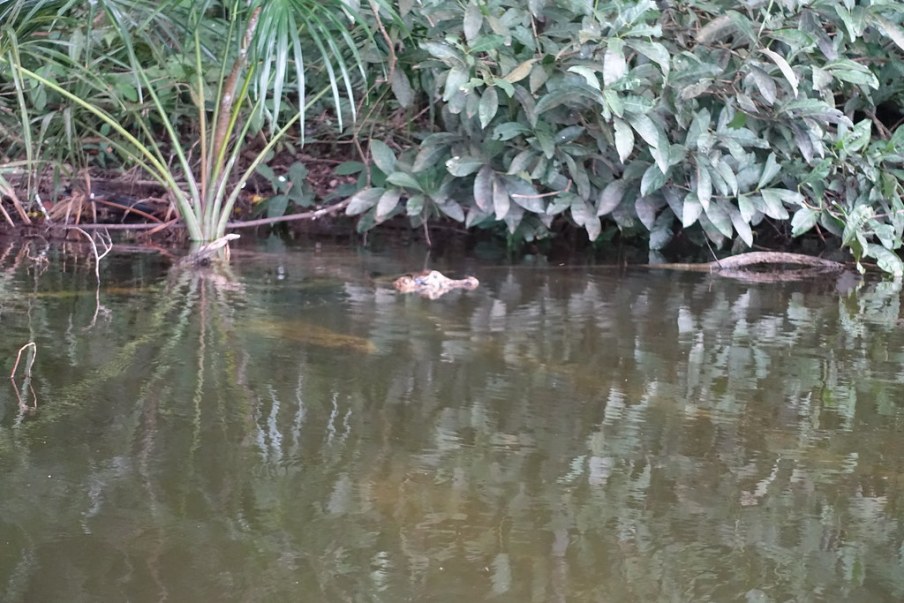 Cayman cruising on by 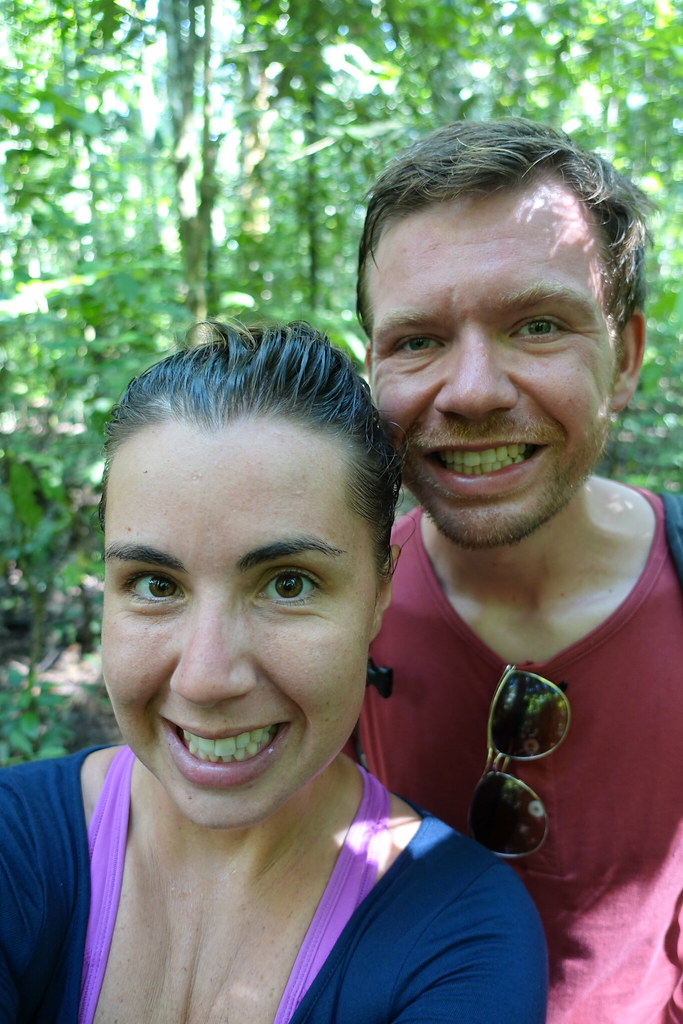 Now onto the bullet ants and big brave Sam.

Think of an ant, x it by 10 and add a massive venomous sting. This is what stung Sam on his foot as he stepped out a hammock. I’ve only seen him in pain like that once before, in Bali when he slammed a bit wooden gate onto his fingers. Sam described his foot as being both on fire and broken simultaneously. It took 5 hours for the pain to subside and the staff were on the verge of giving him snake venom antidote to try and help, after all of the traditional medicines and painkillers did nothing to help. We found out afterwards that usually the sting from a bullet ant can make your whole foot swell and the pain normally lasts 24 hours. Ouch. 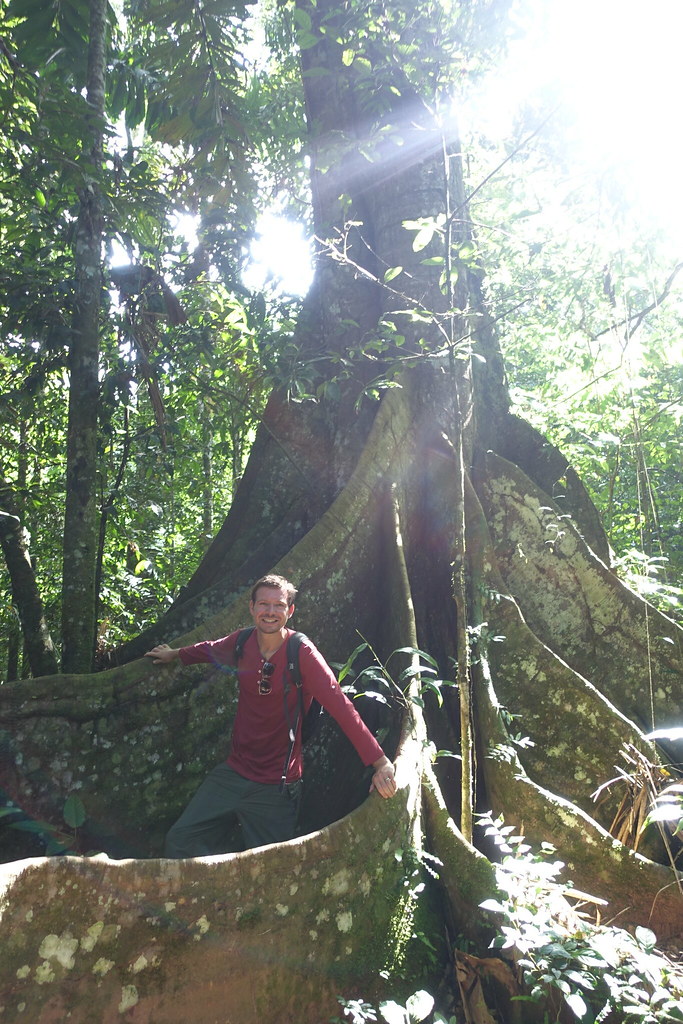 So, although not such a successful trip for Sam, I absolutely loved the Amazon jungle and would go back again tomorrow if I could. Even the mosquitoes (of which there were many,) could not dampen my spirits! 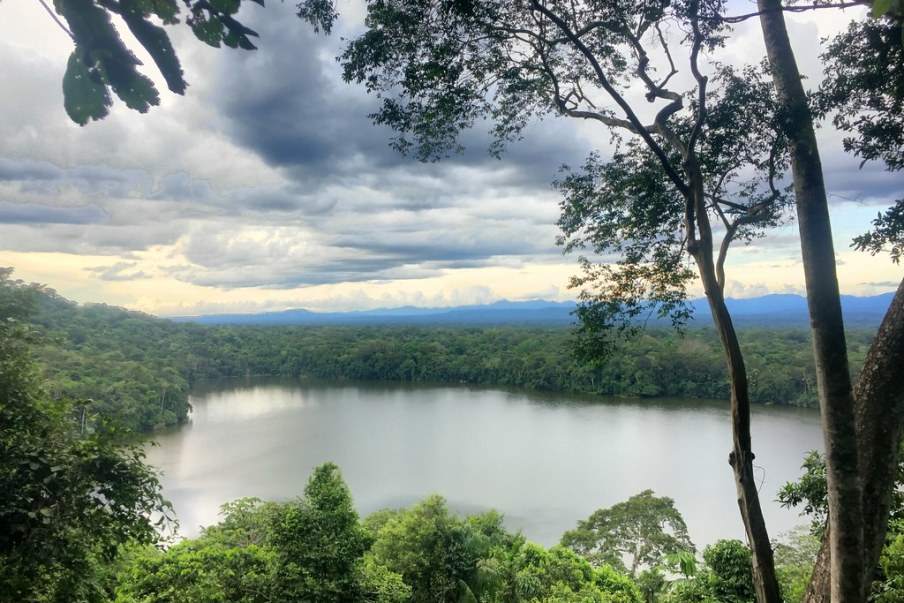 Lake full of cayman and pirhanas

So, that’s Bolivia done and dusted. At times it’s been challenging as we’ve been so tired but overall it has been a fantastic country to visit and we’d encourage anyone to go. Although still very much a developing country and having terrible wifi, it’s got so much going for it- from stunning architecture in Sucre, to the wonders of the the salar and the amazing diversity of the jungle.

Due to family circumstances, we’ve had to put our Peru and Ecuador plans on hold and return to the UK. We hope to resume soon as we have so much we still want to see but for the moment we won’t be updating the blog. 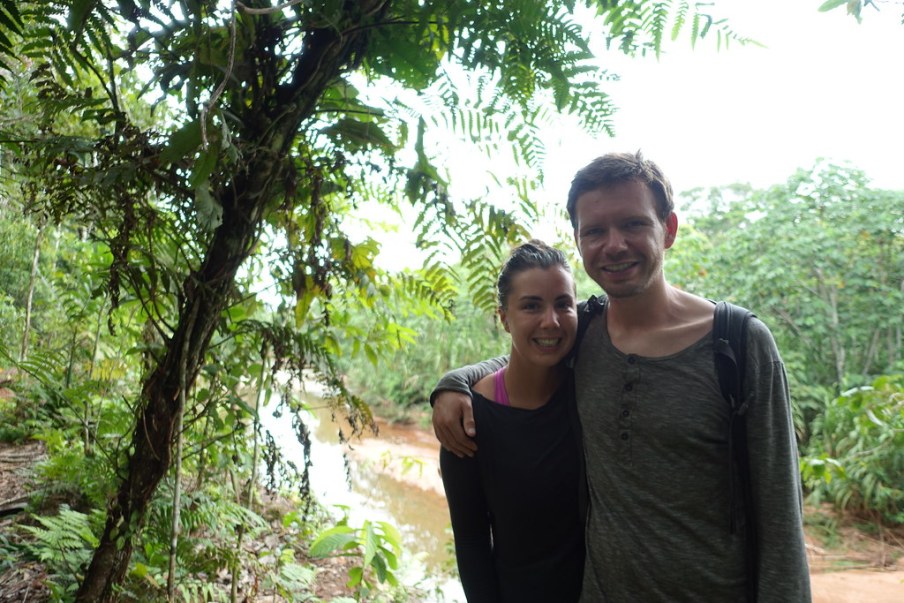