I’m very fortunate that it’s my turn to write this post as it should be a nice easy one- we’ve just had 4 of the best days of our trip.  When we were originally planning the trip we both knew very little about Bolivia, the main things being that (a) it has a really famous salt flat that’s the biggest in the world, and (b) it has a steam train graveyard. Those 2 items alone justified our entire foray into this country, and are very closely placed together in the south of the country in a place called Uyuni.

Although it’s obviously possible to do tours from Uyuni, we’d heard mixed reviews about the quality from there.  We (aka Laura) did some more research and found that tours also went from the town of Tupiza, several hundred kilometers away.  Although the town itself has nothing much to speak of (it didn’t have anywhere to even get a coffee,) we did get lucky with a really tasty pizza at some random place that wasn’t on TripAdvisor. La Torre tours offered a 3 night/4day tour which had great reviews.  We couldn’t book until we got to the town and were very worried we’d be stuck a day or two to get on a tour but we were fortunate and got on a tour the next day. 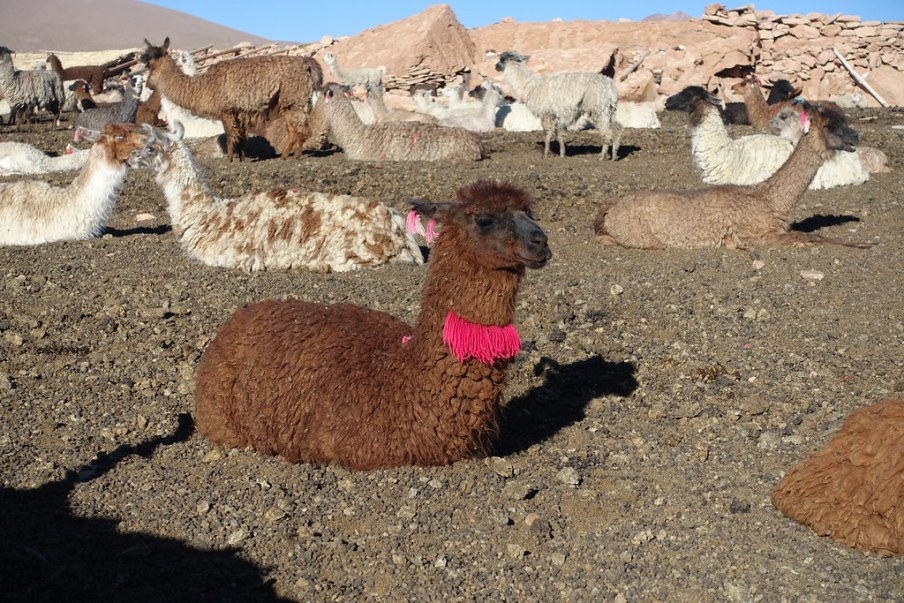 The tours work like this; there are 6 people in a Jeep- the guide, the cook, and 4 tourists.  We were very lucky to get paired with a lovely Belgian couple, Hortense and Louis, who were amazing company and really helped to make the trip be extra fantastic.  We spent a lot of time in the car- we were covering 150-300 km every day so it gave us a lot of time to get to know each other, plus we were eating and staying in a room together!  I can only imagine how horrid it would be if you got stuck with people you didn’t like; there were 2 Jeeps going from our company and most the people in the other Jeep would have made terrible companions.  We were surprised by the amount of Jeep time as we thought there’d be more walking but it didn’t turn out to be a problem.  The scenery was non-stop stunning and constantly changing and made for really beautiful driving.

The main attractions of the salt flat and the train cemetery were saved for the last day which is one of the reasons the tour works so well in this direction; the scenery and attractions get better and better each day.  The photos do not do it justice, but it was a truly special experience. You’re really out in the very middle of nowhere, and quite how the driver knew where to go was beyond us. Still, he never got us lost!  Neither the chef nor guide spoke any English, but we managed to muddle by with our limited Spanish and a lot of help from Hortense and Louis (thanks guys.) 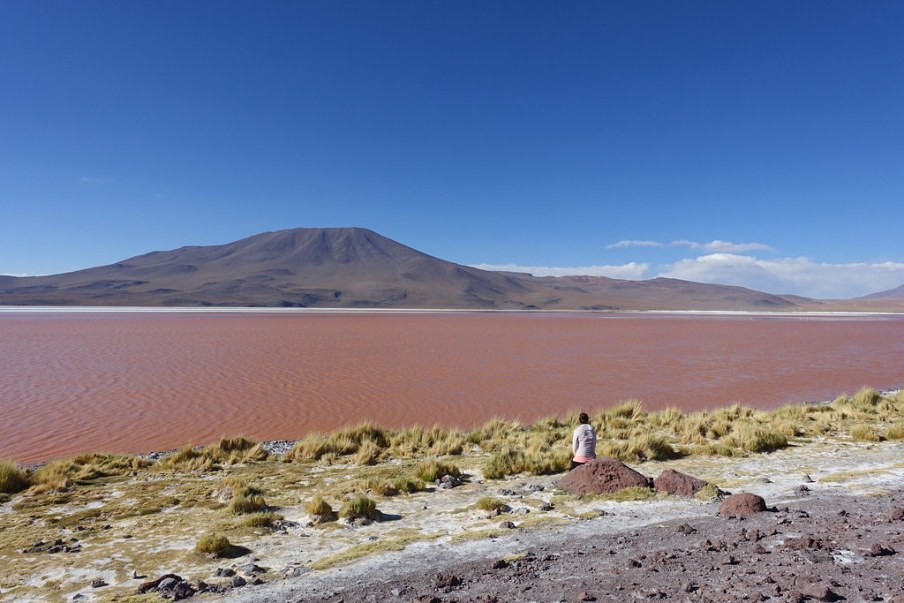 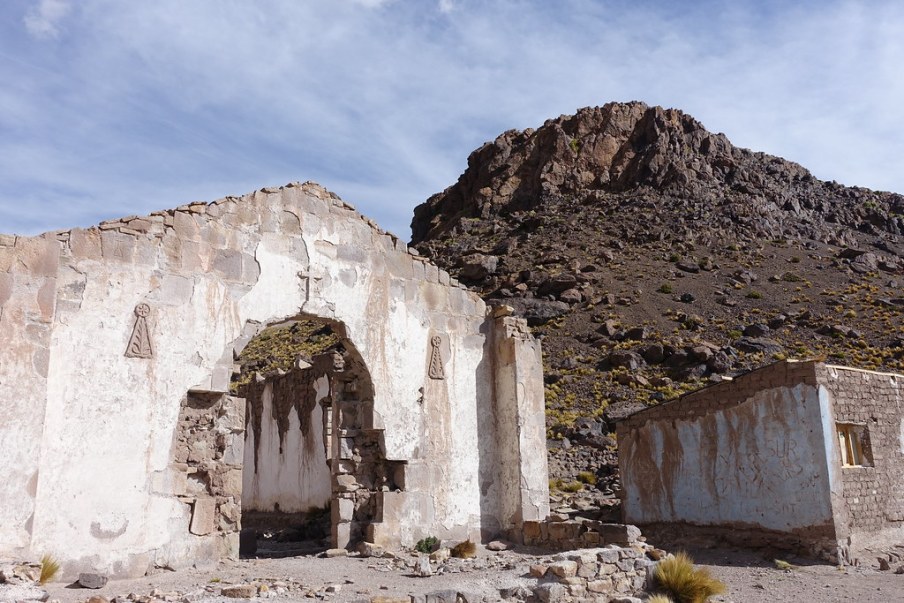 It’s really interesting because the lunch stops and evening accommodation all provided a kitchen for the chefs, but the chefs had to bring everything else; gas, food, drink etc.  There were entire buildings set up with these kitchens and communal dining areas. Very weird, but it seemed to work.  We were certainly impressed with the evening accommodation.  The tour operator had repeatedly warned us that the accommodation was very basic and low quality, and Laura had seen pictures of mattresses on floors, so we went in expecting the worst and were pleasantly surprised.  The beds were all comfy (Laura had the best sleep in months on the first night) with plenty of warm bedding, and we only had to share between the 4 of us so it wasn’t like a massive dorm.  We were always well fed (with plenty of snacks in the day too), and all of this came in under our usual daily budget as well! 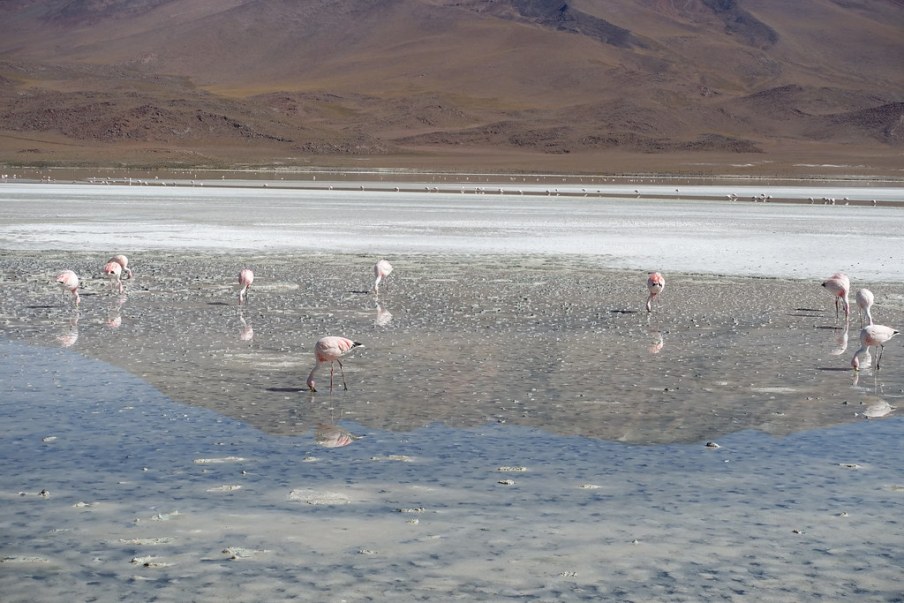 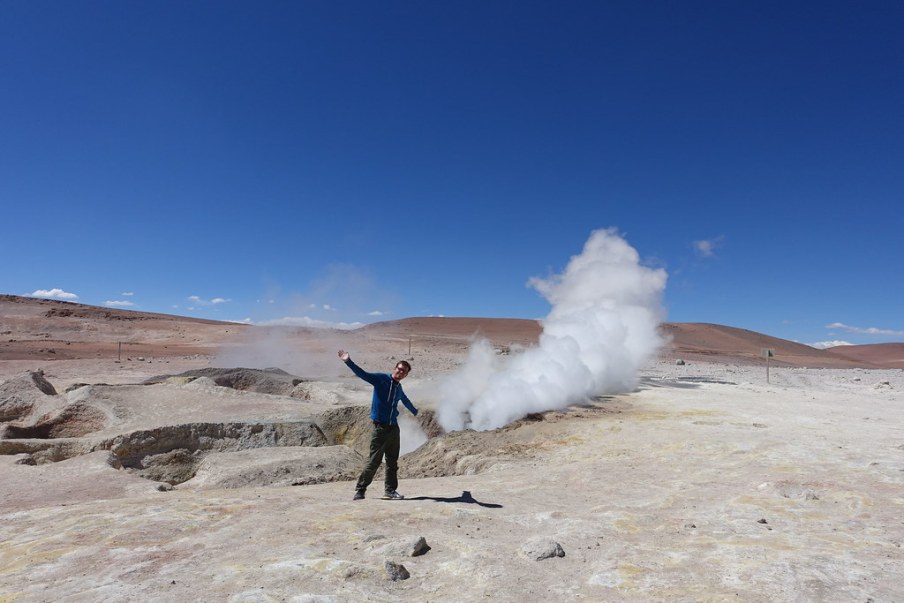 I guess the most obvious question is “What did you see for 4 days in a Jeep?” It’s hard to articulate as we saw so much, we really did see everything amazing that nature has to offer.  Valleys that looked like the moon, hills that looked like Mars, and so so many lagunas we lost count. Most with flamingos- which did not stand on one leg contrary to popular belief.  Each day offered something new, particularly with the changing altitude- at some altitudes the plains were full of shrubbery, in others we were in fully arid deserts.  We even got to go into a geothermal hot pool, as well as seeing pluming gysers firing up non stop clouds of sulfurous smoke.  We took over 1000 photos, although we’ve managed to narrow it down to 300 or so (and Laura will narrow that further for the blog!) 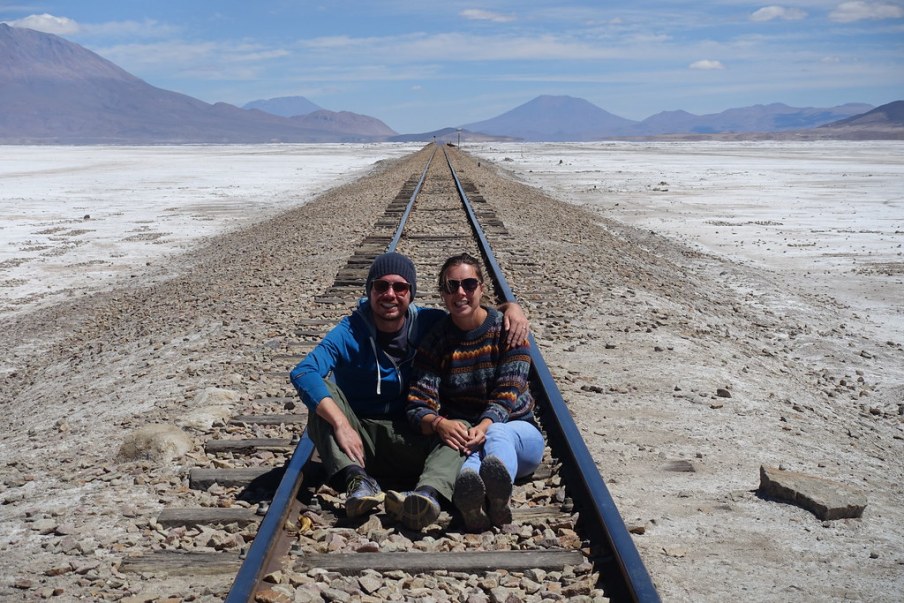 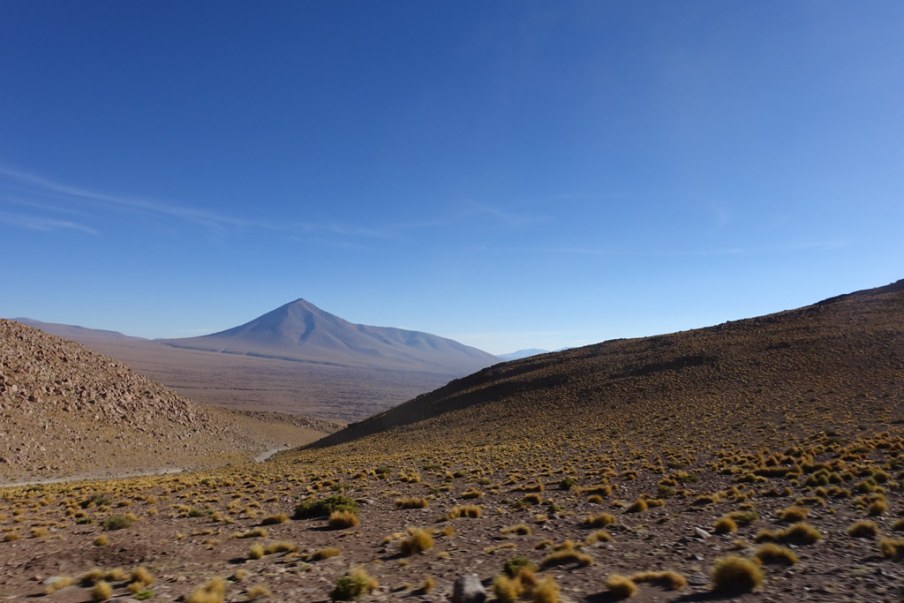 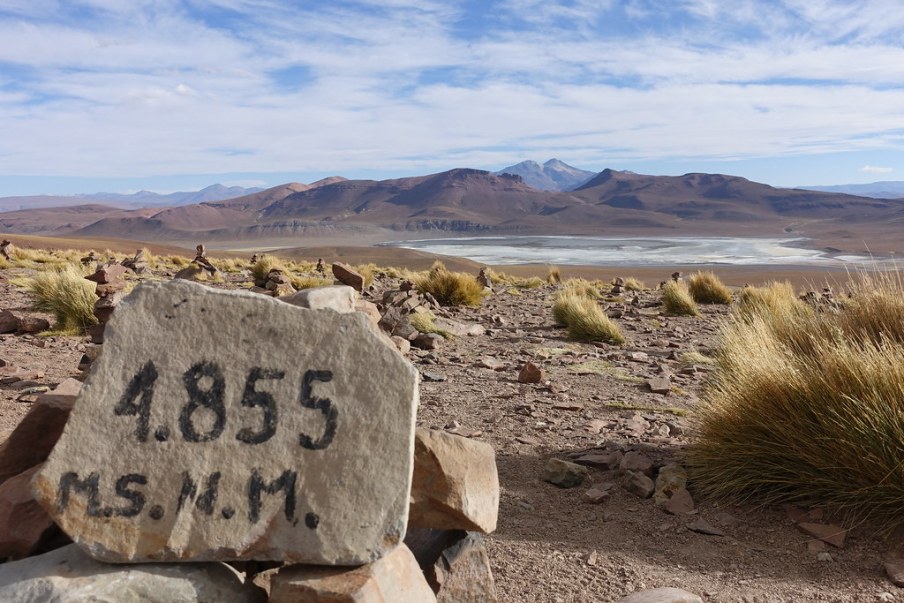 I’ll let the photos do most of the talking, but I really do need to cover the Salar. It’s truly insane. It’s over 10,000 sq. meters in size, which meant that after our 4:30am wake up call on the last day we had to drive for over half an hour to get to the middle- the whole thing is perfectly flat and made up of patterned white salt,  You can see nothing for miles and miles to the horizon, which made some brilliant mirages of floating islands.  There’s so much salt that our last night accommodation was in a salt hotel; they compress the salt into bricks and built a hotel! It was really very special. 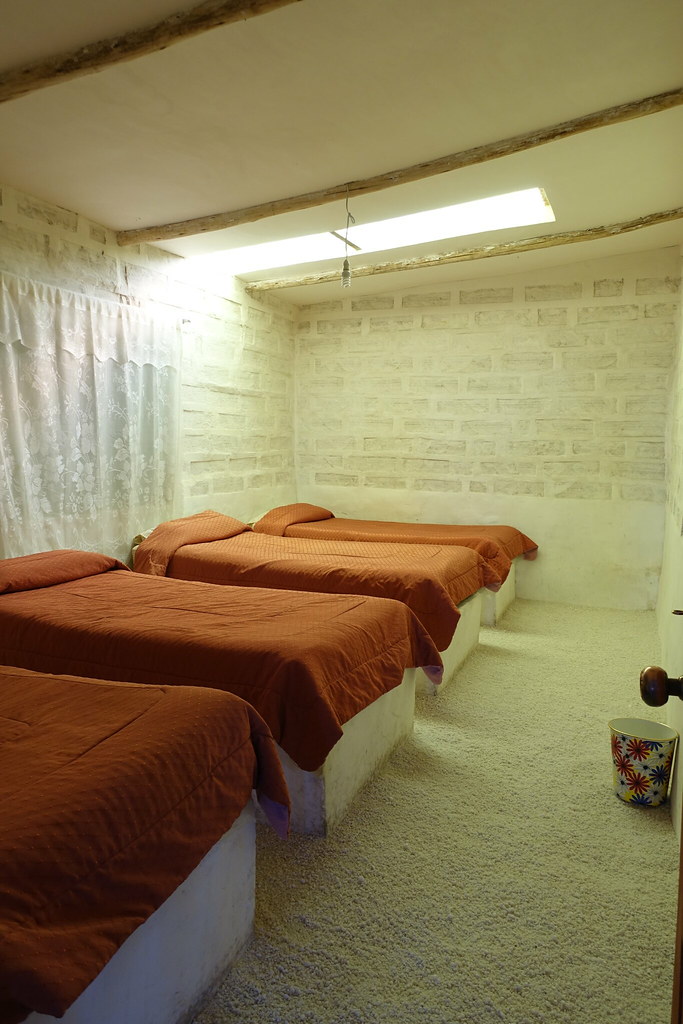 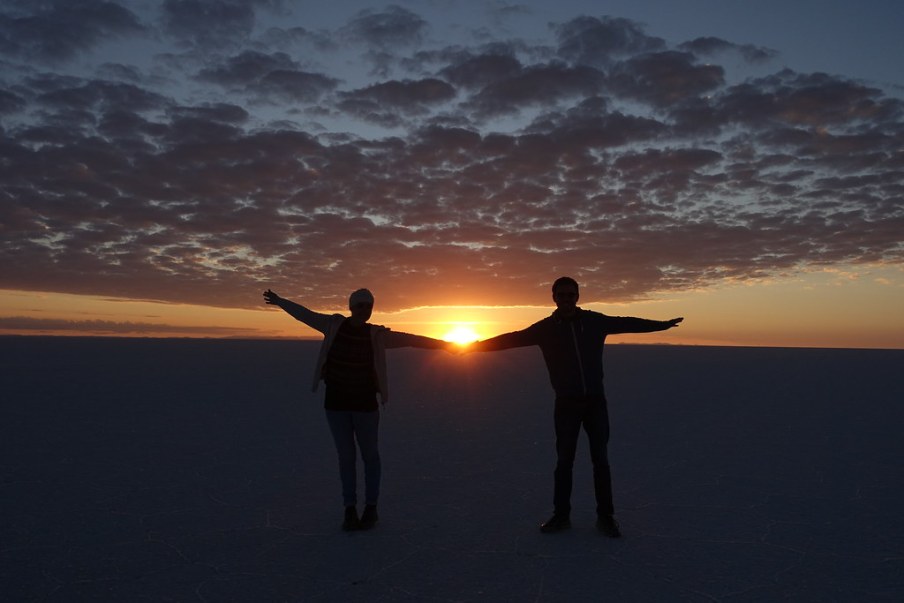 Had to wake up early for this one! 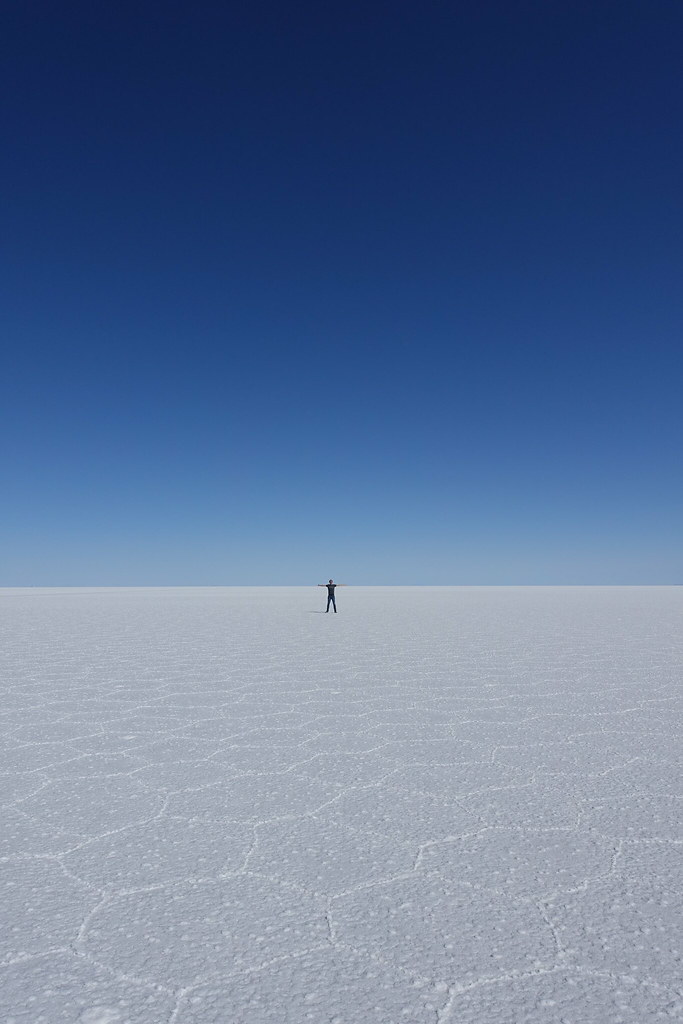 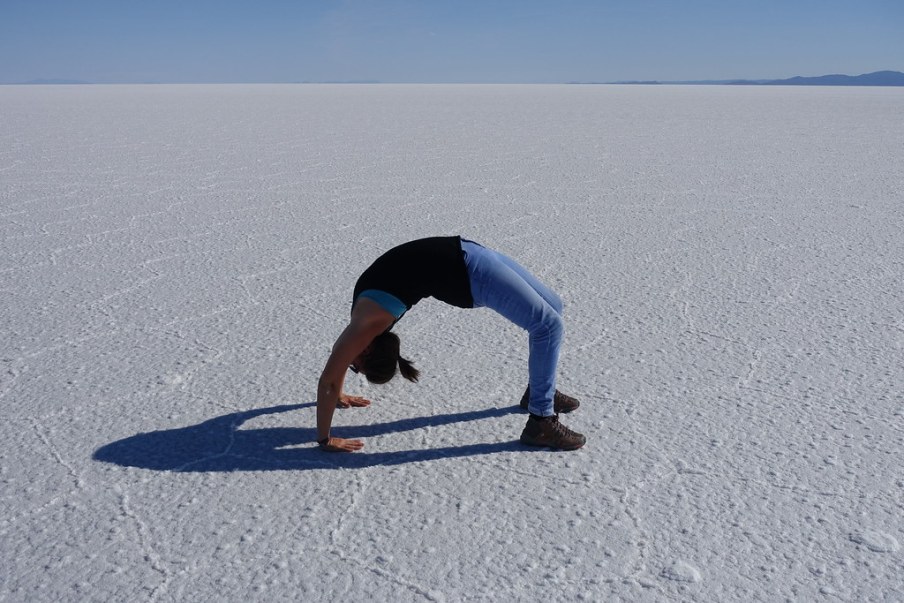 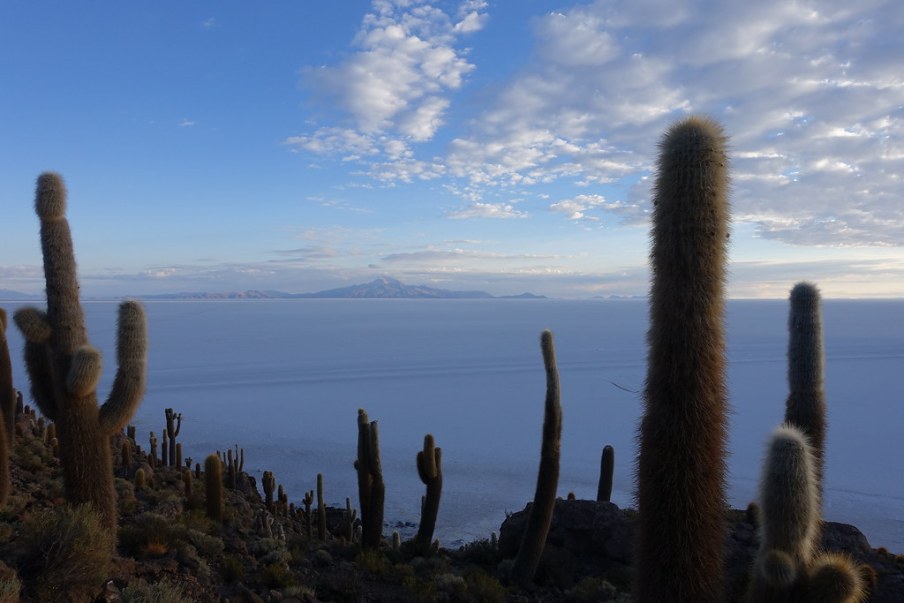 This also completely messes with perspective, which means you can end up with cool perspective shots like this: 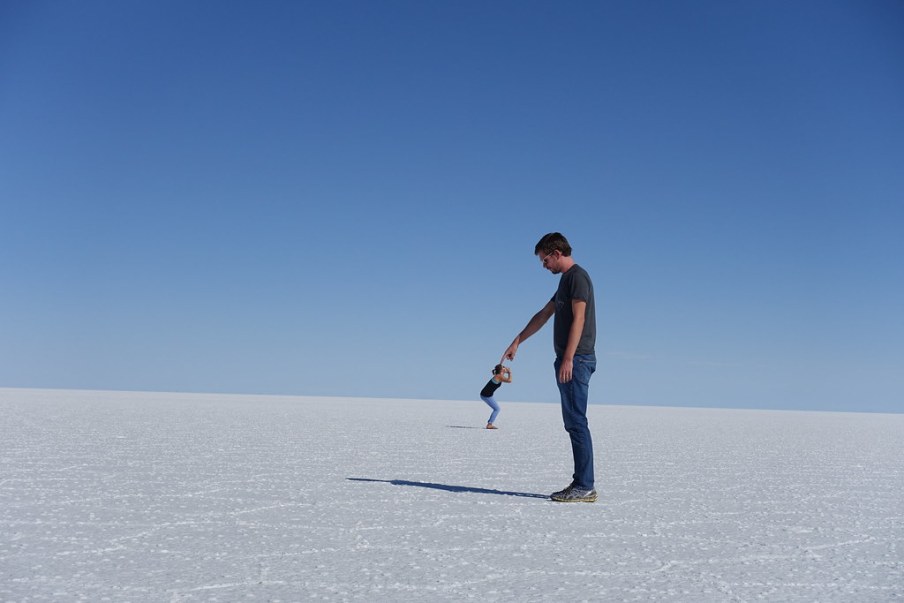 The final stop of the tour was the steam train graveyard.  As you can imagine, I was quite excited, but even Laura enjoyed it in the end.  Uyuni used to be the centre joining point of trains from Chile and Argentina, but when demand dropped they basically parked up all the trains and left them there to rot.  It’s an incredible site, and made a great adult playground with everyone climbing on top for some awesome photos. 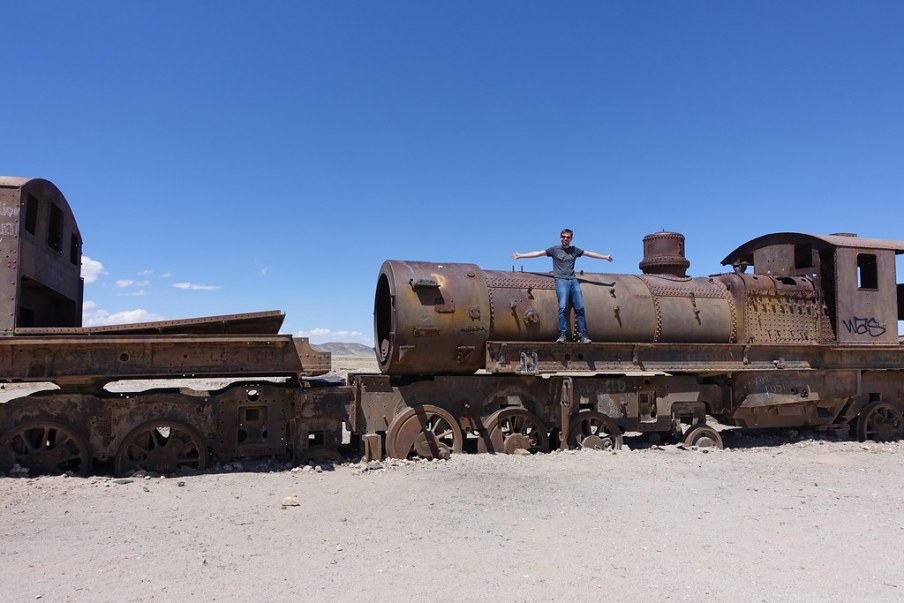 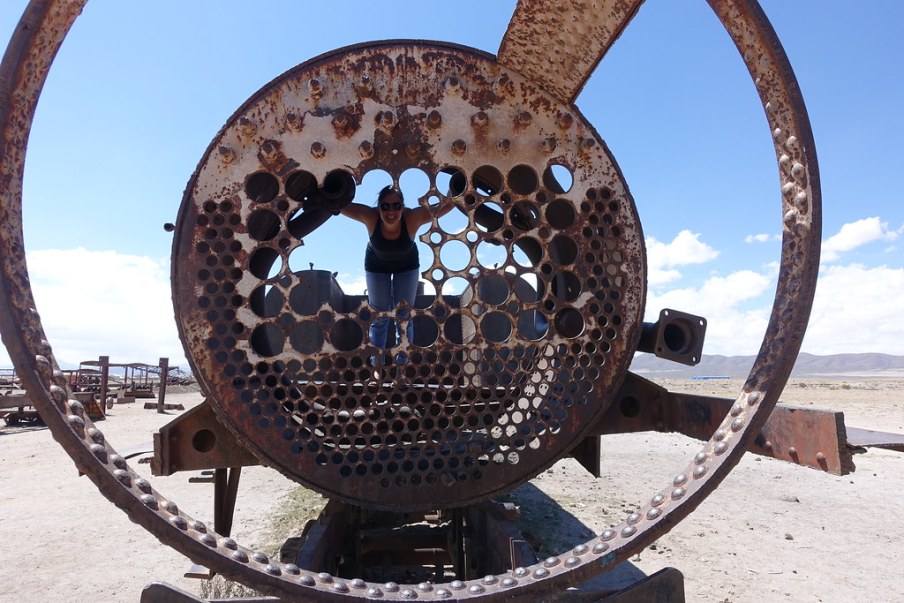 Whilst I think we both agree that Inca Trail remains our favourite activity, this has definitely been a close second.  And in a couple of days we fly to the Amazon! This kind of sums up how we feel: 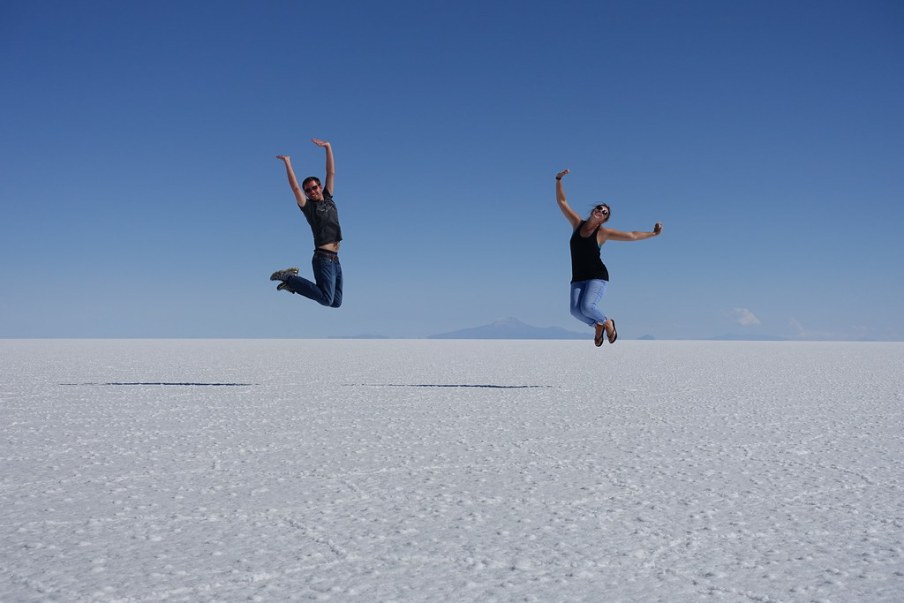